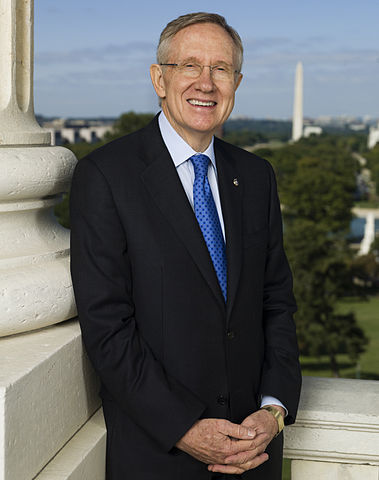 Last night, Bradlee Dean asked who’s to blame for the rise of tyranny in any society. He made an excellent case that those who let the tyrant take power, must blame themselves. Today, as Senator Harry Reid (D-Nev.) adds outrage to outrage, in and out of the United States Senate, we should ask ourselves that question again. Why is the Harry Reid Show not yet in reruns? Because we keep it going. We not only tune in. We produce it. And we can stop producing the Harry Reid Show.

The Harry Reid show and its (falling) star 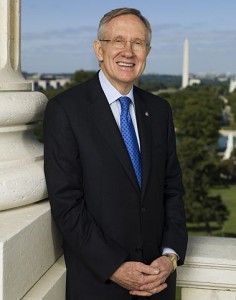 Harry Reid made the news several times in the past two months for saying zany things on the floor of the Senate. Who can forget them? “Lies” he cried on 26 February, talking about stories ordinary people told of trying, and failing, to get health insurance through government exchanges. Now he says he never said anything like that! Play the video below. Compare what he said then, to what he said this past week.

Did he simply eat too many meals someone cooked in an aluminum pot? Is his problem, then, Senile Dementia, Alzheimer Type? (He’s 75 years old. If he were eleven years younger, the doctors would call his condition “Alzheimer’s Disease” instead.) Reasonable, except for one thing. He fills his official Senate Web page with that kind of sentiment. He has built, with tender loving care, a portal to all his hobby horses. They include the Koch Brothers, against whom he must have a draft Bill of Attainder ready to go as soon as his colleagues somehow amend the Constitution to let them pass it. Harry Reid learned well from the ancient Senator Marcus Porcius Cato Censor. That worthy famously said, “Oh, by the way, Carthage must be destroyed” every chance he got. Charles and David Koch could flatter themselves, that Harry Reid heaps on them the vitriol an ancient Roman heaped on a whole city. Which means Harry Reid is bitter, scheming, and conniving, but not crazy. He knows exactly what he is saying every time he says it.

He also knows how to get rich on a Senator’s salary. CNAV does not mean to say that $175,000, the present annual salary of a Senator, is hay. It ain’t. But it is relative alfalfa  compared to the rocket-like rise in Harry Reid’s net worth since he entered politics. That rise has sparked rumors of sharp practices, especially in real estate. Compared to that, his giving tens of thousands of dollars of campaign money to his granddaughter is chicken feed.

So much for Harry Reid’s sins. Now let’s look at ours.

How to cancel the Harry Reid show

That’s right, ours. For someone should have canceled the Harry Reid Show long before it got as absurd as it is today.

Start with the voters in the First (Las Vegas) Congressional District in Nevada. They  first elected him to the House in 1982 and re-elected him in 1984.

Continue with all the voters of Nevada. They elected him to the Senate in 1986. And they have re-elected him and re-re-elected him ever since. They had their chance to elect a far better candidate, Sharron Angle, in 2010. And they blew it.

Now continue with all voters in all States. This is not just a matter of how Harry Reid got to be Majority Floor Leader. It is about how he got to be any kind of Floor Leader: the seniority rule.

What would happen if, in the upcoming Senate elections, voters in every State having a Senator standing for re-election, voted to send a new Senator to Washington? What if each such Senator-elect pledged to overthrow the seniority rule in the Senate the instant he or she took the oath of office?

Then at least the two Caucuses would choose their leaders on merit, not merely on someone having served long enough. So what if the people of Nevada still refuse to retire Harry Reid in 2016? They no longer will have the excuse, “He’s senior, so he can bring home the bacon, and we can’t afford to lose that.” How senior a Senator might be, wouldn’t matter. One election would weaken the seniority system fatally. Two Senate elections could destroy it forever.

A two-thirds majority can do more than that. The Constitution reads in relevant part:

[The Senate] may, with the concurrence of two-thirds, expel a member.

The House, too, but that’s beyond scope here. (Except that two-thirds of both Houses, and three-fourths of State legislatures, could agree to limit terms of service in the House, the Senate, or both.) This much is in scope: the good people of Nevada could cancel the Harry Reid Show forever in two years if they wanted to. The rest of the country could cancel it in four. So why don’t we?