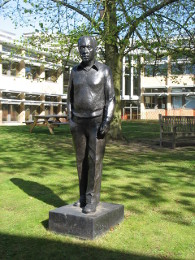 Almost without fail, any critic of creation science will utter the phrase peer review to suggest creation science has no merit. The premise: only by peer review can any scientist be sure he is reading something truly important, and not insubstantial junk. True enough, some men claiming to be scientists, do not follow the scientific method as closely as they should. But sometimes “peer review” can become a means to exclude new ideas, whether they have merit or not. So lack of “peer review” does not necessarily deny merit to a new idea.

Juan Miguel Campanario is a physicist at l’Universidad Alcalá de Henaris (Madrid, Spain). He also made himself an expert on peer review and peer review abuse. His publication list includes thirty-nine papers on scientific communication alone.

Two of these speak volumes. In one, he asks, “Have referees [peer reviewers] rejected some of the most-cited articles of all time?” His answer: Yes! From his abstract:

A set of 205 commentaries by authors of some of the most-cited papers of all times have been examined in order to identify those articles whose authors encountered difficulty in getting his or her work published. There are 22 commentaries (10.7%) in which authors mention some difficulty or resistance in doing or publishing the research reported in the article. Three of the articles which had problems in being published are the most cited from their respective journals. According the authors’ commentaries, although sometimes referees’ negative evaluations can help improve the articles, in other instances referees and editors wrongly rejected the highly cited articles.

And what might those articles be? How about Frank McFarlane Burnet’s 1960 paper on antibody response? When a British journal rejected it, he published it himself. And won the Nobel Prize in Physiology and Medicine.

Or how about Hans Adolf Krebs, he of the Citric Acid Cycle that bears his name? The journal Nature rejected his claims. But he won the 1953 Nobel Prize in Medicine. Today every high-school student hears about the Krebs Cycle. (And medical students hear a lot more about it. As this correspondent, who holds the degree of Doctor of Medicine, can directly attest.)

So much for the arrogant claim that failure to publish in a “peer-reviewed scientific journal” automatically disqualifies the proponent of any given theory or hypothesis from serious consideration. Some of the same people who so state, could not imagine biochemistry without the Krebs Cycle. And rightly so.

Campanario is not the only scientist to ask how wise it is to rely solely on peer review to decide what ideas are worth thinking about. Sir Fred Hoyle said something far more scathing. In Our Place in the Cosmos, he said this:

Rather naturally, it is the ambition of most scientists to become a leading figure in such a major advance. Some succeed by ability, others by luck, and still others, unhappily, by design and deception. The trick is to pretend that a major advance has been made, when in fact there has been none. To achieve such a deception, a cabal of scientists, rather than a lone individual is usually needed. Speaking with one voice, a cabal is often able to shout down lone individuals working in other directions and eventually, by gaining control over what material is published, in scientific journals and what is not, a cabal can in the end wipe out all opposition.

The most flagrant case of peer review abuse is the building of a false consensus in favor of “global warming.” The Climate-gate Archive of 2009 holds names, dates, and other evidence that an abusive cabal existed and still exists to promote the global warming narrative. And they shouted down the skeptics by the precise methods Sir Fred condemned.

Sir Fred did not finish with this. He warned this kind of phony consensus-building can slow down scientific progress in related areas. And that, “more than any other factors,” can destroy a society.

Sir Fred Hoyle was not a creation scientist. He and Chandra Wickramasinghe, in the work cited above, advocated spontaneous panspermia for the origin of life. (And not as a one-off event, but a repeated process that continues today.) But his warning about a cabal of “scientists” more interested in promoting a narrative than objectively judging an idea is no less valid for all that. As this correspondent mentioned, they see a fundamental problem with “peer review” as editors and referees practice it today. The Climate-gate Archive holds clear and convincing evidence of such a cabal that controls climate research. Why shouldn’t any advocate for the creation model suspect the same sort of cabal working to suppress all but one narrative of the origin of the universe, the earth, and life?

Peer review: the right way and the wrong way

Peer review has its place. But to make it work as its proponents advertise, editors and referees must think and act critically. Which means: like fair and objective judges, not as secret advocates for one idea or another. (From the Greek krites a judge, from krino I judge, whence words like endocrine and exocrine). Only those who dedicate themselves to a search for truth, not personal advantage, can be fair and effective peer reviewers.

Related Topics:evidencescientific theory
Up Next