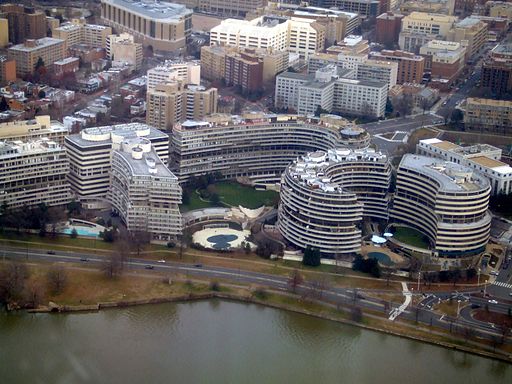 Ladies and gentlemen, introducing Cover up 2.0. Most of you, reading this today, will not recognize this as the second version. Cover up 1.0, for anyone who does remember, was Watergate. In the summer of 1972, Watergate stopped being the name of a famous hotel in Washington D.C. The name became a label for the most serious sort of government malfeasance. Watergate was about burglary, wiretapping, and theft of documents from political opponents and even from confidential professionals, specifically a psychiatrist. Cover up 2.0 is more serious. It is about using the taxing power to destroy political speech. But this time, Cover up 2.0 might succeed where Cover up 1.0 failed. The reason: the heroes that stopped Cover up 1.0 in 1972 1974 have no counterparts today.

For the benefit of those who did not live through that time: in the summer of 1972, after the Republican National Convention, several men broke into the headquarters of the Democratic National Committee in the Watergate Hotel in Washington D.C. They rifled through the files and held up and photographed several papers. Police and security guards arrested them. News came to President Richard M Nixon. He chose to cover it up. I remember well what he then said:

I want you all to stonewall it. Let them plead the 5th amendment, cover up or anything to save the plan. 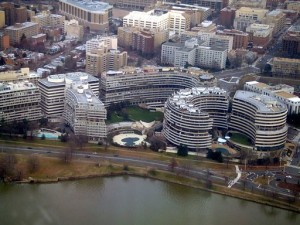 A photo of the Watergate Complex taken from a DC-9-80 inbound to Washington National Airport on January 8, 2006.

Nixon’s men could not save the plan. Nixon was almost as much of a megalomaniac as Barack Obama is. He installed a tape system to record every P:residential word. Those recorders were running when Nixon spoke those words, and other words even more incriminating than these.

Nixon won that election, as history records. But the Congress was in the hands of the Democratic Party, as was the mainstream press. Both demanded independent investigations. Nixon appointed one special prosecutor, Archibald Cox. He then fired him, but had to appoint or another. Leon Jaworski, of the great Houston law firm of Fulbright and Jaworski, was made of sterner stuff. He knew about the cover up. And he knew how to break the cover up. So he sought to get hold of those tapes from that Presidential tape system.

U.S. District Judge John Jay Sirica had the burglars in his court. He knew they did not burglarize that office on their own. He made them tell on their bosses. Eventually he ordered the White House to surrender the tapes. The white house tried to buy time. They sent edited transcripts. (Now you know were the phrase “explosive deleted” comes from.) That did not satisfy the judge. He ordered the White House to turn over the physical tapes. Nixon’s men appealed, but the United States Supreme Court ruled unanimously (per curiam) that the White House must surrender those tapes.

This they did. The differences between the edited version and the real version destroyed the cover up. Even Republicans on the House Judiciary Committee changed their votes. Several Republican representatives trooped into the White House, asked to see Mr. Nixon, and almost demanded that he resign. He did, in August of 1974.

Where are the heroes of today?

But where is the John Jay Sirica of today? For that matter, where is Leon Jaworski? Barack Obama will not have to appoint a special prosecutor. The Republicans control the House, but the Democrats control the Senate. They are determined to protect the prestige of the man now holding office as President. They keep this attitude, though we now have evidence of a worse cover up than Watergate ever was.

Lois Lerner, who supervised the handling of applications for tax-exempt status, now claims that computer problems destroyed 2 years of emails between herself and certain officials within and outside the Internal Revenue Service. This recalls the 18-and-a-half-minute gap in one of the Watergate tapes. Mr. Nixon’s secretary, Rosemary Woods, made the gap. She pressed an erase pedal on the particular reel-to-reel recorder she used. She said it was an accident. No one believed her then. No one should believe Lois Lerner today. Fault-tolerant servers usually handle electronic mail today. Lois Lerner complained of problems with the hard drive on her own workstation. But corruption of a workstation would not affect the email server. Even if it did, government agencies have regulations that call for keeping hard copies of electronic mail. So where are the hard copies? If they are not available, then someone erased these documents, involving her and six other officers, from the servers. And either no one made hard copies of the emails in question, or someone burned or shredded them.

But again, we have no John Jay Sirica to order the IRS to produce these documents. We have no Leon Jaworski to press the matter.

And we have no Senator Sam J. Ervin, Democrat of North Carolina,  to hold the White House up to ridicule, as Ervin did during cover up 1.0.

How did you expect to liberate Cuba by perpetrating a burglary in Washington, D.C.? [Laughter from the gallery]

Nor do we have a Woodward or a Bernstein, the two reporters who destroyed cover up 1.0 in The Washington Post. The prevailing opinion at the Post is that Barack Obama might be a tyrant, but he is their tyrant. They will do whatever they can to excuse Lois Lerner and the obvious cover up of her activities. At the same time, they will excuse those same activities, as necessary to protect democracy from “evil corporate robber barons.”

That is why cover up 2.0 will succeed. It has the support of those who really matter and it has no opposition where opposition would matter.

Related Topics:electionevidencehistorypoliticianspresidenttaxTea Party
Up Next

IRS scandal: par for the course