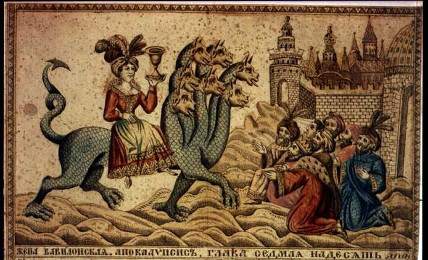 While many preachers say that all biblical prophecies have been fulfilled, there are a few that remain unfulfilled and are puzzling – especially the ones that prophesy about Iraq. Don’t bother looking for the word “Iraq” in your Bible. You won’t find it. You will, however you will find Babylon, which is modern day Iraq. But don’t be confused, the Bible speaks about two Babylons – the physical country of Iraq and “mystery” Babylon, which is a one world government. For these purposes, only physical Iraq is being discussed.

The Bible also refers to the Medes and Persians. Persia was Iran and Media consisted of parts of Iran, Iraq and Turkey (much of the area occupied by the Kurds today). After 549 B.C., when Cyrus defeated Media, the area under Persian control remained the most important provinces of Persia. These ancient countries under their modern names now occupy center stage in the world of politics.

As with all unfulfilled prophecies, anyone who tells you that they can be absolutely sure how these prophecies will be fulfilled are either delusional, ignorantly confident, or a liar. There are many prophecies that can be fulfilled in a number of ways, including the ones I am about to discuss. So, please understand that I am only suggesting that perhaps the foundations for these prophecies are now being set – and that we should start paying attention.

The Book of Revelation, chapter 16 speaks about “end time” disasters commonly referred to as “The Bowls of Wrath.” Verse 19 states:

Now the great city was divided into three parts, and the cities of the nations fell. And great Babylon was remembered before God, to give her the cup of the wine of the fierceness of His wrath (emphasis added).

The underlined words make it clear that Babylon (Iraq) is divided into three parts. Of course the Bible also tells us that God is very angry with Babylon, but that’s another discussion for another time – as is the timing of all of this. But – is it possible that the division of Iraq into three parts is what we are about to witness?

Isaiah 13:17 and following also states some interesting prophecies concerning Iraq at the end of time. It says:

Behold, I will stir up the Medes (the Iranians, Turks and some Iraqis) against them, who will not regard silver; and as for gold, they will not delight in it. (verse 17).

Also their bows will dash the young men to pieces, and they will have not pity on the fruit of the womb; their eye will not spare the children (verse 18).

These two verses tell about a time well into the future for Isaiah when the Medes (a group of people of Iranian, Iraqi, and Turkish descent) will invade Iraq and they will be exceedingly brutal and slaughter just about everyone without mercy. As far as I’m concerned, that sounds very much like ISIS today.

I will backtrack a moment. Verse 1 of Chapter 13 begins with a topic sentence that tells us this is the “burden against Babylon.” This “burden” implies that what is about to be described in the following verses are not just man-made atrocities; these occurrences are actually God’s judgment against Iraq and in addition to the Medes brutality, God’s judgment against Iraq will be also be accomplished through those whom God has called (see Isa. 13:3).

In verse 19 and following, we are told that this disaster that falls upon Iraq will not be limited to the carnage imposed upon it by the Medes. It will be extended to the physical/geography of Iraq. It states:

And Babylon, the glory of the kingdoms, the beauty of the Chaldeans’ pride, will be as when God overthrew Sodom and Gomorrah (verse 19).

It will never be inhabited, nor will it be settled from generation to generation; nor will Arabian pitch tents there, nor will the shepherds make their sheepfolds there (verse 20).

The passage goes on but it is interesting to note that Sodom and Gomorrah were so annihilated by God that only some scant and unverifiable evidence of its existence can be found today. In the case of Iraq, it will be completely uninhabitable but we will know where it once existed. When I couple this with verse 3 that tells us that others are involved in the decimation of Iraq, I come to the conclusion that perhaps someone eventually drops a nuclear bomb on the country.

This is a lot to process but consider that if things get so abhorrent in Iraq, and that those referred to as the “Medes” are able to spread their evil to our country, is it possible that at one point an American president will have no choice but to unleash the full force of nuclear power on the area? This is not a pleasant thought but it will fulfill the prophecies in Isaiah. The bright side of this argument is that if this were to occur as I have hypothesized, then we (the American people) may be God’s sanctified and mighty ones referred to in verse 3. While the prophecy in its entirety makes me shudder, the thought that America may be sanctified by God – in spite of all the depravity we see today – is encouraging. More than that, it inspires me to keep fighting the good fight. After all, it is not who we are in the eyes of the world that matters; it is who we are in the eyes of God that matters more than words can express.