It does America no good to complain and to go about cursing the darkness. It is time for the American people to light a candle and lead the way for the future of our posterity.

Many older folks today in this country have little or no good thing to say about the up and coming generation, as if to excuse themselves in one way or another concerning their posterity.

Do you remember, “wisdom is justified by her children (Luke 7:35)”?

The pupils are not the problem. The teachers are. 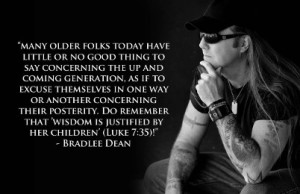 I was speaking at a high school assembly in Pelican Rapids, Minnesota, where there was a teacher who complained about the students in her school. I turned and said to her, “You complain about what you raised up. The fruit that you complain of is the fruit of your tutelage.” She acted as if the students were the problem when, in fact, they were and are not the problem. She simply did not like her own reflection.

On another occasion, I spoke at an assembly in the state of Wisconsin. The principal, acting as if the kids were cattle, said to me, with a smirk on his face, “Science and history books are being changed every three to seven years,” and “whatever starts at the top goes down to the bottom.” Little did he know that I would write his comments for the nation to read. Yet, this is the care I see in some of the teachers and principals I have dealt with. His statement has some truth, however, because it is the teachers that are rolling over in the face of “International Baccalaureate,” “No Child Left Behind” and “Common Core.”

Though a violation of the 10th Amendment, the fallout of federal education is stupefying. More than 700,000 students who graduate high school each year cannot even read their own graduation diplomas.

As a matter of fact, it was Bill Bennett, the secretary of education under Ronald Reagan, who said, “The longer you stay in school in America, the dumber you get.”

Now that we know how far some of the “educators” are willing to go, regardless of what they teach, how are the students responding?

While teaching the students their Constitution and exposing “No Child Left Behind,” out of nowhere comes a little man waddling down the aisle asking to speak to me for a couple of minutes outside because of his concerns over the music we played before our presentation. (The Christian principal, who just got back from her Bible study, did not like the fact the we were singing Christian lyrics during our music session.) I told the superintendent that if he cancels this assembly, it will backfire – and backfire it did! Seven hundred students in unison started to shout out, “Let him speak! Let him speak!”

The iconic in utero surgery picture. Photo from Vanderbilt University Hospital, through “Arrival of the Fittest.”

During this particular assembly, I was showing a picture of a baby in the womb that was taken during surgery. The baby’s tiny hand was captured grabbing the doctor’s finger. Of course, I was advocating life!

All of the sudden, the principal interrupts the presentation and tells the students, “If this offends anyone, you can leave now.” Friends, I was advocating life, not death. One teacher and one student, who was believed to be the teacher’s daughter, got up and walked out. It was as if the Lord put his hand on that student body and said “Don’t you go anywhere!”

After a couple of minutes, the principal returned and said that there was an emergency and the school assembly program was over with. Obviously, he did not approve of advocating life.

They are asking, “What do we do?” How are you answering them?