Today most Americans will acknowledge that this is a Christian nation – or a nation founded on Christian principles. These have accepted the national philosophy that has been passed down for generations but they have accepted it blindly and cannot defend their belief, which makes their beliefs vulnerable to assaults of nefarious revisionists. Fortunately, our Founding Fathers fully understood the importance of establishing a solid republic on Christian principles.

The Christian and social duty: to resist

Resistance to tyranny becomes the Christian and social duty of each individual…Continue steadfast and, with a proper sense of your dependence on God, nobly defend those rights which heaven gave, and no man ought to take from us. (History of the United States of America, Vol.II, p.229.)

American Christians today would do well to meditate on Hancock’s words. 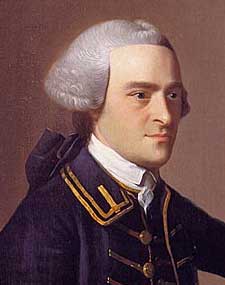 This raises another question: why is resistance to tyranny the Christian’s social duty? Of course we understand that tyranny is not a desirable form of government, but why is it anti-Christian? Hancock went on to say that our dependence should only be on God and we are to defend the rights that heaven bestowed upon us. In a tyrannical government, the government and its leaders become the sole arbiters of our rights. Worse, to preserve their power, they create a dependence on them and their government usually through rules and regulations that strangle their citizens in the form of unjust laws and taxation. The principle of unfair taxation and over-regulation that allowed for the confiscation of property was well understood by our Founders. In the Declaration of Independence the phrase “the pursuit of happiness” was often interpreted to mean the rightful possession of personal property. And our Founders also had a deep appreciation for the fact that our rights come from God and not from any government or any government representative. However, the differences between tyranny and freedom are more extensive than whom one may depend or your right to the fruits of your own labor. Tyranny is also anti-God in other ways. Tyranny overrides our rights to make our own decisions and thereby places itself above God Himself. In the Garden of Eden God told Adam and Eve what was right and what He expected of them; however, He allowed them to make their own decisions. Tyranny extends no such allowance. A modern-day tyranny can be described as tax dollars that finance abortion, despite the moral convictions of the one being taxed. In this case, the tax payers’ liberty of conscience is overridden by internal revenue laws. Regardless of what the taxpayer thinks is right or wrong, the federal government dictates the terms. 2 Corinthians 3:17 states:

The elements of liberty

[ezadsense midpost] Liberty requires that a person be able to make their own decisions about what is right and what is wrong, and by choosing what is right they insure the future of liberty. God did not create little robots that do His will without exercising any choice of their own. He created thinking people whom He gave the right to exercise their own will and make their own decisions. Tyranny is the antithesis of this principle. William Penn understood this well. He once stated:

Penn, as well as John Adams, also understood that God’s moral codes are fundamental to the propagation of liberty. Without God’s moral codes, government has to step in and create rules to govern a people that will not govern themselves – and eventually even the most altruistic governments become power-crazed and tyrannical – believing they know better about what is good for the collective good than their citizens. John Adams stated:

Our Constitution was designed for a moral and religious people…it is wholly inadequate to govern any other.

It is wholly inadequate because people who do not know right from wrong will inevitably make the wrong decisions, partly out of wickedness and partly out of ignorance. The link between Christianity and our free Republic was also commented upon by Noah Webster, a Revolutionary soldier, a judge, a legislator, and educator, and of course known best for his dictionary. He said:

The religion which has introduced civil liberty is the religion of Christ and His apostles…This is genuine Christianity and to this we owe our free constitutions of government.

The difference between knowing right from wrong and tolerance is frequently misunderstood in America. This misunderstanding has led to the labeling of Christians as being “intolerant” when just the opposite is true. It was the Christian faith that established the principles of liberty and freedom that this country was founded upon. Liberty allows for free will, which is tolerance at its finest. The confusion occurs because the God of the Bible also establishes a moral code that tells us what is right and wrong. Understanding the difference between right and wrong does not translate into dictating and imposing our preferences on someone else. Although we are required to boldly proclaim what we believe, we are not directed to impose our will upon anyone. Liberty cannot exist in an intolerant nation, but it also cannot exist in a nation that prefers what is wrong over what is right, which will result in chaos and the need for government interference, which will eventually result in tyranny. This distinct difference is also what sets America apart from countries that hold elections but prefer religions other than Christianity. For instance, the God of the Bible establishes the Law of Free Will in the Garden of Eden, while the God of the Koran establishes Sharia Law that dictates what is right as interpreted by Mohammed, which cannot be questioned or violated upon severe penalty of law. The God of the Bible tells us that we should not be a respecter of persons or to show partiality (James 2:1-13). On the other hand, Mohammed was the first to enslave black Africans based solely on their skin color. In America, the eighth and tenth Commandments are honored by enforcing our right to keep our own property; while in Communist countries, the collective needs of the majority trump anyone’s right to keep the fruit of their own labors.   Of course this somewhat noble aspiration to help those with less has always been perverted into helping those in power to have the ability to confiscate anything anyone owns and to dictate anything anyone should or should not believe. These nations have always outlawed Christianity, which is the belief system established by the author of Liberty. If a liberty-loving nation is to survive, those who love liberty must be able to defend what they love. Liberty is far more than being able to chose one’s profession or where one lives; it is a right given to us by God – not granted to us by government. Although the Bible establishes right and wrong and tells us how we should best live, it is tolerant and does not dictate to us what our choices should be or even that we should chose what is right. It allows us to make those choices for ourselves. In the past, America thrived because its citizens valued liberty and understood how to live righteously. Today, as more and more Americans chose what’s right in their own eyes without regard to God’s moral codes, our liberties are slowly slipping away. And government is doing what government always does, establishing its own set of moral and civil codes. Unfortunately, governments are run by flawed men and women who have become wise in their own eyes – unfortunately, in their own eyes is the only place their wisdom reigns and America is suffering as a result of their foolishness.

Fruits of the founders