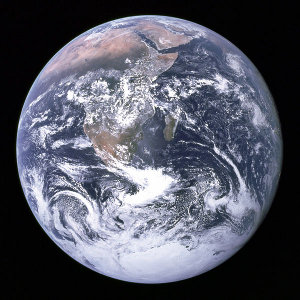 The Global Flood unleashed more violence on the world and humankind than any other single event before or since. But can modern humans cite it for instigating cancer? Yes.

On 2 January 2015, Alice Park, at Time magazine, published this article. According to her, as much as sixty-five percent of all cancers develop at random, from the patient’s own stem cells. Whenever a stem cell divides, it can copy itself in error. Such errors often lead to cancer. The more divisions, the greater the risk.

To show this, Park cited this study by Christian Tomasetti and Bert Vogelstein in the journal Science. The study gives the details to back up this finding. Tomasetti explained it in detail to Park:

Think of cancer as the risk of having an accident if you are driving a car. If you drive the car on a cross country trip, your risk of an accident is much higher than if you take a local trip to the grocery store. The risk correlates to the length of the trip. The trip to the grocery store might be thought of as bone cancer, which has few stem cell divisions. While the cross country trip might be more like colon cancer, which has many more cell divisions.

Jennifer Couzin-Frankel, an editor at Science, summed up the grim finding. She also had to defend the work two weeks later. Many took the study authors, and journalists like Park, to task for “oversimplifying” the finding.

Walter T. Brown, of the Center for Scientific Creation, took notice. Again he has revised his comprehensive work, In the Beginning: Compelling Evidence for Creation and the Flood. He believes he knows why human (and animal) stem cells mutate as often as they do. The answer goes back to the Global Flood.

How could the Global Flood cause such a problem? 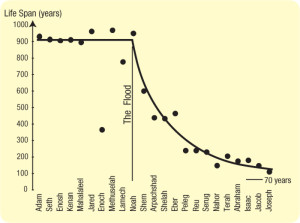 The decline in the human life span after the Global Flood. The life span declined exponentially in eleven generations. Credit: Walter T. Brown Jr./Center for Scientific Creation. Used by permission.

Brown has long sought to answer a question from Genesis chapters 5 and 11. Did people really live, on average, 900 years before the Global Flood? And why don’t they live so long today? Why did the human lifespan fall ninety percent in eleven generations?

His answer: People did live 900 years before the Global Flood. After that, the human life span did decline. And, he says, it declined exponentially. The Masoretic Text of Genesis chapter 11 shows this most clearly.

Noah (Hebrew: “rest”) and seven other people survived the Global Flood. He lived 950 years. But his son Shem lived only 600 years. His other descendants lived for even less time than that. The problem cannot be genetic alone. (If it were, why would it affect Shem and not Noah?) He put it down to three causes, in this rough order of increasing importance:

How long ago did this happen?

Nearly two years ago, Walt Brown gave an astronomical answer to that question: 3290 BC, give or take a hundred years. Now he believes this new finding on cancer and mutations lends further support to a recent event involving widespread nuclear changes.

In fact scientists have known to connect cancer with rare genetic mutations since the middle of 2012. Again in Science, Jacob Tennessen and colleagues identified hundreds of rare mutations in human genes. They further said those mutations came recently into the human race. How recently? 5,115 years before the year they submitted their article. They submitted it in 2012. So the mutations first appeared in 3103 BC.

Remarkably, Wenqing Fu and colleagues repeated the Tennessen study with a larger sample. They carefully examined the genomes of Americans of both European and African descent. And found the same thing, regardless of race or continental origin.

Which manuscript should we accept?

So secular geneticists have found, repeatedly, a set of recently formed, rare mutations powerful enough to cause cancer in human beings. They also found those mutations appeared in a population that grew rapidly, with nothing to thin them out. They might not know it, but that rapid growth could have begun with eight people. The Bible, of course, says it did.

But Brown has two problems. First, his astronomical date does not agree with the genetic date from Fu, Tennessen, and others. Second, he has three manuscripts to choose from: the Masoretic Text, the Septuagint, and the Samaritan Pentateuch The three manuscripts do not agree. Brown has also told this Examiner another problem: he does not accept the numbers in any of the three manuscripts as hard-and-fast. He believes all three are subject to rounding error. Most of the ages at the birth of the named sons end in zero or five. Scientists almost never regard such numbers as precise to the last year.

Mr. Mike Brown (no obvious relation) has studied the problem himself. He published this line graph plotting age at death against the generation number for all three manuscripts. Except for the special case of Enoch, this graph stays nearly flat until the Global Flood, then declines sharply. Mike Brown points out the Septuagint seems to show part of that decline as almost linear. In the other parts, and in every part of the Masoretic and Samaritan Pentateuch sequences, the life span declines even faster than exponentially. In fact it fits a reciprocal power function.

On the other hand, the Masoretic Text cannot give the correct numbers in every generation. The Global Flood must have taken place earlier than 3103 BC. To compute the earliest date from the Masoretic Text, one must assume a Long Sojourn in Egypt, a Late Birth for Abraham, and Ussher’s numbers for the Hebrew Kings. These assumptions yield dates of 2563 BC for the Masoretic, 3343 for the Septuagint, and 3213 for the Samaritan Pentateuch. This leaves the Masoretic Text out. The other two would fit.

The Long Sojourn in Egypt (430 years) has increasing scholarly support in creation-oriented Egyptology. The Late Birth and Ussher numbers likewise are easier to defend than their alternatives. So one can find a date for the Global Flood consistent with these assumptions. Astronomy gives one estimate. Human biology and medicine give another. The estimates do not agree. But the medical estimate gives the latest the Global Flood could have happened, not a “window” like Walt Brown’s astronomical estimate.

Well, to begin with, Walt Brown’s comet method of calculating the Flood date is invalid, as you’ve heard me say before. Monte Carlo simulation using his formula for the standard deviation of predicted comet perihelion dates shows that there is no nice Gaussian distribution of possible dates for the closest grouping of perihelia over the last several thousand years. Blah blah whatever you don’t care because Dr. Brown says otherwise. Moving on.

Tennessen and colleagues did not say that hundreds of rare mutations came into the human genome 5115 years ago (give or take the years since publication). They fit a bunch of demographic models to the genetic data and got the best fit with a model in which the European and African populations started rapidly expanding at that point. It’s not remarkable that Fu et. al. used the same date, because they were _explicitly using Tennessen’s demographic model to do their own analysis_.

I’m astonished that you would use either study for support for a young-Earth argument, since the results of both of them are based on models that invoke conditions that you would reject completely. For example: that African and European human populations diverged ~51,000 years ago, and that the European population underwent a bottleneck ~21,000 years ago. The model proposes a population growth rate of 0.38% per 25-year-long generation for almost 45,000 years before the growth rate jumped to ~1.8% _per generation_ as of 5115 years ago. You might note that this model does a poor job of matching current population numbers. You can draw your own conclusions about that, I guess. 204 generations (5115/25) at 1.8% increase per generation starting with 8 people would give us a world population of what, about 305 people today?

These same studies showed that the average age of all single nucleotide variations (SNVs) was ~34,000 years in European-Americans and 47,000 years in African-Americans. SNVs shared by the two were older; >100,000 years old. However, there were a lot of very low frequency SNVs that were much younger – on the order of 5,000 – 10,000 years old. Furthermore, if you try to just pick out the SNVs that you think might be deleterious, you find that 77-91% of those arose in the last 5000 years. It’s not that the mutation rate jumped 5000 years ago though, rather the population did. According to the model, more people = more copies of genes floating around = more chances to develop SNVs. Novel SNVs occur at a roughly constant rate per person ; the more people per generation, the more SNVs. Deleterious SNVs get culled from the population by selection over time so that they do not persist for long. Really bad ones are immediately fatal and don’t get passed on at all; the closer you get to neutral the longer the SNV can persist in the population. That’s why the deleterious SNVs are typically 100,000 years.

Whatever; you don’t care again. The point is that you want to cherry-pick this date of 5115 years ago because it matches your narrative while ignoring the fact that that date emerges from a model you can’t countenance. If you reject the model, then you can’t make use of the result that it provides. The same math that says “these mutations are <5000 years old" also says "and these other ones are 104,000 years old", which is a bit of a deal-breaker for the Flood narrative.