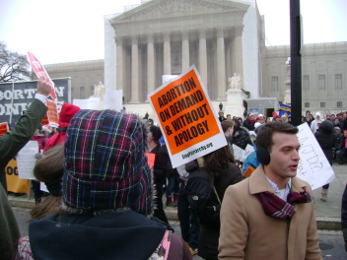 This third week of January, many in the press and many media outlets will be covering rallies and special events to commemorate the life of Dr. Martin Luther King, Jr. and the Civil Rights movement that he personified. How much press and how much media coverage will be given to the rallies and special events held to protect the civil rights of the unborn – the helpless – those who cannot speak for themselves?

Where are these civil rights leaders today?

A large percentage of those involved in the birth of the Black Panther movement in the 1960s were women. Regardless of their ideology, these women were fighting for what they believed to be right and a violation of their God-given civil rights. Where are they today to fight for the annihilation of their innocent children and the civil rights of those who cannot fight for themselves?

Where are the protesters who filled the streets of New York chanting that black lives matter? Have any of them showed up at abortion clinics to protest – or did they just go there for abortions?

Although it is estimated that minority women comprise 13% of America’s female population, they are responsible for approximately 36% of the abortions. It has been reported that over 17 million black babies have been aborted since Roe v. Wade. The Alan Guttmacher Institute reported that black women are more than five times more likely than white women to have an abortion. And as for those black children that are allowed to live, over 72% of them are born out of wedlock. For the most part, these children and their mothers are condemned by the mother’s poor choices. So, where are the Titus women today who are helping the younger women make good life decisions? (See Titus 2:1-5)

It is undeniable that the civil rights of black citizens were abused in this country. It is also undeniable that the civil rights of many black children are still being violated 50 plus years after Civil Rights laws have been signed and Jim Crow laws rescinded. Unfortunately, the abuse is not coming from racially motivated proponents; it is coming from mothers who are delivering their own children into the murderer’s hands. Pastor Clenard Childress, Jr. on his website BlackGenocide.org states: “The most dangerous place for an African-American is in the womb. Martin Luther King, Jr. would agree. He said: the Negro cannot win as long as he is willing to sacrifice the lives of his children for comfort and safety.”

Should we trust SCOTUS regarding life issues?

In 1973, the Supreme Court of the United States found in Roe v. Wade “…the word ‘person’ as used in the Constitution does not include the unborn…” In 1857, in Dred Scott v. Sanford, SCOTUS found blacks to be “…a subordinate and inferior class of beings.” And yet many believe that abortion must be okay because it is legally permitted. Do these same people believe that slavery was okay because it was legally permitted?

Should we apply a candidate’s pro-life views as a litmus test for voting?

Today it is appropriate to celebrate and commemorate the victories and the heroes of the Civil Rights movement of the 1960s, but that celebration should be tempered by the knowledge that we as a people still have a long way to go. As long as anyone’s civil rights are being violated, no matter if that person is living inside or outside of the womb or how that violation is rationalized, our nation still has blood on its hands. You see, it’s not just that black lives matter; it’s that all lives matter. And…as a nation of people who supposedly celebrate equal rights, we all have a responsibility to protect, defend and fight for the rights of all – not for just a defined group. Doing anything less makes us all hypocrites of the worst kind.

I can’t seem to find where this quote is from: “the Negro cannot win as long as he is willing to sacrifice the lives of his children for comfort and safety”.

Can someone provide more details for the attribution?

The question was asked in this article:

Where are these civil rights leaders today?

They are those who are too busy with their bigotry race baiting: