In November of 2014, the European Space Agency achieved a milestone in planetary science. They successfully landed a craft of man on the surface of Comet 67P/Churyumov-Gerasimenko. That alone set the world buzzing, as well it might. The landing craft landed nearly in shadow, and had to “hibernate” shortly afterward. But not before sending back a wealth of pictures and other data. In any other context, the scientists involved would have no reservations on their pride. Why then, this time, did those scientists withhold some of their findings for weeks, if not months? Because those findings did something scientists say they appreciate, but don’t. They surprised them. And in surprising them, they vexed them. Because those scientists cannot explain those findings.

The chief findings the scientists have trouble explaining include:

Conventional theories of comet formation all hold that comets formed in space, from materials already in space. The favorite theory is that they formed out of the “solar nebula” and concentrated in a spherical shell, or “cloud,” beyond any presently sighted body in the solar system. Jan Oort first proposed this “cloud” in 1952. And he had never seen anything that could suggest it.

Let us repeat that: Jan Oort never saw anything that could suggest this “cloud of comets” that bears his name. No astronomer has ever seen it. Yet most astronomers insist that’s where comets live, until a passing star kicks one out of the cloud, to fall toward the Sun and make a few spectacular shows before it “dies.”

Problems with those findings 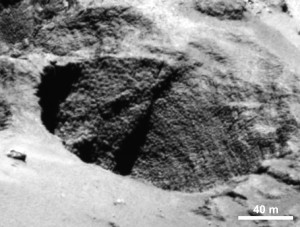 Close-up of a curious surface texture nicknamed ‘goosebumps’. The characteristic scale of all the bumps seen on Comet 67P/Churyumov–Gerasimenko by the OSIRIS narrow-angle camera is approximately 3 m, extending over regions greater than 100 m. They are seen on very steep slopes and on exposed cliff faces, but their formation mechanism is yet to be explained. Credits: ESA/Rosetta/MPS for OSIRIS Team MPS/UPD/LAM/IAA/SSO/INTA/UPM/DASP/IDA

Those same astronomers say comets delivered the water to the oceans of earth. They must have done so 3.8 million years ago by conventional thinking. Because that’s the time paleontologists assume life began.

But how does Comet 67P/Churyumov-Gerasimenko come to have 3.4 times the level of deuterium in the earth’s oceans? What possible neutron storm could have showered the comets, after the first comets fell to earth and dumped their water load, so that the comets still in space could have absorbed enough neutrons to give them 3.4 times the level of deuterium in the earth’s oceans? Remember what deuterium is: the second isotope of hydrogen. A nucleus of it holds one proton and one neutron. Now anything that affected all the comets, should have affected the earth, too. Water is far better able to absorb neutrons than are the gases in the atmosphere. That includes nitrogen and oxygen, that together make up most of the air.

As much as this finding vexed the scientists, the “dinosaur egg” texture vexed them even more. Every astronomer knows, or thinks he knows, about the Aggregation Barrier. Any object larger than about a centimeter across, will fly apart in a collision. So any comet should have an ultra-fine texture. But the astronomers see something radically different. The smallest particles seem to be boulders, not gravel. Rounded boulders, too.

Maybe this explains the odd caption on the ESA site. They show two pictures of Comet 67P/Churyumov-Gerasimenko. Each shows the “goosebumps” or “dinosaur eggs” on the surface. And in captioning each one, they admit: neither they nor anyone else can explain why they see those rounded boulders in those pictures.

Comet 67P, other comets, and a cataclysm on earth

Walter T. Brown can explain both findings. But he understands why most astronomers can’t. “They can never understand the formation of comets,” he said today, “unless they first understand the Global Flood, and the tremendous energies the Flood event released.”

Brown explains those energies here. They totaled as much as 1.8 quadrillion one-megaton hydrogen bombs. Brown explains something else: how the earth’s crust shook, at Richter magnitude ten to twelve. In so doing, it produced tremendous electrical potentials (we measure these in “volts”). Enough to turn heavy-metal atoms into plasma, so they would fuse to form superheavy elements. These then split to form the radioactive elements we know today.

But they also released a neutron storm on earth. At the time the earth had a lot of water to absorb those neutrons. That water lay under the earth’s crust. As the neutron storm raged, that water escaped, as fast as thirty-two miles per second. With that water went many of the neutrons, incorporated into what became heavy hydrogen – deuterium.

Most of the water fell to earth, where the existing surface oceans of earth diluted the deuterium. The water that escaped, formed part of the comets, asteroids, and even Trans-Neptunian Objects we see today. Including Comet 67P/Churyumov-Gerasimenko. Which has 3.4 times as much deuterium as the oceans on earth today.

And the rounded boulders? The same water jet that escaped the earth, carried a lot of rocks with it. Those rocks went through the atmosphere, which then blasted them to smoothness as a sandblaster might have done.

Brown knows about people, both secularists and creation advocates, who make light of him. He got his PhD in mechanical engineering, not physics or astronomy. Fine, he says. Then he says, “Put up or shut up!” He says that as much to his fellow creation advocates as to conventional astronomers. He offers an explanation for Comet 67P/Churyumov-Gerasimenko. If anyone doubts that, he says, let them offer an alternative explanation and defend it, as he does. Which he knows will prove more difficult than one might think. Because the scientists at ESA cannot explain the findings on Comet 67P/Churyumov-Gerasimenko even to one another.

Abiogenesis: not so fast