Hey you Christians, get off your high horse!  Your great (X48) grandparents committed the same sins as today’s Muslims during the Crusades.  So our president told a Christian audience at the National Prayer Breakfast  on February 5, 2015.

Time to set the record straight…Are you listening, Mr. President?

Fact: Islam was born out of, and into war.

To understand this we need to go back to the 7th century when the Quran was written. The Muslim website www.whyislam.org tells us,

It [the Quran] comprises the unaltered and direct words of God, revealed through the Angel Gibrael, [sic] to the final Prophet, Muhammad (pbuh)1 some 1400 years ago.

NOTE: Muhammad was illiterate so he memorized what Gabriel told him. 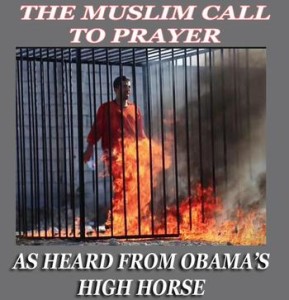 The Arabs of Muhammad’s day didn’t automatically embrace this new faith. In fact they threw him out of Mecca in 622. But like any good militaristic leader he was able to build an army and capture Mecca eight years later making it the center of his new faith.

One hundred years after Mohammed, Muslim armies had waged their holy war across Christian North Africa and even entered Spain. By the 11th Century they were at the door of Constantinople, capital of the Byzantine Empire. That’s when the Byzantine emperor asked Pope Urban II and the Christian Kings of Europe for help.

Fact: The Crusades were in response to centuries of Islamic jihad against Christians.

They were not born out of a desire to pillage, murder and convert Muslims.

Urban II gave the 1st Crusaders two goals: Rescue the Christians of the East and set free the holy lands where Jesus lived and preached.

The Crusades were a defensive war meant to stop Islam’s conquest of Christianity, beginning by liberating the Holy Lands. Were there atrocities committed? Yes, as in any war. But nothing the Crusaders did rose anywhere near the level of horror we see committed by militant Muslims today. Whereas Socialist, Fascist and Communist leaders murdered tens of millions during the 20th century, militant Islam seems intent on raising the bar to a new level of inhumanity in the 21st century.

Mr. (de facto) President, get off your high horse!

So Mr. President, stop rewriting history.  Americans are finally realizing what your rhetoric really means; if YOU tell a lie, then it has to be the truth!

Vaccines: will you comply?