Over 35 years ago Mayor Graves watched over an over again as criminals arrested for violent crimes, such as murder, rape, robbery and other harrowing barbarities were being committed by the same thugs.  He realized, and rightly so, these bad actors were being released early for the crimes they were convicted of and in many cases not even prosecuted for firearms violations which had been plea bargained away or ignored by liberal judges and prosecutors.

He realized so many victims of that continuing savagery, the honest hard working citizens of his city of Paterson may well have been spared if criminals had been kept in jail as they were supposed to be.  Hence, the Graves Act was born.

Originally enacted in 1981, it created mandatory minimum periods of incarceration when certain criminal offenses were committed with a firearm or other weapon. What this meant was that if a thug plead guilty or was otherwise convicted of a Graves Act eligible charge, he would be required to satisfy a period of parole ineligibility before there would be any chance of release from prison. This is what is commonly referred to as a mandatory minimum term of incarceration.

No law abiding citizen in his right mind had any problem with this law.  It was after all Constitutional in that it protected the life, liberty and pursuit of happiness of the good citizens of New Jersey by those whom had been duly adjudicated as infringing on those rights. That was a very good thing.

…and the road to hell 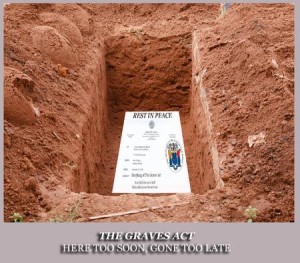 But not any longer. The Graves Act has been hijacked by leftist ideologues who have mutated it from its original intent which was to keep organized criminals and violent recidivists in jail in order to protect the public, into a piece of garbage legislation which now targets, intimidates and imprisons law abiding citizens who have dared to use their Constitutional right of self protection.

It began to go wrong, very wrong, in October of 2008 when the theme of the bill took a decidedly outrageous and unconstitutional change.  Wording in the statement regarding the amendment to the 1981 bill began using different language.  Here is an example. The bill would now, send a message to “unlawful” gun owners and especially those involved in gangs.  Notice if you will, gang members and real criminals are now taking a back seat to the “unlawful” gun owners.  Who might they be? Clearly they will be anyone who has not complied with any of the thousands of lines of NJ gun statues.  Gang bangers are secondary in this statement because now the focus is on otherwise law abiding citizens.

As of this 2008 upgrade,  minimum prison terms now include any breach of the outrageous and unconstitutional gun laws here in NJ.  That is, mandatory and complete prison terms for anyone who may own a handgun and not an ID card.  This change now does not just keep gangsters in prison, it will put your father, your brother, your sister or mother in jail for years as a result of just one violation and a first ever conviction.  Under this 2008 amendment you could find yourself in jail for owning a bb gun your grandfather left for you.  Could anyone really be convinced that street gangs are using bb-guns and rubber band powered projectile ejectors?  Is this change making you safer or is it putting your family unit in danger of collapse?

One of the many disgusting aspects of this new amendment to the Graves Act is that every honest citizen was put in danger of going to prison for years. It was implemented under the cover of continued references to organized crime while subversively targeting daddy and mommy.

Many visitors to this state of Liberty and Prosperity and owners of legal firearms making unexpected stops or the forgotten antique flint lock collector and many, many other law abiding citizens who have been arrested, convicted and incarcerated under  this 2008 Graves Amendment.  Even as court records will show hundreds of actual criminals are still not being sentenced for gun crimes.  It seems the only gun crimes this state is concerned  about are those committed by a single mother trying to protect her children from thugs.

Latest amendment to the Graves Act

There are many more outrageous changes in the 2008 assault on NJ ‘s law abiding citizens.  But the point has been made.  So let’s now move to the latest  attack on  New Jersey citizens, that is the 2013  Amendment to the Graves Act.  The one supported by just about every Republican, in both the Senate and the Assembly as well as our Republican Governor, Christie.

This 2013 legislation is an attack on every citizen’s rights.  It reiterates and reinforces unconstitutional laws which are already on the books and attaches those laws to the Graves Act which creates additional  mandatory prison sentences for first time violations.  Gone is the original intent to have professional and organized criminals incarcerated.

One of the most disturbing aspects of this new amendment is the term “possession”.  No description of just what is meant by possession can be found anywhere in this amendment.  Does it mean carrying on the street, in one’s car or boat?  Does it mean in one’s home or place of business?  That word is used, over and over again in just about every paragraph in this 2013 Amendment.  It seems to be left up to whom?  The police, judges?  On your person, carrying, or in your home, all or any can be described as possession.  Big trouble here in little New Jersey.

Scary times, not just here but across this country, when an honest citizen can be transformed into a felon over night and for the most part, never even know it.  At least until his freedom and his ability to support his family are taken from him as a result of this legislation.  By connecting this amendment to the Graves Act, the honest citizen is afforded no warning, no probation, just prison. All for violations that have been illegally legislated into law.

Is there anything in this addendum that is good?  Not one blessed thing if you compare it to the rights guaranteed to law abiding citizens under the 2nd Amendment and re-enforced by the 14th.   How then did these leftist, Un-American progressives persuade not only our self proclaimed conservative Governor to sign this amalgamation of deceit,  but too, why did every single State Senator and Assembly person who voted, vote yes?  Note: There were a few spineless abstentions or absentees.

Maybe it was that terrific exception to mandatory prison sentences which was grudgingly included  for illegally possessing a bb-gun, a shotgun or rifle if they were discovered to be unloaded by whichever gestapo agency had illegally confiscated them.  By the way no possession of a shotgun, rifle or bb-gun by a law abiding citizen is actually illegal.  Check the Constitution.

The bottom line is this.  The Graves Act was first put into law for the admirable purpose of putting and keeping criminals in prison.  With the help of judges, legislators and District Court Justices it has been bastardized and morphed into a tool of intimidation and circumvention of every citizen’s civil rights and a one way ticket to prison for anyone who fails to understand or comply.  Hijacked by the left and condoned by the right.

The evolution of the Graves Act has done nothing to prevent armed criminals from roaming our streets and invading our homes.  But it has clearly paved a safe passage for them to do just that.

It is long past time for every part of the Graves Act to be planted in it’s own grave.  And a final note to you Republican legislators who have allowed and supported this travesty.  Shame on you, shame on all of you.