The controversy over the free speech issue triggered by the Mohammad cartoon contest recently held at Garland, Texas  – and notable public figures have participated in this controversy – is that the ideas advanced by the participants lack a truth position.

They are intellectually limited by the position of John Stuart Mill’s famous and most influential essay On Liberty. This essay, written in 1859, has been the cornerstone of the American Supreme Court decisions on what has become the First Amendment’s exaltation of freedom of speech.  The Court has effectively held that free speech has a “preferred position” vis-à-vis other values, including public morality and even issues involving national security (qualified by the “clear and present danger” doctrine).

The preferred position doctrine concerning free speech, in America constitutional law, lends itself to absolute or unfettered freedom of expression. This absolutist position is conceptually related to multicultural moral relativism, which may be regarded as a resurrection of the teachings of the Greek sophists, notably Protagoras. So much for some background.

If truth does not exist, all speech must be free 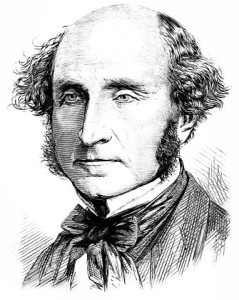 Now, what’s lacking in the free speech controversy triggered by the Garland event – and it’s lacking in Mill’s famous essay – is a TRUTH position. The absence of truth, and its consequent moral relativism, is the malaise of modern liberalism, in contradistinction to the classical Liberalism of America’s Founding Fathers (which I have discussed elsewhere).

The absence of truth logically entails absolute or unfettered freedom of speech. This logically excludes any restraints on public pornography, now a multi-billion dollar industry for which we must thank the American Supreme Court, most notably the late Associate Justice William O. Douglas, an unabashed, not to say vulgar, moral relativist.

I hasten to add, however, that exposing the vicious character Islam is justified if only because Islam is unambiguously a “clear and present danger” to America, and, indeed, to the Judeo-Christian values of Western civilization (leaving Mill’s essay On Liberty a subject for antiquarians).

Nothing of intellectual significance, however, should be expected from the controversy mentioned above, since the issue of truth is foreign to contemporary liberalism, which is as much a sacred cow for liberal democrats as Islam is for Jihadists.☼