“If we are practicing Muslims, we are above the law of the land.” –Mustafa Carroll

Today, we can see in America that the Muslims have become emboldened more and more. How couldn’t they be when we have a treasonous leader (Deuteronomy 28:36) aiding and abetting them both within and without (Article 2, sections 4 of The United States Constitution)?

Not only have we seen this administration defend the Muslims with terrorist ties at every convenient political step, but also appoint them to governmental positions.

One has to ask the question: When a good portion of the country stands back and tolerates the crimes of the Executive Branch, what are the states to do to defend against them (Psalm 11:3)?

I hope you are sitting down for this. Here is the answer. They are to obey their oaths and uphold the Constitution against all enemies both foreign and domestic!

A Texas mayor tells Muslims off

The giant gavel at the Ohio Judicial Center in Columbus

Just like Irving, Texas Mayor Beth Van Duyne, who didn’t think upholding her oath concerning those who are attempting to overthrow the American Constitution was a burden, so those in Washington should follow her example.

We find that the Muslims, who attempted to establish the first Islamic Sharia court inside the United States, received a devastating blow thanks to the Mayor Van Duyne who stood up and refused to be “bullied.” Van Duyne said that she backs the new Texas law, which prohibits any kind of foreign law from being practiced in the state of Texas.

After threats and demands to apologize from the Muslims, who illegally attempted to form the Sharia tribunal along with representatives from the Council on Islamic-American Relations, which is a well-known front for the Muslim Brotherhood, the mayor did not budge one inch.

Aside from the illegal activities that were taking place behind the attempted formation of the Sharia court, it was discovered that all four of the “voluntary” Sharia lawyers were not licensed to practice law in Texas — Friends, that’s a third degree felony.

The Sharia court’s “pretended lawyers” also conveniently failed to inform the city of Irving that they were operating a court inside of the town.

The mayor’s office response to all of this? Follow the Constitution and adopt the American Laws for American Courts Bill, which prohibits foreign law from being practiced in the state of Texas.

The Islamists’ response to American Law was, “We don’t care about the bill. It’s not going to affect us in any way, shape or form. The bottom line is the foundation of this bill is ‘anti-Islamic.’”

During the city vote to support the Texas bill, which passed by a 5-4 vote, members from CAIR were present, attempting to intimidate the crowd by alleging that the bill was “anti-Islamic” and used words like “bigotry” and “Islamophobia.”

It is to be noted that the bill makes no specific reference to Islam or Sharia — it merely states that no foreign law is to be practiced in the state.

What you need to take note of is that the Muslims are using the exact same tactics as the lawless and abominable, sodomite communities (Romans 1:24).

Either the Muslims are attempting to play the victim while they attempt to overthrow the law, or they are using the law against the law to simply overthrow the law. They have the shield with the spear in hand. That is the definition of totalitarianism.

After the decision had been handed down, these Muslims stated that they felt crushed and that their religion was persecuted. They also claimed that they were targeted, which was a further attempt at solidifying “Islamaphobia.” Omar Suleiman said that it was the most disgraceful day as a citizen in Irving. He went on to say that the elephant in the room was that the bill was an anti-Sharia bill.

After 5 seconds, and to their credit, the group of representatives that were doing their job changed nothing. 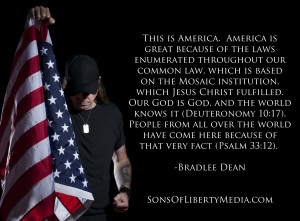 Mayor Van Duyne told the Muslim communities to unite behind U.S. and Texas laws as well as to respect them, obey them and to embrace them.

In reply, the Muslims said this is what furthers the stigma and endangers them and that they would take it to the voter’s box to bring about change.

This is America. America is great because of the laws enumerated throughout our common law, which is based on the Mosaic institution, which Jesus Christ fulfilled. Our God is God, and the world knows it (Deuteronomy 10:17). People from all over the world have come here because of that very fact (Psalm 33:12).

No one is welcome to come into this country to overthrow or desecrate our laws, which hundreds of thousands of men and women have fought, bled and died magnifying. If this is not acceptable to these Muslims, then I will buy them an airline ticket to the Sharia-compliant Muslim country of their choice so that they no longer have to deal with the stigma.