“Patriot Act” and your evil twin “USA Freedom Act”: R.I.H.* where you belong! The Patriot Act was not put into place to protect you; it’s there to intimidate and terrorize you, to keep you in line with what The State demands of you.

Decades ago, in His Infinite Wisdom, The Good Lord taught me something: evil people couch their evildoing in pretty language.

Here in America, Congress gave us “The Patriot Act”, and now, its evil twin, “The USA Freedom Act” – two egregious violations of every law-abiding citizen’s Constitutional Right To Privacy, and to protection from Unlawful Search.

Worse, we who call these dark spades in the nefarious deck of Socialist State cards, dark spades, are attacked, ridiculed, guilt-tripped, and labeled as traitors.

Is this America? Hardly. It’s America, under the grasp of highly placed individuals whose hearts hate us; who pompously masquerade as well-intentioned Americans, as if we still don’t see them for whom they truly are.

With the devil’s wicked humor, this Nazi-esque Surveillance Program of law-abiding Americans is administered by a federal agency purporting to protect us. Contrary to its deceitful ‘Anti-Terrorist Tool’ branding, enemies as defined by The State are the true targets of the “National Security Agency”; personal and/or professional wrong-doing, the evidence it seeks. Words you say, emails you pen, information you develop, files you share, associates with whom you socialize, and acts you commit in your personal and professional life, anything that will prove ‘Nazi-useful’ should The State want something from you – be it silence, a vote, or an act.

For those not yet Enemies Of The State, exploitation of The Fear Factor often proves wickedly effective. What sadistically delicious control value, having people know they’re being chronically, infallibly monitored, with every step they take, every word they utter or type. Adolf Hitler would be envious.

Why, you must ask yourself, why, if someone is a bad guy, why can’t the government go to a judge, show probable cause, and get a warrant to stalk – as has been America’s Constitutional law enforcement procedure for its most of its lifespan?

Officials have acknowledged that their decade-plus system of stalking Americans has done little to prevent acts of terrorism. So why does it exist? Why the huge push to revive it under re-packaged assault on our Constitutionally guaranteed liberties?

Because the true objective of the ‘Patriot Act’ is not to catch bad guys, but to inhibit, terrorize and blackmail good guys.

A little vignette from a day in the life of a lifelong law-abiding United States citizen, who since 2011 has been investigating the actual personal history of the man who presents as “Barack Hussein Obama II”:

Last autumn, I purchased a new computer. Having had several hard drives maliciously attacked, for protection, I decided that this computer would never be connected to the Internet.

No cable connection was entered. No wifi connection, set. No other users, defined. No network established.

Lo and behold, within hours of the computer’s arrival, at Hitler’s Bewitching Hour of 3 a.m., a mysterious ‘Shared User’ manifests, camped out in the Shared User folder; his name, “adi.’ 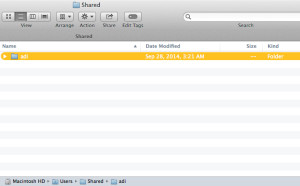 You likely are unfamiliar with whom ‘Adi’ is – as I used to be, before my “Obama” investigative research.

‘Adi’ is a special, private nickname for Adolf Hitler, employed by his nearest and dearest.

Discovering this obnoxious presence on 3 May 2015, I deleted it.

And guess what? Back it appeared, three days later: 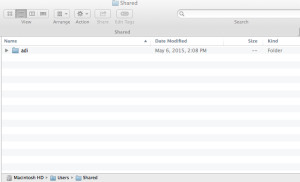 3 days, 3rd Reich. Aren’t they clever?! Hitler’s Invisible Presence; there, but ‘not there’. To ‘remind’ me. Evil eye. Evil ear. Evil heart.

Adi. The uninvited ‘User’ with whom I ‘share’ my always-offline computer. Who, no sooner had my husband brought the computer home, somehow intruded upon it, and since then has ‘occupied’ it, without my computer wifi or cable activated.

When Erik Rush, curious, investigated ‘Adi’, the only information available raised more questions than it answered. Could Apple’s ‘Adi’ be living proof of a clandestine government-corporate alliance, a pathway to enter through the ‘back door’, as revealed by many whistleblowers?

Knowing what we now know about our ‘Protectors’ over at NSA, it’s no mystery Adi appeared, and after I threw him into the trash, and emptied it, reappeared. After all, NSA boasts, it is they who rule; emphatically declared, as in their surveillance initiative “Owning The Net”. If ‘Adi’ is who he may well be, a digital presence honoring Adolf Hitler, Honorary Commander-In-Chief of America’s Digital SS, given the nature of my work, of course he’s here. It always did drive dear Adi mad, to think he didn’t Know All. Historically, Hitler gave new meaning to State Stalking.

Now, seventy short years since The Russians drove Adi from his Berlin Führerbunker, what awesome Political Power Vistas have opened up, via Digital Stalking! Even in his resplendent evil genius, The Führer could not have envisioned them.

Neuordnung, not to worry. ‘Americans’ Very High Up have.

Have we been beaten back enough yet? Have all the officials, elected and appointed, who were not in goose-step with Team “Obama”, had enough?

The Supreme Court shirks its duty

Think back to the Obamacare Strong-Arming in 2009 and 2010. Then, forward a bit to the Supreme Court’s caving on its responsibility to rule Obamacare UNCONSTITUTIONAL. One by one, A.k.a. Obama’s Opposition fell back, politically struck dead by an Invisible Hand. How? Right before our eyes, the wicked Power-Over of the NSA’s unconstitutional Patriot Act played out. Constituents fumed. Pundits spit fire. Why? Did they not see The Unseen? The Monster created by what soon may well be proven the wickedest false flag in American history – the Attacks of September 11, 2001?

Creepy news emerged. The Congressional Cloak Room, bugged. Congressional computers, intruded upon, stalked. As at election time, coast-to-coast, robust deployment of the latest ‘political management tool’: anonymous Digital Death Threats. À la Adolf Hitler, civilian and military assassinations, enforcing the terror. Shall We The People take a survey, starting with 111st Congress, elected in 2008? If you’ve received a death threat, anonymous or otherwise, raise your hand. If harm to your family, property, business, or career in politics has been threatened, raise your hand. How many hands of those opposed to A.k.a. Obama would not pop up?

Last Friday, sporting his crumbling Mask Of Patriotism, in predictable, language-manipulative, strong-arm-con-man style, A.k.a. Obama stated that only “a handful of Senators stand in the way” of extending the Patriot Act. Really? Actually, it’s a handful of [not cowed] Senators – men whose lives do not lend to blackmail – and an entire world of people, including world leaders, enraged at the total obliteration of their privacy.

[Don’t miss “Obama’s” precisely worded, cloaked threat with “stand in the way”; what he really means is “move out of my way, or else -“]

Think Hitler: what would he have done with today’s technology, to control? To terrorize? To coerce? Then, think a.k.a. Obama.

Not to worry, Adi. “Obama’s” got it under control. You, of all people, know: So sind die Amerikaner, dumm kopf!

Yes, Americans have heard; yet somehow, most still don’t ‘get it’.

Will our future play out this way?

Close-up: Digital Soldiers, Enemy Soldiers, their boots-on-the-digital ground, ever on-the-march, stealth-storming your living-room, office, bedroom, car. Watching, as you make dinner. Waiting, for you to ‘trip up’. Listening, as you lay your head on the pillow. Systematically gathering any and all evidence that can and will be used against you, should you be deemed ‘Enemy Of The State’ – i.e., a.k.a. Obama’s National Socialist State.

Pan to: Adi’s Neuordnung, run out of our White House. A credit rolls on a news-ticker: Special thanks to The Patriot Act’s Creation of The Digital SS!

But, as Political Evildoers would have it, it’s not the end of America’s [Global] Digital SS.

For, outrageously, the United States Congress took a very wicked, hateful [now-dead] law, The Patriot Act, and from it cloned its Evil Twin, The U.S.A. Freedom Act. Its very name yet another smack on the jaw of every law-abiding American. Why? Amerikaner, dumm kopf, they snicker, just label it ‘Freedom’ and watch ’em, they’ll fall for it!

After all, they arrogantly assure themselves, we’re the nation’s highest elected officials! Americans trust us.

Historically, perhaps. But not in these perilous days.

What, you may well ask, is on the heart of your Elected Official? Is he or she a fool? A co-conspirator? Or, simply, a weasel, held by the scruff of the neck by The A.k.a. Obama Regime – who likely derived blackmail data, courtesy of The Patriot Act? The answer lies in one of these three options; there are no other.

It’s way past time to make it tough for A.k.a. Obama and his gang to do their dirty deeds. Let’s face it, for far too many years, America’s non-vigilance has made it a cake-walk for political evildoers to destroy the country you cherish. Complaining will not resurrect our Constitutional Protections. Congressional action will.

If your elected officials support The Patriot Act’s Evil Twin “U.S.A. Freedom Act”, demand they carefully explain to you, which of the three above characterizations fits. Be they fool, co-conspirator, or weasel, inform them: this is MY country, this is MY Constitution, these are MY rights – defend them, or get out of my way. Adi or no Adi, America’s roaring back.

Editor’s Note: Forty-seven years ago, ABC television already did show the video, edited to run for two hours with commercials. Matthew Rapf at Screen Gems Productions made it. He and scriptwriter Ned Young named it aptly: Shadow on the Land. See here for a full review, and where you still might be able to get a copy.

And while you’re at it, look for a copy of a film that ran in theaters in 1983, for nearly two hours, without commercials. John Badham made this one. He called it Blue Thunder. Given the militarization of the police, that film might become real even sooner.

Since April 2011, Martha Trowbridge has been conducting investigative research into the actual personal history of the man who presents as “Barack Hussein Obama II”. She is Executive Producer & Host at Martha Trowbridge Radio, LLC: Empathic Wisdom For Suffering Women.

Terry, please remind me of your SH name. PM on that if you like.