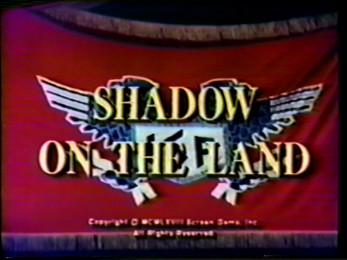 Shadow on the Land was a project perhaps 47 years ahead of its time. That might also be why it failed: no one in the higher echelons of ABC television, or any other network, believed the events in Shadow on the Land could ever happen here. The pilot film ran on one evening, in April of 1968, then again on scattered “Early Show” presentations. But for those few of us who watched it, it taught lessons that are both timely and timeless.

The story is brutally simple. A dictator, having the title of Leader (remember the German word: Führer), has taken over the government of the United States. The people allowed his rise to power out of “fear, greed, and simple laziness.” The Constitution does not matter anymore. (The opening sequence shows a man, wearing a uniform with armbands, painting a black X over it.) At least 12 concentration camps have sprung up across the United States. And the populace cower under the control of the Leader’s dreaded State police, the Internal Security Forces. (Schutzstaffel?)

Their flag is an unspeakable travesty of American symbols, with a stark Nazi flavor thrown in. On a blood-red field, a double-headed eagle grasps two lightning bolts in each talon. Over its breast rests a plain white five-sided shield, with three bold black letters: ISF.

The Leader, though his word is law, is not satisfied. He plans another, far more chilling operation. An Army officer gets wind of it, and tries to alert the underground. The ISF capture him, but the underground manages to free him. Yet the ISF manage to recapture him. But during his interrogation, at least two people of conscience learn of the Leader’s plans and take steps to stop them. Will they succeed?

The characters, both sympathetic and non sympathetic, tell the back story of the Leader and the ISF. Riots spring out in America’s inner cities. (In fact, Shadow on the Land went to air after the murder of Dr. Martin Luther King, Jr., and the riots that followed.) Anyone with any property to guard, naturally gravitates to the Leader and the Force that promise to guard private property, and guard well. Instead, the entire country becomes a police state.

Life imitating art: an all too real ‘Shadow’

Shadow on the Land anticipates the Transportation Security Administration, the stock-market collapse of 2008 (and concerns about a total social collapse still to come), and even the over-militarization of American police forces. Shadow also anticipated events that could provoke the same riots its characters speak of. Seventeen years after Shadow wrapped, the Reagan administration ran the Readiness Exercises of 1984 (Rexx-84), after the Mariel Boatlift. Rexx-84 actually rehearsed martial law and massive civil detention following an overwhelming influx of immigrant refugees. For this, the Army and the Federal Emergency Management Agency, among others, set up holding camps on Army bases and special FEMA properties in every State. Those camps still stand, though they are run down; the federal government never disposes of land it buys or builds upon, even after it stops using the buildings. And today, thousands of undocumented minor children are swarming over the Rio Grande in numbers that dwarf the Mariel Boatlift. This, plus a rumored social collapse, could set up the same conditions Sidney Sheldon projected for his back story.

True enough, neither Sheldon nor head writer Ned Young nor producer Matt Rapf nor director Dick Sarafian thought in terms of a leftist uprising. They thought in terms of a repeat of the takeover of German society by the Nazi Party. That’s why the trappings of the ISF, and its publications (Rules and Regulations, Our Struggle, Handbook for Children, and For Leader and for Country), strongly resemble those of the Nazis.

But one year before Sheldon and company completed their projects, two so-called social scientists, Richard A. Cloward and Frances Fox Piven, proposed a deliberate overload of public charitable institutions and programs. This would cause people to clamor for another kind of Leader, one that would ladle out soup instead of guarding private property.

The relatively unknown actor Marc Strange performs well as the mid-level ISF officer who still remembers when America was free. John Forsythe performs equally well as his cynical superior officer. He believes totally in the Leader and his cause. And he will expend men and resources for a thoroughly bloodthirsty deception of the people.

YOU DEMAND?!? Let me remind YOU, General! The Internal Security Forces SUPERSEDE the Army! AND DON’T YOU FORGET IT! I’ll arrange your resignation so fast you won’t know what hit you. “You demand.”

Jackie Cooper turns in the most difficult performance of all. As the renegade Army officer, he discovers the truth about the Leader’s plans and desperately tries to reach an apathetic people with his dire warning.

The action takes place in what could easily pass for Los Angeles International Airport, an office building that doubles as ISF Western Division Headquarters, a power plant, and a camp that looks convincingly like a concentration camp. Ironic signs abound: mention of the names “United States of America” and “Internal Security Forces” on the same sign never fail to chill the spine even today, forty-six years after this reviewer first watched the program on ABC television. And the music of Sol Kaplan, heavy on brass and percussion, does as much as the performances to keep the viewer/listener tense throughout. (Viewers of Star Trek: The Original Series might remember Sol Kaplan’s most memorable episode score, for “The Doomsday Machine.”)

Today, my fellow editor put together evidence that should chill anyone who reads it. The federal government is militarizing police forces today. But it is also placing key physical assets, specifically light armored vehicles, into small-to-middle-sized cities throughout the country. The local police and sheriff’s forces who get those vehicles, will occasionally use them and constantly keep them up. Then, when either Barack Obama or some other Leader arises and is ready to take over, he can simply commandeer those vehicles by executive order.

Shadow on the Land is not available in any official release. It is available only as a probable bootleg transfer, apparently from one of its few showings on television. But if you can find a copy of this project, you should find it and view it now. While you can still be sure it is only fiction.

Pay special attention to this opening sequence. The voice-over narrator nails it. We do take our democracy “as much for granted as the water we drink.” We might lapse into paralysis “from fear, greed or simple laziness.” Candidates for a Leader abound. (And, nearly two thousand years ago, the most long-lived of the first missionaries, the Apostle John, foretold the rise-to-power of at least two world Leaders.) And let the reader decide whether the current government has any respect left for the Constitution. Will a day finally come when an armband-wearing figure paints the black X over it?

Rock of offense to Hollywood

Shadow on the Land – for real | feedreadnews.com

[…] defense between lawful residents and criminals. (But one project, Shadow on the Land, prophetically warned of a real, formal police state in America. More on that […]

[…] happened next looks, as CNAV has said before, like the back story of a TV project about a dictatorship in America. (Or a movie project about a corrupt government looking for a good […]

[…] to a military dictatorship with Nazi trappings. Screen Gems Productions produced a two-hour pilot, which they titled Shadow on the Land. The premise was brutally […]

[…] fact, this should remind you of a certain 1967 TV project CNAV reviewed last year: Shadow on the Land. The back story on this project reads like […]

[…] who start its use. Still, that language reminds CNAV of a certain dialog from a failed 1967 television series pilot. A senior government security officer speaks of an America “strong and united.” His […]

[…] Gems Productions made it. He and scriptwriter Ned Young named it aptly: Shadow on the Land. See here for a full review, and where you still might be able to get a […]

[…] latter half of the twentieth century saw at least three movies depicting a police state in America. Shadow on the Land (1968) came first. Arguably The Handmaid’s Tale (1990, with Natasha Richardson in the title role, […]

[…] here for a review of an eerily prescient television pilot from 1967, Shadow on the Land. It outlines […]

The militia needs a unified command - Conservative News and Views

[…] Even worse, are false-flag pseudo-operations. That’s what you call it when the government itself stages an operation while pretending to be something else. We saw a hint of this back in 1967, in a TV pilot called Shadow on the Land. […]

[…] – would indict all conservative voters. The House would then confirm it. Thereafter the new Internal Security Forces (in German, Schutzstaffel) wold arrest and imprison all […]

[…] as war correspondents when bully-boy elements of the United States Army – or a real-life Internal Security Force – start rounding people up for imprisonment, or execution, summary or […]