A sure-fire way of assessing the threat that leftists feel toward any challenge to their nonsensical narratives and preposterous policies is to measure the long knives and “important” people they drag out to slam the competition.

Whether it’s the leftwing JournoList cabal of 400 so-called journalists and academics who in 2007 colluded to launch relentless character assassinations against every person who challenged Barack Obama about anything, or the obsessive sexist attacks and slander leveled in 2008 against Republican VP candidate Sarah Palin, or, more dramatically, the strange death of Obama critic Andrew Breitbart, the bleeding-heart left has zero tolerance for opposing opinions and those who express them.

But as we’ve seen in the past few days, Republican establishment heavyweights have their own long knives and “important” spokesmen, which they trotted out in force when billionaire real-estate magnate, philanthropist, and TV personality Donald Trump announced his run for the presidency of the United States of America on June 16, 2015.

On the Fox News 6 p.m. show hosted by Bret Baier, two Republican poobahs weighed in and didn’t even try to camouflage their snobbish condescension. George Will, none too elegantly, called Trump a “bloviating ignoramus,” and told Mediaite that he hoped Trump gets “shellacked,” while Charles Krauthammer, a diehard Marco Rubio fan, asked about Trump, “Look…can you take him seriously?” 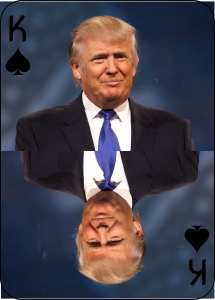 Donald Trump as the King of Spades–or King of Trumps. Adapted from a photo by Gage Skidmore of Trump addressing CPAC 2013. CC BY-SA 2.0 Generic License

Legal scholar and political commentator Mark Levin reminds us that in 1976, the distinctly non-prescient and pompous Will advocated a “cleansing of the GOP of Ronald Reagan and his supporters,” calling those who voted for the 40th president, “kamikaze conservatives.” So much for Will, who Trump put away quite nicely!

And wasn’t it lifelong Democrat Krauthammer who was the chief speech writer for über-leftist Democrat Walter Mondale?

Attention you dinosaurs! While you reserve your positive commentaries for the kind of Republicans-In-Name-Only (RINOs) like weak sisters Boehner, McConnell, Romney, et al, who have failed We the People for decades, the multimillions who welcomed the Trump announcement are looking for jobs and a decisive leader with a proven track record in providing jobs.

What all of these snooty talking heads fail to see––or cannot bear to see––is that Trump has actually created thousands if not hundreds of thousands of jobs, and that his pledge to put America back to work is as credible as credible gets. When I think about Barack Obama’s endless and empty promises to “strengthen the middle class”––which all of his policies have done everything to destroy––and compare him to Trump, it doesn’t take a rocket scientist to know who is the ideological giant and who is the astoundingly ineffectual pipsqueak!

People are looking for a president to close our borders––including building a fence, as Trump as suggested!––to parasitic and disease-ridden illegal immigrants, and the hundreds of thousands of “refugees” whose ties to terrorism are unknown. According to World Net Daily writer Leo Hohmann, since January, over 100,000 Syrians have been sent to more than 70 American cities, in spite of concerns of the Department of Homeland Security and elected officials like Rep Michael McCaul (R-TX), who said that “they present a grave security risk because many Syrians have ties to the Sunni rebel groups ISIS and al-Nusra Front.”

Other sources say that the State Department, working through nine private contractors and 350 subcontractors, resettles U.N.-certified refugees into more than 190 cities and towns across America!

And that’s a drop in the bucket! White House correspondent Neil Munro describes in The Daily Caller a virtual invasion of hundreds of thousands of illegal border crossers,” despite the high unemployment rates among American Latino, African-American and white youths, and the strapped budgets of many cities and towns.” And this, too, is a drop in the bucket!

All the while, critics are ignored by Barack Obama, who clearly encourages this unrestrained and illegal infiltration, and they hear nothing but the tired “racist” mantra of radical groups like La Raza. The reason is simple: according to James Simpson, author of the newly published ­­­­­The Red-Green Axis: Refugees, Immigration and the Agenda to Erase America, “Hatched by the U.N. and the American Left, the resettlement agenda is dedicated to erasing our culture, traditions and laws, and creating a compliant, welfare-dependent multicultural society with no understanding of America’s constitutional framework and no interest in assimilation. The ultimate target is a voting base large enough for the Left’s long-sought `permanent progressive majority.’”

Can you imagine a President Trump abiding this travesty for even five minutes? Me neither.

Support for the military

We the People are also looking for someone who supports our military instead of eviscerating it, and who will conquer – yes, defeat, slaughter, wipe out – our enemies! In his announcement, Mr. Trump expressed outrage at the shabby treatment veterans receive, and he gave full voice to his support for those who defend our country, too often at cost of their lives.

To quote just about everyone from Brooklyn: “You have a problem with that?”

Apparently the Wills and Krauthammers and their Democrat counterparts do have a problem with the kind of straight talk Donald Trump specializes in, they who parse and measure and mince every word to avoid stepping on the oh-so-sensitive toes of the hot-house-flower, career-victim class that has flourished under Barack Obama and the politically correct world he and his cronies inhabit.

One of these sages sneeringly predicted that the Trump brouhaha would last but a 24-hour news cycle, which is another testimony to the general cluelessness of “The Celebrity Apprentice” host’s critics. According to Geoff Earle of the NY Post, Trump is crushing the social media scene, with Facebook reporting that within 24 hours after tossing his hat in the ring, “3.4 million people shared information about Trump 6.4 million times,” making him tops among all Republican contenders.” Trump was also “the most searched GOPer in every state the day of his announcement, and his `search interest’—percentage of national queries for the hour after he announced—was 87 percent.”

This is really no surprise. After seven years of hearing its “leader” badmouth America, watch unemployment numbers escalate from about five percent under President Bush to over 15 percent and 20 percent (of unemployed and under-employed), and witness race relations devolve precipitously, most citizens greeted the latest Gallup poll––which reported that Americans have little confidence in most of their major institutions including Congress, the presidency, the Supreme Court, banks and organized religion––with rueful recognition. Only the military and small businesses inspired confidence.

No wonder Trump’s announcement was greeted with such enthusiasm. At last, America seemed to be saying, someone with optimism, with concrete ideas how to improve things, with contempt for those who tiptoe around saying what they think, and who truly embodies American exceptionalism!

Of course, generally unfunny “comedians” like Jon Stewart are relishing a Trump run because they think laughing at conservatives is good for business. The only problem is that their ratings don’t reflect that fantasy.

Trump is a candidate who has made billions by seeing things clearly, negotiating with clarity and power, and establishing a lengthy and formidable track record in getting things done. Here is a candidate whose beautiful, educated, productive, philanthropic, accomplished, contributory, compassionate and respectful large family –– including former wives –– gives testimony to the character of the man.

Meanwhile, Trump is saying everything Americans have been thinking and feeling for the past seven years. On foreign policy, my friend Cherie, an editor on the West Coast, is confident that when it comes to our enemies, Trump will “give ‘em hell, Harry” like Democrat President Harry Truman and General George Patton gave our enemies in World War II, i.e., defeating them decisively! Cherie also had advice for The Donald about his cabinet:

Then, Cherie suggests, President Trump should immediately announce that he is re-activating all of the many top brass that Barack Obama so foolishly (or malevolently) fired from our military, promoting each one of them and reorganizing our entire command structure, ditto for West Point, Annapolis, and our Air Force Academy!

And while he’s at it, he can right the vindictive wrong that was done to Dr. Terry Lakin, a lieutenant colonel in the U.S. Army, flight surgeon to the 4th Cavalry Regiment, recipient of the Bronze Star Medal, and patriot who had deployed six times prior to his court martial, dismissal from the service, jail time, and loss of his medical license.

I have thought for decades that the massive corporation known as America should be run by a businessman. That is why we also need a president who cherishes, as Trump does, the free-market system, the power of capitalism to “lift all boats,” the foundational values of a democratic republic, a leader who will embrace our allies instead of our genuflecting before our enemies, and who will restore our bedrock relationship with Israel, the only democratic nation in the Middle East.

While I personally believe that Mr. Trump was dead wrong on chastising the heroic Pamela Geller for sponsoring a respectful Draw Mohammed cartoon contest in Texas – for which she became the target of Islamic assassins ––I suspect that candidate Trump, himself a target of the anti-free-speech Nazis on the left, will reverse himself in defending not only his own right to speak his mind, but every American’s right to do the same, including Pamela Geller’s! Today, the alternative, as Geller spells out in detail in her books––here, here, and here–– is Sharia Law in America, complete with mandatory clitoridectomies, death to gays, and “honor” killings, among other lovely tenets of the “religion of peace.”

As for me, I have to admit I’m enjoying immensely the degree to which candidate Trump is driving both the impoverished left and the namby-pamby right clinically insane!

Sarah Palin for president
Business mogul Donald Trump for her VP running mate
Texas Senator Ted Cruz for Attorney General
Dr. Ben Carson for Surgeon General
Utah Congresswoman Mia Love for the Department of Homeland Security
Governor Scott Walker either for the Department of Commerce or to figure out which departments to cut altogether, like the IRS!
Jeb Bush as head of FEMA
Alan West as US Inspector General with seniority over all other inspector generals.