The Palestinian Authority (PA), is the 1993 successor of the Palestine Liberation Organization (PLO). Far from being the “peace partner” of Prime Minister Benjamin Netanyahu, the PA is in fact a consortium of Muslim-Arab terrorist organizations. The written constitution of the PA commits Muslims to the annihilation of Israel. Apparently, U.S. Secretary of State John Kerry and his boss President Barack Obama have not perused that Muslim document, which echoes Hitler’s racist and genocidal Mein Kampf.

If they have read it, perhaps they are discomfited by the fact that America has bankrolled the PA to the tune of more than a billion dollars, the highest per capita aid to any recipient of American largesse.

In any event, the goal of the PLO-PA is known throughout anti-Semitic Europe. It is also known to the Vatican; hence it is no secret to the well-informed leaders of the Roman Catholic Church.

Also, it is no secret that, the PLO-PA has murdered some 1,000 Jewish men, women, and children, and that it maimed at least 15,000 other Jews since the Oslo or Israel-PLO Agreement of September 1993.

Despite these well-known facts about the Palestinian Authority, earlier this year Pope Francis supported the PA’s demand for Palestinian statehood. By so doing, the Pope dignified the PA and thereby encouraged its Jew-killing activity, which constitutes a violation of the United Nations Charter and the Universal Declaration of Human Rights.

Moreover, by supporting Palestinian statehood, the Vatican encourages the United States and other nations to continue their policy of bankrolling the PA. The U.S. alone gifts the PA with annual grants of more than 100 million dollars. Since this money constitutes the income of the Palestinians, it encourages and enables them to continue murdering Jews lest they lose their well-paid jobs! Indeed, the current wave of Muslim terrorism in Jerusalem would hardly be possible if these terrorists lacked the income the PA receives from democratic America and democratic Europe – nations noted for their belief in the sanctity of human life.

Justice has caught up with Europe. It is drowning in a tsunami of Muslim migrants from the other side of the Mediterranean–Muslims bearing syphilis and other pathologies. This disaster bears a punitive connection with the fact that Europe, the home of Christianity and humanism, has been drenched repeatedly in rivers of blood – especially Jewish. But why is Christianity part of this ugly tragedy of human history? 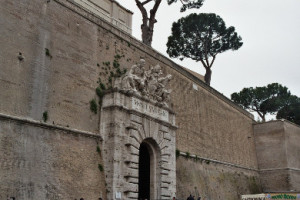 In attempting to answer this tremendously complex and provocative question, I shall ignore the vast literature on anti-Semitism. Rather than discuss this pathological hatred of Jews and Judaism, which some Christian theologians have recently traced to the New Testament,* it will be more pertinent to consider the contention of Catholic Christianity that the destruction of Jews and of Jewish communities was a divinely ordained punishment for their refusal to recognize Jesus as the Messiah.

(Viewed in this light, one can say more convincingly that the present collapse of Christian Europe is a divinely ordained punishment for its participation and complicity in the Nazi Holocaust. But let us focus on the Christian belief that the punishment of the Jews was the ordained by their denial of Jesus as the messiah.)

Underlying that contention is a monumental yet virtually unknown error (elucidated in my book, Beyond the Secular Mind). I have in view the Christian interpretation of divine reward and punishment, which is based on a fundamental and tragic misconception.

On the one hand, Christian theology acknowledges Leviticus 19:2, “You shall be holy, for I the Lord your God am holy,” as well as Deuteronomy 28:9,  “And you shall walk in His ways” (imitatio Dei).

Nevertheless, Christianity fails to bring into correct juxtaposition with those verses Isaiah 55:5, that “My ways are not your ways.” Here Christian theology confuses God’s general ways, which men can know and imitate because they are prescribed in Scripture, and God’s particular ways, which are not knowable.  Thus: “The hidden matters belong to the Lord our God, but those things which are revealed belong to us and to our children for ever, that we may do all the words in this Torah” (Deut. 29:28).

Why a righteous person is sometimes allowed to suffer, and why a wicked individual is sometimes allowed to prosper, involve particular laws known only to God.  Of course, if the wicked were always punished here and now, and the righteous were always rewarded here and now, there would be neither wickedness nor righteousness, for man would be without free will. Human ignorance of God’s particular laws of reward and punishment is a precondition of free will, hence of man’s humanity.

God’s ways often seem cruel from a human perspective – think of Job.  And of this: “When it rains, weeds also flourish, and with drought lilies also wilt.”

Our knowledge is exceedingly limited, especially of what lies in store for us in the future.  So far as behavior is concerned, we are given to know a finite set of positive and negative laws, infractions of which are dealt with in judicial courts. There judges apply the law to the questioned act or actions of specific individuals. They do not and cannot inquire into and evaluate the infinite train of causes and consequences of any human act.  Only an Infinite Intelligence can do that. (God is our only true judge.)

Put another way: Only the Supreme Judge of the world can weigh the exact harmfulness or, conversely, the salutary character, of an individual’s deed, and can thus judge him not only in relation to all of his other deeds, good and bad, but in relation to all other individuals who may have been directly or indirectly responsible for his conduct.  The particular laws or standards governing this infinite computation of reward and punishment, in which individuals and even nations are judged, are humanly unknowable.

(Recall the “Song of Hannah,” who understood that “The Lord is a God of Knowledge, and by Him actions are weighed” (I Sam. 2:3).

Why Judaism does not make this error

Now, down through history Christianity (but also Islam) has committed the fatal error of presuming knowledge of the particular laws of divine reward and punishment.  Without God’s infinite knowledge, it has imitated God’s particular ways which, from a human perspective, are often cruel, and it has applied these ways not only to individuals but to entire communities. It is in this light that we are to understand the negative side of religion, so cruelly manifested in the Inquisition (when, to save errant souls, Christians  dispatched them to heaven).

All this is utterly foreign to Judaism (which actually is not a religion, so much as a comprehensive truth system susceptible to rational investigation and verification like any science). Jewish jurisprudence knows only of God’s general ways, for these are set down in the Torah, which is not in heaven but here on earth for all to see and learn (Deut. 30:12).  Lacking omniscience, the Jewish judge leaves the saving as well as the damning of souls to the infinite judgment of God.

The doctrine of papal infallibility is also foreign to Judaism, since only publicly attested scholarship can lay claim to the validity of any judicial decision.  Nor is this all.

Maimonides mentions three ways by which Gentiles have tried to destroy the Torah, hence Israel. The first way is by war (the Persians); the second by philosophy (the Greeks); the third by creating another religion ostensibly based on the Torah but superseding it (the New Testament).

Today, gentiles are employing a fourth way to destroy the Torah, i.e., Israel, and that is by supporting the establishment of a Palestinian state. And so, Pope Francis, a prince of Peace, came to Jerusalem and embraced Yasser Arafat’s successor, Palestinian President Mahmoud Abbas, a prince of War.☼

* See the collection of essays in Alan Davies, Anti-Semitism and the Foundations of the New Testament (New York: Paulist Press, 1979).

Editor’s note: The author here describes not only classical Roman Catholic doctrine but a particular subset of it: replacement theology. Replacement theology makes another error. It misreads the name Israel in, for example, the Pauline Epistles, as standing for the church. Replacement theology, sadly, pervades some of the best-known Christian works, including The Annals of the World by James Ussher. (That work ends with the sack of Jerusalem in A.D. 70 and calls this “the end of the Jewish confederation.” Many Popes made the same error, perhaps when they found that error convenient. Urban IX and Alexander VI come to mind.

These errors would have amazed Paul of Tarsus as surely as the Galatian heresy did (see Galatians 1:6-7). In Romans chh. 9-11 Paul treats the relationship of national Israel to God on one hand and Gentile believers on the other. Paul specifically warns his Gentile readers not to make the error of holding themselves closer to God than the Jews. Tragically the Roman Catholic Church ignored Paul’s words. – TAH

Fear of God or man