“It’s easier to fool people than to convince them that they have been fooled.” –Mark Twain

While the presidential race is well under way and all of the candidates are promising what they will do when, and if, they become the President of the United States, not one of them has stated that they will right all the wrongs concerning the past and present administrations.

Actions do not line up with words

Yet, if you look and listen closely (Jeremiah 5:21-23) to what these candidates say and contrast what they do, you will see that things just do not line up. Instead, they simply stand in direct contradiction (Matthew 23:3).

There is not one of the candidates, not one, who has drawn up Articles of Impeachment (Article 2, Sections 4 of The United States Constitution; Jeremiah 5:1). Nor have any of them stated they would seek to prosecute the current occupant of the White House for his treason and crimes. Not one! Yet, they would have you believe that they are going to right the wrongs when they become the president, but not in their current position?

They have the opportunity even now to do so, but every single representative in this country up to this point has failed to do so! They are derelict of duty and that before God and man (1 John 5:2).

It is absolutely astounding to me that if the average American were to stand in front of an apple tree and were then told by these politicians (diplomatic magicians) that it were an orange tree, they would be sure to fall in line and agree with them. This is exactly what is happening when we listen to their words, but their actions reflect the actual fruit seen hanging on their tree.

For a good tree bringeth not forth corrupt fruit; neither doth a corrupt tree bring forth good fruit. For every tree is known by his own fruit. For of thorns men do not gather figs, nor of a bramble bush gather they grapes.”-Luke 6:43

The corrupt tree is directly in front of the American people’s faces (James 2:14-26).

They that observe lying vanities forsake their own mercy. – Jonah 2:8

The people should know better

This is coming from the country that should know better. The American people, as well as their representatives, refuse to call the obvious for what it is. Then they fail to understand why this country is in the condition that it is. The reason is that if they do not stand against it, it is because they are guilty of it.

If you are looking for a politician to be the savior of America, you are looking in the wrong direction. How is it that America forsakes its own mercies? Instead of going to the Word of God (“No King but King Jesus”), which commands judgment in the act of lawlessness (Leviticus 26:15), Americans look to their favorite politician to stand up and fight for what they are unwilling to fight for, even when they know that the politician is corrupt. And over and over again Americans gain a slow digression into the next level of debased immorality. 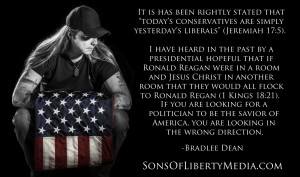 It has been rightly stated that “today’s conservatives are simply yesterday’s liberals” (Jeremiah 17:5). America, Think! (Exodus 20) I have heard in the past by a presidential hopeful that if Ronald Reagan were in a room and Jesus Christ in another room that they would all flock to Ronald Reagan (1 Kings 18:21).

It is time for Americans to tear down the sacred cow of “Let them do it for us.” In case people have forgotten what it means to be a patriot, remember what the things we were reminded of by our past presidents.

The Bible is the ROCK upon which our Republic rests. – President Andrew Jackson

There is nothing stable but Heaven and the Constitution. –President James Buchanan

When it comes to the things that have been going on in this country since the 1960s, it really is not that complicated. Americans have not been fooled, they have denied the obvious through their inaction (passing it on for someone else to do). They have wickedly departed from their God (2 Samuel 22:22) and have willfully neglected everything that has been right there in front of their faces, good or bad. Let us hear the conclusion of the whole matter: Fear God, and keep His commandments: For this is the whole duty of man (Ecclesiastes 12:13-14).