“Americans can only allow the can to be kicked down the road for so long before it ends up going over the cliff.” Amos 5:7

Day after day, week after week, month after month and year after year, Americans receive the same depressing and oppressing news from media resources nationwide concerning the corruption in their government.

No one can say that we need to be patient before dealing with the issues at hand, knowing that patience is the weapon that forces deception to reveal itself (1 Corinthians 4:5). The deception has been revealed and America needs to deal with the crooks. But….

How the corrupt tree is nourished

The same old message is given over and over again (Isaiah 59). 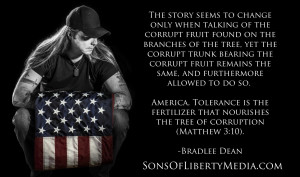 America, tolerance is the fertilizer that nourishes the tree of corruption.

Instead of laying the “ax to the root of the tree” (Matthew 3:10), the media praises this wicked administration by magnifying and glorifying its high crimes toward the American people (Proverbs 28:4).

In the election cycle of 2012, when Americans were cheering on their most favorite establishment, media propped up and appointed representative option, Mitt Romney (architect of Obamacare, advocate of homosexual “marriage,” pro-abortion and anti-gun candidate – Look at his actions, Matthew 7:16), to lead America further down the road through the lawless one and his methodologies (2 Thessalonians 2:3-12), which leads to immorality and, at length, self-destruction (Romans 6:23).

Americans, instead of protesting the corrupt establishment, corrupt media, and corrupt “representatives,” simply stand down, give it a pass, only to be deceived on another day (Luke 21:8). Then they complain about what it is that they tolerate. Sorry to say, it seems that the Americans would “have it so” (Jeremiah 5:31; 8:15).

Furthermore, they are going to wish for the clock to be turned back in order to right the wrongs because they failed to do so when given the opportunity (Psalm 50:22).

Those who will not learn from history…

Speaking of turning the clock back, what good is history if history is not to be learned from?

Let me give you a few examples as to what history has taught a people that will not listen to the teachings of history.

Germany, during the reign of Adolph Hitler, was a Weimar Republic, a nation to be ruled by law under God. However, the Germans forgot God and His Law, like other countries that wickedly depart from God only to see history repeat itself (Psalm 18:21), and gave their allegiance to a dictator, which less than 3% of the population gave approval. While 97% of the people laughed at Adolph Hitler, the joke was on them (Ecclesiastes 1:9).

While the people in Germany were playing games with the politicians concerning their laws and freedoms, hoping for someone else to do for them what they were unwilling to do for themselves, Hitler and his small regime were hard at work killing off political opposition and overthrowing every facet of the German government which stood in their way. Yet, the people accepted his crimes and his delusional government, which was premised on nothing but lies!

Americans, like the Germans, are doing the same things, and if anyone should know better, it should be the American people (Luke 12:48). To whom much is given, much is required. And be assured America, much is required of you!

Politicians brought the Nazis to power and started the war. They are the ones who brought about these disgusting crimes.

When warned of Hitler and his crimes against the people with the use of the brown shirts, the SS, fatherland security etc., it was the “good people” that turned a deaf ear to the truth (John 14:6) to expose the lies that were being perpetuated against them by being led to believe that it was only a “Conspiracy theory.” This all came from Hitler’s media propagandist Joseph Goebbels, who was, in fact, brow beating dissenters (2 Timothy 4:3; Jeremiah 11:8-9).

The more we do to you, the less you seem to believe we are doing it.

However, it is the command of God that the Church reprove darkness (Ephesians 5:11; Mark 8:15).

Today’s Church in America, paralleled to that of the German Church under Hitler, is a part of the problem (Isaiah 30).

This quotation stemmed from Martin Niemöller’s lectures during the early postwar period. He believed that Germans, and in particular the leaders of the Protestant churches, had been complicit through their silence in the Nazi imprisonment, persecution, and murder of innocent people.

Martin Niemöller was one of the earliest Germans to talk publicly about the broader complicity in his 1946 book Of Guilt and Hope. Niemöller wrote:

Thus, whenever I chance to meet a Jew known to me before, then, as a Christian, I cannot but tell him: “Dear Friend, I stand in front of you, but we cannot get together, for there is guilt between us. I have sinned and my people has sinned against thy people and against thyself.”

The sad fact of the matter is that America has now put herself in a position where pain and loss will be her teacher! Americans, who have been warned time and time again, have refused to take the Lord’s reproofs, and have failed to understand that prevention is better than cure. Therefore, she will reap the fruit of her own ways (Proverbs 1:22-31).

Thine own wickedness shall correct thee, and thy backslidings shall reprove thee: know therefore and see that it is an evil thing and bitter, that thou hast forsaken the LORD thy God, and that my fear is not in thee, saith the Lord GOD of hosts.