Let’s take a putative trip through the marvelous world of the moderate.  These are the people whom receive accolades of distinction and value relating to fairness, empathy and compassion.  This characteristic, we have been told incessantly, is the thing in contemporary America that should most be admired and emulated.  Hence, a moderate should never be challenged or upset with aggressive agenda or principled beliefs.

The moderate has been described as an independent thinker, incapable of making any but good and honorable decisions. And always sans vitriol and unnecessary confrontation.  He is one of patient temperance from which derives peace and goodwill for all.

From the moderate there has spawned an arsenal that is more dangerous to our country, our sovereignty and our culture than any known military weapon.  It has created a cancer which has metastasized into an impenetrable barrier which thwarts discussion, thought and evaluation of those things which are now slashing at the guts and the heart of America.  It has done what no foreign invader could.

That weapon my friends is (PC) political correctness.

The moderate, a being of mindless direction, unmotivated by hard work or the need to do the required things in defense of liberty and freedom, dwells in a rose garden world of political correctness while espousing a utopian existence which exists only in the imaginary world of university faculty lounges and in the minds of progressive dreamers.  He is blessedly ignorant of the sacrifices that have taken place or the ones that need to be borne.  Sacrifices which have provided for him, a fanciful kingdom of politeness and non-confrontation.

In the real world, the actual place where humanity exists, hungry and insatiable monsters will devour the apathetic moderate who has chosen political correctness and subdued rhetoric as a defense.  Moderates have been and always will be dominated and controlled by those who espouse strong positions.

What is a moderate?

First, a few things he is not:

Next, a few things he is:

Lessons from the wild

It is not just human nature but the nature of all living things which always produces a small group of individuals who dominate, lead and control the rest.

For instance in the world of the wolves, lions and hyenas, there is a constant and ongoing struggle to be the Alpha.  Very few individuals take part in that struggle as most sit back and prepare to be followers and servants of the victor.

If an experimental environment of let’s say 1,000 people could be created and isolated, how many of those people would need to be moderate to ensure a moderate society develops and persists?  A fairly educated guess would be, all one thousand of them.  And even then, they would each need to be equally moderate.

In the same experiment how many people with aggressive and accretive tendencies would it take for them to dominate the rest.  Most likely the answer is one, maybe two.  As the moderates settle into their apathetic non-aggressive modes of moderation and political correctness, the Alphas will be making and enforcing the rules. 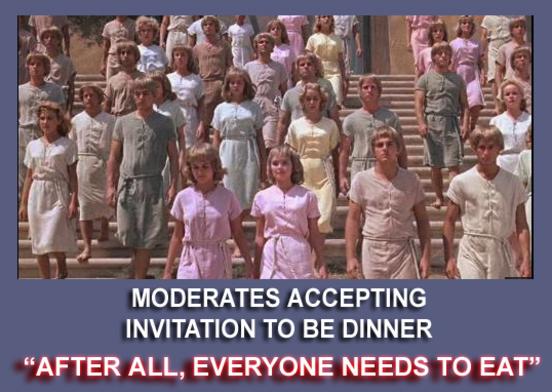 In a perfect illustration of moderates, a crowd of docile, cattle-like Eloi placidly obey the literal siren song of the Morlocks–who themselves are cannibals. Source: The Time Machine, produced and directed by George Pal; screenplay by David Duncan based on the novel by H. G. Wells; with Rod Taylor, Yvette Mimieux, Alan Young, et al.; dist. by Warner Bros. Pictures, 1960.

Imagine now that there existed other isolated environments and those who have become dominate have discovered them and figured out a way to invade them.  Will the moderates be allowed to sit back and be left alone or will they be come the fodder of the leaders? They will do as they are instructed. After all, that’s what moderates do.

So now, equate this simple formula to let’s just pick a number, say 680,000.  And let’s imagine that is the number of Muslims that Barack Islam Obama has brought in to America over the past several years.  How many of those do you think are moderate?  How many are radical?  How long will it take the radicals to enlist a majority of the moderates into their army of murder and terrorism?  How many of the moderates will stand up to the Alphas?

In the end my fellow patriots, if it comes to pass where you are engaged in a fight with invading killers in your home, remember it was that moderates who have presented the vermin with access to you and your family.

Moderation and political correctness are not the benign entity they might appear to be.  But in fact they are a cancerous growth eating away at the soul of our country. And it won’t be just the moderates who suffer. They will take the rest of us with them.  If Americans fail to see it for what it is, this evil will devour us all.