Israel was accused of using disproportional force in response to Iran’s proxy Hezbollah in the Second Lebanese War.   It may therefore be of interest to consider again the Allied firebombing of Dresden in February 1945.

A historical example of disproportional force? You decide

The following is an extract of a relevant article in Wikipedia: 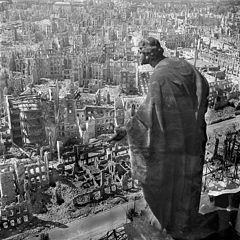 Dresden after the “disproportional” bombing. Photo by Richard Peter, 1945. From the German Photography Library.

During the evening of February 13, 796 Avro Lancasters and 9 De Havilland Mosquitoes … dropped 1,478 tons of high explosive and 1,182 tons of incendiary bombs by the early hours of February 14.  A few hours later, 529 Lancasters dropped more than 1,800 tons of bombs.

Later on February 14, American B-17s dropped 771 tons of bombs on Dresden … “Part of the American Mustang-fighter escort was ordered to strafe traffic on the roads around Dresden to increase the chaos”.[14] The Americans continued the bombing on February 15 dropping 466 tons of bombs. During these four raids a total of around 3,900 tons of bombs were dropped.

The firebombing consisted, of the by-then standard methods,[18][19] of dropping large amounts of high-explosive to blow off the roofs to expose the timbers within buildings, followed by incendiary devices (fire-sticks) to ignite them and then more high-explosives to hamper the efforts of the fire services. The consequences of these standard methods were particularly effective in Dresden: the bombings eventually created a self-sustaining firestorm with temperatures peaking at over 1500°C (2700°F). After a wide area caught fire, the air above the bombed area became extremely hot and rose rapidly. Cold air then rushed in at ground level from outside, and people were sucked into the fire.

The precise number of dead is difficult to ascertain and is not known. Estimates are made difficult by the fact that the city and surrounding suburbs which had a population of 642,000 in 1939[24] was crowded at that time with up to 200,000 refugees,[25] and some thousands of wounded soldiers. The fate of some of the refugees is not known as they may have been killed and incinerated beyond recognition in the fire-storm, or they may have left Dresden for other places without informing the authorities. Earlier reputable estimates varied from 25,000 to more than 60,000, but historians now view around 25,000–35,000 as the likely range.[26][27]

Question: What might sheltered academics steeped in moral equivalence say about this when they pontificate about Israel vis-a-is its Muslim enemies?

I like General Powell’s doctrine of war….it’s never supposed to be an even fight, if it is, we did something wrong….if you go in, go with everything and win, have a strategy, get in, get out!!