If not every day, certainly most days, some place in the world or many places, a Muslim or a group of Muslims slaughter one or more people, for no other reason except that they believe their god, this allah, will reward them in paradise.  Some people have come to the delusional conclusion that these slayers of the infidel do these things because they are mentally ill, psychos created by inbreeding and singular blood lines.  While that may assist the cultish indoctrination, it is not the cause of this evil.

Ignoring the causes of evil

Those who consider “lone wolf insanity” to be the cause of such evil as we see, suffer from foggy compassion and are dangerously misguided souls.  They have been so consumed by political correctness and the desire to be morally superior to those intolerant demagogues who are sounding the alarm relating to this Islamic“religion of peace”, so much so that their eyes will remain closed to the coming horror until they are closed forever at the hands of a terrorist.   Equally culpable as those wielding the machetes or firing weapons into the bodies of their helpless victims, these gullible fools stand in the way of those who comprehend that the murdering of innocent men, women and children is not simply condoned by the Koran, but explicitly demanded by it. 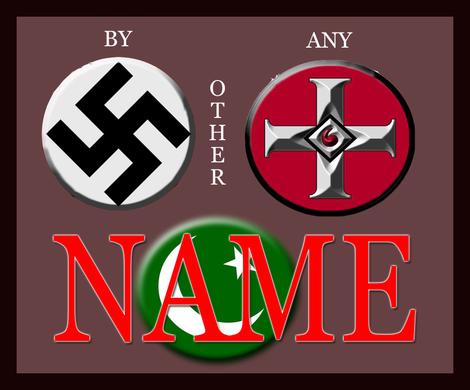 Not just traitors are they to their respective countries, but also to their own towns and their own public gatherings and even to their very own families.  Despite all that has transpired, all the death, all the agony, and all the inhuman torture Islam has wrought upon innocents, these collaborators have and continue to aid the opening of hell’s gate and invite the vermin behind it, into their homes and yours.

To put into perspective how unbalanced and so completely insane it has been, let’s consider another group which was identified, tagged, labeled and then for the most part vilified and disbanded and leaders and members incarcerated.

The Ku Klux Klan, better known as the KKK, was in operation for several decades beginning just prior to the end of the Civil War.   The murderous activity of this vile and racist group of scoundrels, early on, was condoned and ignored by a large part of society.

This band of villains was inspired by the desire to keep the Caucasian blood lines and their European culture pure of the African influence.  It took some time and for sure remnants of that evil ideology still simmer like rancid cesspools, not just in this country but around the world.  But for the most part, God loving people came to their senses as these darkest days of American history came to a close.

Where is this going?

This may seem a bit off the track here, but stick with this for a bit.

Is there any real difference between inheriting DNA, skin color, eye color, ethnicity or religion?  Statistics show that well over 99% of people born to a particular religion, even if not active in it, remain in that religion for life.  It’s true there are people born to atheist couples who find religion and also vise-versa.

The point here then is that no person really choses his religion, almost to the extent that he has no choice on what skin color he will carry with him through life.

Suppose now that there was to arrive on the scene an organization, we shall call Group A, made up of people who decided that those born into a godless home or into a home that worshiped a different conceptual god than did they, were undesirables.  And a percentage of their members began to systematically eliminate non Group A members.

Or imagine if there arose yet another association, we will call Group B, made up of people who were concerned that the freedoms they were given by their parents were not going to be available to their children, and as a result a few individuals went out and hurt or killed someone they believed was responsible.

The answer is, almost immediately.

Now consider Group A; if the same scenario took place such as in Group B, but in far greater numbers and devastation, how long would it take for civilized societies of the world to band together, call that group what it is and then do everything in their power to protect their citizens from such malevolent evil?