“The strength of the Constitution lies entirely in the determination of each citizen to defend it. Only if every single citizen feels duty bound to do his share in this defense are the constitutional rights secure.” ― Albert Einstein

The danger in the appointment…

Last week, America lost Judge Antonin Scalia from our highest court and people are afraid of who might take his place. Americans should be afraid if they are going to roll continuously over and play dead to judicial tyranny the way that they have over the last 100 years. Some are saying:

The next appointee to the Supreme Court justice may vote liberal.

America, there is no liberal side of the law! There is mercy to the repentant (Isaiah 66:2). Outside of that, the Law merely condemns crime; it is not turned to justify crime. Furthermore, we only have one Constitution!

Some are saying this is the death of conservatives! 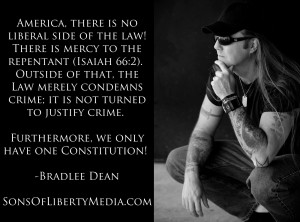 if the people are willing to fight!

The strength of the Constitution, lies in the will of the people to defend it.

People are also worried that the next vote on Americans’ right to keep and bear arms, which is protected under the Second Amendment, may be infringed (violated).

The Supreme Court is not above the law. The only way their lawlessness abounds is if the people will let them do so. They do not have any authority whatsoever to act outside of the enumerated powers of the Constitution, Period.

They swore before God and man, with their hands upon the Bible, to uphold the Constitution “against all enemies both foreign and domestic,” not to tear it down.

Judges are not above the Laws of our Constitutional Republic (Article 4 Section 4 of The United States Constitution). They cannot decide against written Constitutional Law. If they are allowed to get away with such things, it shows you who is corrupt (Romans 7:12), and that their rulings are not law (Deuteronomy 5:1-22).

The answer to America’s judicial tyranny is to deal with the judges! Judges are appointed to serve during good behavior (It is not good behavior to transgress moral law), and need to be removed for bad behavior (Article 3, Section 1; Article 1, Section 3; Article 2 Section 4 The United States Constitution; Psalm 2).

Judges are appointed to discover and apply the Law, not to re-write or to re-interpret what is easily understood by every American adult and child.

Yet, this is what the American people have been conditioned to accept (Hosea 4:6). Somehow, people in this country have been led to believe the courts are the law (demi-god), and that whatever they say goes. False!

The Court assails the Church (the giver of the Law, Exodus 18:21) and upright and righteous Laws through oligarchy after oligarchy (few rule over many), advocating that which God condemns. The list goes on and on and on and on. Which, of course, turns the lawful into the enemies of the state. This is exactly what they are attempting to do.

Again, these that represent the people are there to uphold the law, not to tear it down and re-create it in their own ungodly image.

Speaking of the ungodly and un-American Injustices, look what these individuals have been allowed to do with this country. Look at their records (Matthew 7:16).

These are not judges. These are activists legislating away, and gutting the pith and marrow out of America’s God-given RIGHTS.

They have sanctioned sodomites to “marry” one another while shutting down the American people that they work for (Leviticus 18:22; 20:13; Romans 1:24).

They have assailed free speech, the right to bear arms, etc.

A nation of well-informed men who have been taught to know and prize the rights which God has given them cannot be enslaved. It is in the religion of ignorance that tyranny begins. (Benjamin Franklin)

Why is it, knowing the law, that 318 million people are afraid of what effeminate Barack Hussein Obama will do next to transgress further the Constitution by attempting to appoint another corrupt judge to the bench?

America, it is for you to now send the message, “Don’t tread on me!”