“And if a house be divided against itself, that house cannot stand.” Mark 3:25

The Republican Party, along with the help from FOX News, who just happens to be a financial supporter of the Clinton’s Foundation, continually disrupt support for candidates that are leading with support from the American people. In their latest attempt to help usher in Hillary Clinton, they sent forth their unqualified, two-time loser Mitt Romney to hypocritically attack Donald Trump. That was proceeded by anti-American Obama minion Paul Ryan giving Barack Obama everything that he wanted and more when he helped push through an omnibus bill that places $2 trillion deficit on the backs of The American people.

And, of course, don’t forget that Mitch McConnell’s father-in-law being busted for cocaine onboard one of his ships only helps things further things along.

For those that did not know, it was Mitt Romney and his top advisor Jonathan Gruber who were the ones responsible for the unconstitutional RomneyCare, which you know now to be the blueprint for ObamaCare (Article 1, Section 8 of the United States Constitution).

MIT professor Jonathan Gruber, who advised both Romney and President Obama on their health care reform plans, told The Washington Post’s Jennifer Rubin that without Romney’s plan, and more specifically, that plan’s individual mandate, President Obama never could have gotten his plan through Congress:

He says that as the federal health care plan emerged, the Massachusetts plan was “widely discussed.” […]

The Democrats get involved

While the attempt to further divide and conquer continues by adding more confusion (Daniel 9:8), Harry Reid from has now demanded that Paul Ryan denounce his support for Trump, who is said to be in support of the KKK because David Duke supports Trump. How does that work?

Confused yet? You should be! It is all by design.

America, it is the Democratic Party that is responsible for the creation of the KKK!

Furthermore, America, we have one Constitution, not two! We are ruled by Law, not party.

There is nothing which I dread so much as a division of the republic into two great parties, each arranged under its leader, and concerting measures in opposition to each other. This, in my humble apprehension, is to be dreaded as the greatest political evil under our Constitution. –President John Adams

Why are the American people confused?

President James Garfield quickly brought this to resolve when he said,

Now more than ever before, the people are responsible for the character of their Congress. If that body be ignorant, reckless, and corrupt, it is because the people tolerate ignorance, recklessness and corruption.

Why not pursue Hillary Clinton? 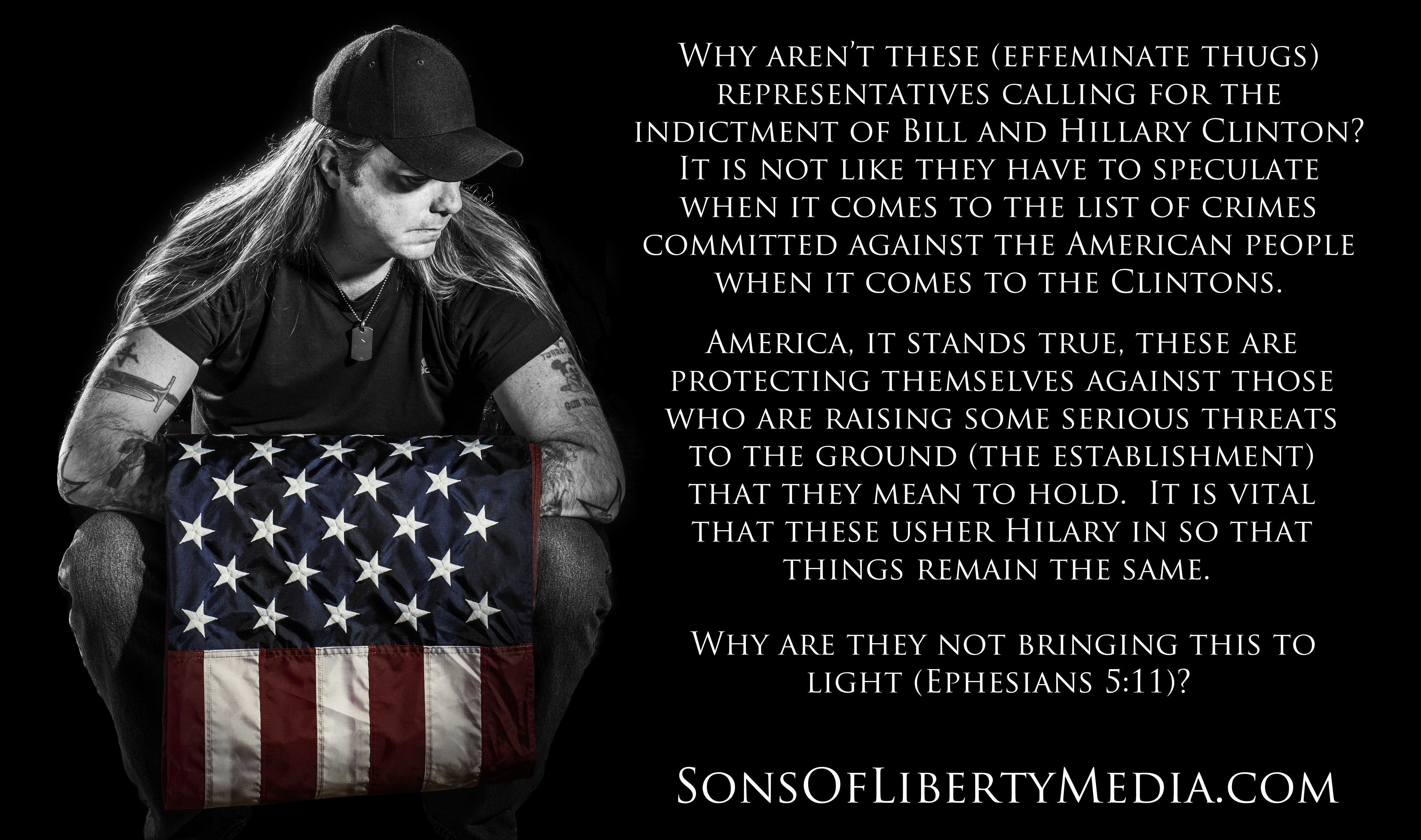 We know that just recently it was found that the Clintons are selling Uranium Ore to the Russians from underneath the ranchers in Oregon.

Why are they not bringing this to light (Ephesians 5:11)?

What of the Travelgate scandal? Whitewater scandal? Filegate scandal? Lootergate scandal? Drug Dealer Donor scandal? Ponzi scheme and political favor scandal? Benghazi? The email scandal? Mena, Arkansas drug trafficking scandal? What of the dead bodies strewn across the path of the Clintons (147) and the list goes on and on concerning who Hillary is and what she is truly about.

Why are they not calling her out America? To call out Hilary for these would be the same as exposing themselves in so many different ways. Just look at their records. They are just as guilty as she is, and that is exactly why they are attempting to protect her.

America, it stands true, these are protecting themselves against those who are raising some serious threats to the ground (the establishment) that they mean to hold. It is vital that these usher Hilary in so that things remain the same.

We were warned by George Mason in Article 3 of Virginia’s Declaration of Rights:

That government is, or ought to be, instituted for the common benefit, protection, and security of the people, nation or community; of all the various modes and forms of government that is best, which is capable of producing the greatest degree of happiness and safety and is most effectually secured against the danger of maladministration; and that, whenever any government shall be found inadequate or contrary to these purposes, a majority of the community hath an indubitable, unalienable, and indefeasible right to reform, alter or abolish it, in such manner as shall be judged most conducive to the public weal.

Overthrow of the government?

I agree – they want Bernie Sanders out so bad! Hillary and the republicons because they are working toward the same agenda where as Bernie Sanders is working for the people.

I don’t like Bernie Sanders, either. Seems to me he plans to pipe Paul Robeson through the White House p.a. system twenty-four hours a day. “Uniting the people in friendship and labor, our people’s republics will ever endure!…”

Terry Hurlbut I tend to like Paul Robeson and I don’t have a good understanding of the man either. He was a great US patriot – too bad our system was already too corrupt to realize that.