It really isn’t difficult to see quite clearly that the many, many Republican Debates have but two purposes. The first is to butcher up the one candidate who will be doing his own butchering after he gets elected. The second is to collect gobs of advertising dollars.

Should Trump bother with debates anymore? 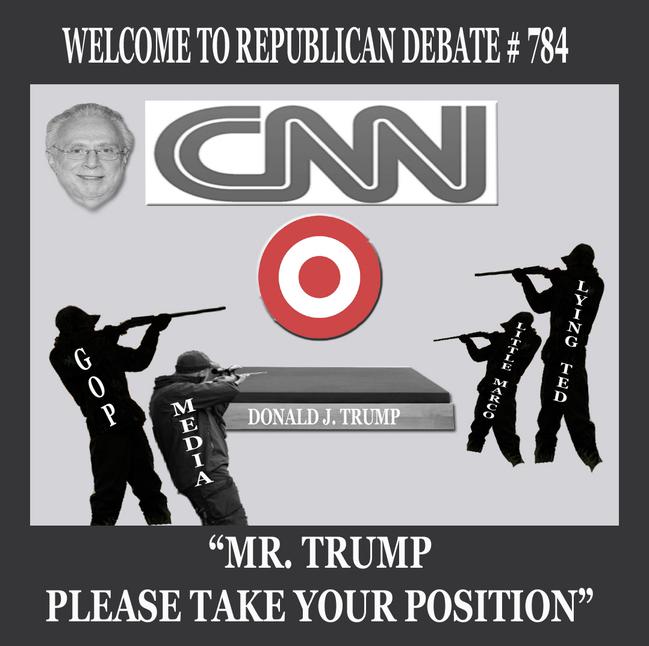 There is major apprehension relating to the upcoming debate Thursday night on CNN. It is the belief of just about 100% of our readers that the three branches of the “establishment”, which include the GOP, the media and the Democrats are using these debates, not to get clarity on issues and stances, but to destroy Trump’s candidacy. This for certain is no surprise to Mr. Trump or his advisers, but I’m not sure if they know that what they are doing is beginning to affect Donald’s popularity.

TPATH’s readers have overwhelmingly told me that they think Trump should not attend any more of these coordinated assaults. There can be no advantage to showing up for them. For sure, they will attack him if he’s not there but it will have very little affect since without Trump, very few people will be watching. As far as my readers are concerned, 11 debates are about 6 too many. This next one may be the one that breaks the camel’s back. We need Trump and if he loses this race to the presidency it will be not just his loss, but America’s.

One of the great and wonderful things about Trump is how he has been able to rewrite the textbook on how to run a campaign. He has been rogue on many fronts. It is now time to take that rebellion to the next level. Tell those scoundrels they have had their chance. They get no more. They need him, he does not need them.

OPTION ONE (preferred): No more debates!

Contact the GOP and tell them Trump is through allowing himself to be set up for destruction in another unfair, biased and deceitful establishment attack. He should make it clear he has answered every question, over and over and no one in this country or the world, who is even slightly interested in politics, does not know his exact positions on every issue.

Then schedule a massive rally in Florida in the largest venue that can be found. Schedule it for the same time slot as the CNN debate. Make this rally different from the usual format by setting up a front row for the media and make the first half hour a Press Conference. It would be great to see how many of the evil press decide to be at this rally as opposed to that attempted assassination event they call a debate.

OPTION TWO (if you decide you must go to the debate and we really, really hope you don’t)

Ignore every attack on you, like it didn’t happen. Mention calmly that the attack is a lie and when you get a rebuttal, have a statement ready on one of your issues. Use all the rebuttal time they give you, on every occasion, to get another issue point out.

Then on every question they ask you, if it is a gotcha question, one not meant to illicit information but one that is intended to deceive or contort your positions, totally ignore the question and use you one minute to bring forward another issue. The further away  from the question, the better. Then when they give you 30 seconds more to actually answer the question they will accuse you of not answering, present another short issue you would like to get out.

They will continually tell you to answer the question and you should always answer it with yet another campaign pledge. Every time someone attacks you during the debate, demand your response time and then hit them with another important issue from your campaign.

At some point they will get frustrated and demand you answer the questions at which point you should say debates are meant to get the candidate’s opinions, ideas and intentions, out to the public. And since the questions you are asking and the sneaky attacks on me do not do that, it is my obligation to see to it that the people get what they tuned in to here to learn.

Option One is the best, Option Two however would be so much fun.

Related Topics:candidateelectionmediapoliticianspresidentTea Party
Up Next

I agree …. He should buy an hour of prime time and lay out his plans, it’s like a bunch of rabid dogs attacking him including the moderators……waste of his time