A society whose citizens refuse to see and investigate the facts, who refuse to believe that their government and their media will routinely lie to them and fabricate a reality contrary to verifiable facts, is a society that chooses and deserves the police state dictatorship it is going to get.

Ever since I can remember, I have always heard of people referencing the analogy of the frog in the pot. You know the one where the frog that boils little by little without anyone’s notice until the point that it boils the frog to death? Yet, it never ceases to amaze me that according to the American people, for some reason or another, that water never seems to boil the frog to death. However, everyone can smell it except the American people!

The American people have themselves to blame

The sad part is that Americans have no one to blame but themselves (Luke 7:30).

Either Americans are going to bring forth judgment to establish righteousness concerning corruption or God’s judgments will fall upon our land to America’s destruction. There is no in-between.

This is the message America is either going to accept or reject (Acts 20:21).

They that observe lying vanities forsake their own mercy. (Jonah 2:8)

Let me say it this way, the frog is not only boiled but has been boiled to death.

When are the American people going to take responsibility and turn the heat up on those who should be in the pot of boiling water?

This is where Americans are failing the test (Amos 5:24).

It is now at the point where the American people are legitimizing, or at least allowing, the media to set the narrative. We have a full-fledged Communist Bernie Sanders (who is garnering support from America’s ignorant and dumbed down posterity, Hosea 4:6) and world renowned, repeat criminal Hillary Clinton are actual candidates for the presidency of the United States. Keep in mind that their support is contrived out of thin air, and does not exist.

And that is just the left side of the deceptive paradigm. But the American people already knew that (Jeremiah 5:21).

This has all taken place over the course of decades because the standard has become lower and lower through an incremental demoralization and dumbing down of the American people.

Remember that we now live in a nation where doctors either destroy health or the doctors that promote health are killed.

Universities destroy knowledge by accepting burnt communist hippies that are still tripping on PCP to indoctrinate their posterity.

Religion destroys morals. The greatest advocate to the homosexual and abortion lobby is the professed church in America.

America, you already knew that!

Our banks destroy the economy.

Where the American people are today

American Government has become a system of dangerous incompetent, corrupt, vile, oppressive and ungodly compromised special interest operatives and minions. This is because the people in this country are just as corrupt as those they allow to remain in office, who go so far as to even rig the voter polling machines to win elections that they could not otherwise win.

But the American people knew that.

In fact, these people are so corrupt that if these things were taking place in a foreign country, the American people would demand our government send in the military to get them out of power. However, since it is at home, they accept the corruption.

Rather than judging what is in plain sight, Americans have become submissive little slaves to a totalitarian system (John 8:34) by believing what they are told rather than by what it is that they see.

LaVoy Finicum is just one example. He was ambushed by the FBI and shot dead on a desolate highway in Oregon. Of course, the feds and the Oregon State Police are attempting to justify the murder of Finicum. All of this is taking place so that corrupt politicians can steal the resources of the state’s land to continue their unlawful behavior. 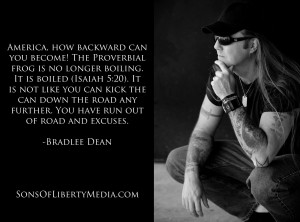 America, how backward can you become! The frog is boiled (Isaiah 5:20). It is not like you can kick the can down the road any further. You have run out of road and excuses.

Instead of the grown-ups actually growing up into the grace of Christ (2 Peter 3:18), leaving off corruption and taking on incorruption (1 Peter 1:23), they look to excuse themselves; and the things that they excuse, only lead to America’s demise (Isaiah 30).

Were they ashamed when they had committed abomination? nay, they were not at all ashamed, neither could they blush: therefore shall they fall among them that fall: in the time of their visitation they shall be cast down, saith the LORD. (Jeremiah 8:12)