Earmark – “To mark, by cropping or slitting the ear.” Webster’s 1828 Dictionary

This last week and a half have been a history lesson only to reaffirm and solidify the message in which I have been preaching for the last 20 years.

While speaking at colleges, churches, on radio and other meetings this last week, I traveled through Maryland, Virginia, Delaware and then Pennsylvania. Let me share a few of the lessons I learned.

First, I stopped off at Jamestown, Virginia. Upon entering into this gated replica of a village that was established by the first settlers to come to this land, known as “Saints” now known as the Pilgrims, the first thing that I saw is a large church.

When entering the church, I saw on the front walls the 2 tablets of God’s moral Law (Exodus 20; Deuteronomy 5).

In between the Ten Commandments is the Lord’s Prayer (Matthew 6:9-13). When walking out from the front, there on the back wall was written:

“Then Peter said unto them, Repent, and be baptized every one of you in the name of Jesus Christ for the remission of sins, and ye shall receive the gift of the Holy Ghost.” Acts 2:39

I then traveled over to Yorktown, Virginia, where the American colonies, along with the French, delivered the final blow to the British Empire by breaking the back of Cornwallis and his disgraced military.

There in Yorktown, was the Victory Statue, where it was inscribed:

That the United States in Congress assembled, will cause to be erected at York, in Virginia, a marble column, adorned with emblems of the alliance between the United States and his Most Christian Majesty; and inscribed with a succinct narrative of the surrender of Earl Cornwallis to his excellency General Washington, Commander in Chief of the combined forces of America and France; to his excellency the Count de Rochambeau, commanding the auxiliary troops of his most Christian Majesty in America, and his excellency the Count de Grasse, commanding in chief the naval army of France in the Chesapeake.

I then set off to Williamsburg, Virginia, where close by was where Patrick Henry gave his famous speech.

It is vain, sir, to extenuate the matter. Gentlemen may cry, Peace, peace! But there is no peace. The war is actually begun! The next gale that sweeps from the north will bring to our ears the clash of resounding arms! Our brethren are already in the field! Why stand we here idle? What is it that gentlemen wish? What would they have? Is life so dear or peace so sweet as to be purchased at the price of chains and slavery? Forbid it, Almighty God! I know not what course others may take; but as for me, give me liberty or give me death! – Speech at the Second Virginia Convention at St. John’s Church, March 23, 1779

True meaning of earmarks: the stocks

Just down the street in Williamsburg were the head and arm restraint stocks, which were located right outside of the local courthouse. A historian and reenactment actor was outside educating the people who had questions.

One question asked was, “What is the head and arm restraint stocks for?” She said that before and after the revolution, the local magistrates would administer Ecclesiastical Law (Romans 13).

She went on to tell us that crime was not tolerated in the least bit by the colonies because they understood the price paid to establish their freedoms (John 15:13). The stocks were used for those who would lie or commit the act of perjury (lie under oath; Revelation 21:8).

The criminal would be punished by being thrown in jail for up to 6 months (1 John 3:4). A fine would have to be paid, and this all took place after their head and hands were placed in the stocks for their crimes and public punishment.

When removing the nails, they would often slit the ear completely off, marking the offender so other colonies, as well as other cities or states, would understand that the person was not to be trusted. Thus, they fulfilled the true definition of “Earmark.” 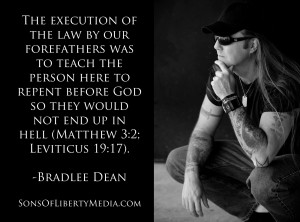 She ended with saying that it was to teach the person here to repent before God so they would not end up in hell (Matthew 3:2; Leviticus 19:17).

Can you imagine the “earmarks” that we would see today in the American church, government or in businesses if these laws were still enforced? How they loved their freedoms by demonstrating zero tolerance for crime. (Deuteronomy 23:14).

Oh, the efforts of foolish men today (they are fools for their pains), such as the modern day revisionists, historians and even professed uneducated self-proclaimed Christians, who have attempted to re-create America’s founding forefathers in an image not of their own. How many earmarks there would be on the lot of all of the above who are helping to blind the up and coming generations, which is a curse they will surely bear.

Reading of the Declaration of Independence

Ishmael, Al-Aqsa, and the enemy

It is no accident that Congress uses the criminal term “Earmark” when they put things into bills that have nothing to do with the bill in order to steal more tax payer dollars to fund their pet projects and to buy votes.

That method punishment and was effective! Maybe they should bring that back?

And a few others for that matter!

Forgive the phrase, but I think that tour guide was pulling your ear. I can’t find any references that this practice was applied to people or as a criminal punishment in the manner described. Wikipedia, m-w, and dictionary.com all only provide it as for livestock ownership.