“And they had the American people believing that they were the victims….” Have Americans now become so demoralized that they do not even realize the severity of those who are transgressing the law and what it is that they are clearly attempting to promote? (Jeremiah 5:21) They are making our innocent the prey to sexual predators. This is what Target stores are now attracting.

Friends, I have spoken thousands of times, from public high schools to colleges to tea parties, television, and radio across the country. If anyone were to even suggest the things that Target and the President of the United States are attempting to advocate by force, it would not be long before that person was thrown into a prison cell for a long time.

The Obama administration has threatened North Carolina to either accept a “Gender Neutral Bathroom bill” led by a known sodomite pedophile named Chad Severance, or federal funds will be cut from that state. What does that suggest America? Mask off!

In the state of Minnesota, according to Statute 609.342 Subdivision 11, a person in sexual contact with a person under 13 years of age may be sentenced to imprisonment for not more than 30 years or to a payment of not more than $40,000 or both. How is it that both Target and the Obama administration are advocating that which is clearly illegal? This is not about people using the bathroom. It’s about targeting the innocent.

This should all be called for what it is “The Pedophilia Enabling Act” which is criminal from the beginning to the end.

Michael Swift’s Homosexual Manifesto, which was printed in Gay Community News in February 1987 was also entered into the congressional records. Here’s what he wrote.

“We will unmask the powerful homosexuals who masquerade as heterosexuals. You will be shocked and frightened when you find that your presidents and their sons, your industrialists, your senators, your mayors, your generals, your athletes, your film stars, your television personalities, your civic leaders, your priests are not the safe, familiar, bourgeois, heterosexual figures you assumed them to be. We are everywhere; we have infiltrated your ranks” (Leviticus 18:22; Romans 1:24-27).

The case against Target

America, why is it that the Brian Cornell, the CEO for Target, is not being held accountable for the said crimes that have taken place in Target stores across the country with his companies policies? A little common sense comes into play here. Is he not the one that gave a green light for sexual predators to prey on the innocent? That is what is happening.

Speaking of sexual predators in Target stores, check out these criminals who have been caught committing their crimes.

A Kentucky man has been charged with the sexual assault of an 11- year-old girl at a Target store.

Surveillance camera images of the suspect leading the girl through the store have been broadcast nationally.

Allen D. Coates, 37, of Irvington, Kentucky, was arrested Wednesday afternoon in the downtown area of Louisville, where he is being held at the Metro Corrections Facility…

Allen D. Coates, 37, of Irvington, Kentucky, was arrested Wednesday afternoon in the downtown area of Louisville, where he is being held at the Metro Corrections Facility…

The girl was assaulted July 12 at knifepoint after she and her mother separated in the store to do individual shopping, authorities say.

Surveillance video from inside the store shows a man wearing a gray, sleeveless T-shirt, baseball cap and shorts roaming the aisles. Just before the sexual assault, he can be seen holding the girl’s hand and leading her through the store.

Comment: Now he’ll be able to loiter outside bathrooms and fitting rooms and wait for 11-year-olds shopping by themselves to answer a call of nature or try on a blouse.

A Jefferson man arrested on Friday after police said he followed and then touched a 12-year-old girl and a 13-year-old girl in separate incidents could face “multiple” child sexual assault charges, a prosecutor said in court Tuesday…

[T]he girl said that a man approached her and a friend in the shoe section of the Target store, then followed them before he “purposefully” veered into the girl and brushed against her upper thigh and lower buttock area.

Comment: Now let’s imagine that the perpetrator does not have to accost her in the shoe section but can follow her without any questions asked into a bathroom or a fitting room. What father in his right mind is going to allow his teenage daughter to shop at Target ever again?

On Tuesday, St. Louis City Police confirmed that they are investigating the sexual assault of a 13-year-old female inside the Target store on Hampton Avenue in south St. Louis Monday night. Police say the suspect walked past the victim, squeezed her buttocks, then walked away. The girl told a relative and police were called. St. Louis Police are not commenting on whether or not their case could be connected to the Alverson or Mehlville cases.

Comment: All this man will have to do now is wait outside a Target bathroom of fitting room until your 13-year-old daughter enters, then follow her right on in.

South Bend police are looking for a man who performed a sexual act Monday afternoon at a Target department store at 1400 E. Ireland Road, according to our news partner ABC57.

A 16-year-old girl was shopping at the department store when a man approached her from behind and performed a sexual act on himself at about 2 p.m., police said. The man got away, and police are still looking for him.

Comment: Now that men can simply follow a 16-year-old into a dressing room, commit the sexual act while the victim is putting her clothes back on, how many more of these incidents are we going to read about?

San Leandro police say they have a person in custody for allegedly assaulting two young girls inside two different stores on Monday night.

Police arrested the suspect, a 20-year-old parking attendant, a couple of hours later at his place of work on the Peninsula.

Investigators are convinced, he is the man shown in the store surveillance videos, first at a Walmart, then at a Target store Monday. It was in those two store where he allegedly groped two young victims within 15 minutes of each other.

“I do know that people in this, from my training and my experience, that these people that have this desire to offend against children, will do so pretty much at all costs,” said McManus.

The suspect has been arrested on two counts of felony lewd and lascivious with a child. Police say he does have a criminal record, but not for any similar offenses.

Comment: If they will offend against young girls “pretty much at all costs,” the last thing they need is for Target to help them by providing private areas where the assaults can occur.

Sandy authorities have arrested the suspect accused of sexually assaulting a girl at a Target store in Sandy.

He turned himself in after he learned police were looking for him.

Officials said a man approached an underage girl who was shopping with a friend Aug. 7.

Sandy officers said the suspect briefly talked to the girl and then sexually assaulted her.

A jogger and Target security officers helped Folsom police track down and arrest a man wanted in connection with sexual battery and an attempted rape Saturday.

Comment: Why would a deviant now need to follow women through the store when he can wait for them inside the women’s bathroom or a fitting room where there are no cameras?

Authorities in Hanford say a man has confessed to placing a hidden camera inside a restroom of a local Target store. The suspect was identified as Eugenio Rodriguez, 32, of Hanford.

Hanford police responded to the store on North 12th Avenue on Wednesday after an employee found the camera in the family restroom. They say the camera was concealed with toilet tissue and had a red light illuminating before the employee turned it off. Officers say the camera didn’t record anything but it did stream live video…

A criminal case was sent to the DA’s office charging Rodriguez with using a concealed camera to view a person’s body in a private room.

Comment: You think Target has a problem with video voyeurism now? Just wait until perpetrators have unimpeded access to fitting rooms and restrooms where they can install their hidden cameras in ever more creative and hard to detect ways.

A Six Mile man accused of taking pictures and video of people using the restroom at Target has been arrested, according to Anderson police.

According to the incident report, police were called to the store on Thursday where one victim said the suspect had a cellphone positioned under the stall to capture video of men at the urinals.

Comment: Now that video voyeurs have the same unrestricted access to your daughter’s restroom and fitting room, you’ll be reading about more incidents just like this. It might be best to keep your daughter out of Target altogether.

Athens-Clarke County police have arrested a 26-year-old man for being a peeping Tom in the women’s room at a Target.

Police say Luis Mesqueda Hernandez was caught on security cameras sneaking into the women’s bathroom at the store Sunday afternoon and using his cell phone to take photos of a woman. The store’s security officers detained Hernandez until police arrived.

The woman told police she did not notice Hernandez was in the bathroom. 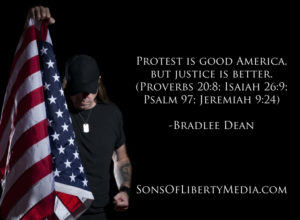 There are more than two dozen such stories like those above that have occurred in Target.

When the American people long to have their country back and start holding the guilty parties accountable to the laws that have been transgressed and violated, then, and only then, will she begin to understand what liberty is all about. Protest is good America, but justice is better (Proverbs 20:8; Isaiah 26:9; Psalm 97; Jeremiah 9:24).

Racism, voodoo, and the Pope