“Mercy to the wicked is cruelty to the innocent.” Elijah Woods, actor of Lord of the Rings fame, in a manner similar to that of actor Corey Feldman, is coming forward to awaken the American people to the Pedophile organized parties in Hollywood. Woods claims that numerous “parties” that were “organized” and set up so that innocent, young, naïve actors could be “preyed upon” by the Hollywood elite.

“There is darkness in the underbelly—if you can imagine it, it’s probably happened,” Woods told the London Times.

They said it was a lie…

I remember that when I began to warn people back in 2006 of the things that were happening in public schools concerning the National Education Association and the sodomites, that my ministry came under much media attention and scrutiny. I also came under ridicule from those who should have known better: the counterfeits in the Churches, the conservatives and such.

I was being accused of hate, bigotry, homophobia, you name it. Whatever the accusation was, somehow or another, I was guilty of it. That is what the media (6% approval rating; Romans 1:18) wanted the public to believe in.

Now, 10 years later, the American people realize what I was warning about.

…while taking a prey

I warned that these sodomites were zeroing in on America’s young, even preschoolers. Yet, to the shame of the American people the victims themselves were not heard.

Even now, we are hearing of teacher on students crimes on a weekly basis.

The “useful idiots” reported that I was calling for the “killing of the gays” (Rachel Maddow and MSNBC) and the “persecution of the gays.” I was even accused of making statistics up concerning the crimes of the sodomites against the children. Of course, they were reporting the exact opposite of what was true. They were shooting the messenger, and they did not want the American people to believe that they were capable of the crimes that they were, and are, committing on a daily basis. They even wanted you to believe that the “Gay Manifesto” was just a satire. How is that working out for you America?

A satire it is not! This could never have been accepted if they had not deceived the people into believing that they were somehow or another the victims. The fact is these are the transgressors of the law (1 John 3:4).

Does the government itself ordain such preying?

Now we have the Target CEO, along with tyrannical permission from the criminal in the White House, giving the green light to make children a prey in the face of sexual predators, which, in fact, both should be lawfully accountable (Romans 6:23).

The reality is that they are taking it another step by attempting to normalize the transgender lifestyle (Deuteronomy 22:5).

Barack has recently appointed a transgender to the presidential council.

He also appointed an open sodomite to the Secretary of the Army.

These are the same kind of people who go so far as to self-inflict crimes only to blame the innocent (Deuteronomy 19:15-21).

Every step of the way these people have revealed themselves…

Kevin Jennings of GLSEN even said that bullying is the affirmation of the sodomite lifestyle. In other words, make yourselves the victims while you perpetuate the crime. 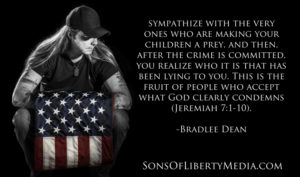 You sympathize with the very ones who are making your children a prey, and then, after the crime is committed, you realize who it is that has been lying to you. This is the fruit of people who accept what God clearly condemns (Jeremiah 7:1-10).

Then, there is Larry Brinkin. Click here to read more on this racist, sodomite pedophile.

Companies that are allied in advocating sodomy (Isaiah 28:18).

Americans can apologize, by bringing forth fruit through repentance (Matthew 3:8) to their posterity by standing up and defending them, as well as prosecuting those who are guilty of the crimes. To do otherwise is cruelty to the innocent.

Moral relativism: cancer of the West