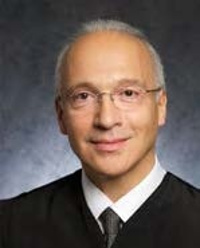 Who is United States District Court Judge, Gonzalo Curiel? What is the La Raza Lawyers Association of San Diego, California?

Judge Curiel and his questionable associations

Curiel’s involvement with the La Raza Lawyers of San Diego should be particularly troubling given the organization’s repeated anti-enforcement of illegal alien law measures.

From the Daily Caller: Judge Presiding Over Trump University Case Is a Member Of La Raza Lawyers Group. La Raza translates to “the race” in English.

La Raza Lawyers Association of San Diego told The Daily Caller, a daily news paper who’s Chief Editor is Tucker Carlson, in a statement Wednesday. “We help empower Latino attorneys, judges and law students, and provide services to the greater local Latino community.” You can read all about the organization’s open border, pro-illegal immigrant activities on their website. (Curiel is a member)

The National Council of La Raza is the largest Hispanic advocacy group in the nation and has taken a strong stance against Trump. (Curiel is a member) They previously called Saturday Night Live a platform for “hate” for inviting the New York businessman. La Raza translates to “the race” in English. (Curiel is a member)

The National Council of La Raza accused NBC and its iconic show “Saturday Night Live” of becoming a platform of “hate” for inviting Republican presidential candidate Donald J. Trump to host the program on Nov. 7. (Curiel is a member)

Janet Murgia, president of the NCLR, said she expected better out of a network that over the summer severed ties with Mr. Trump after he announced his campaign with a vow to get tough on illegal immigrants, and accused Mexico of sending rapists and other bad elements to the U.S. (Curiel is a member)

United States District Court Judge Gonzalo Curiel, the man presiding over the class-action lawsuit against Trump University, is a member of the La Raza Lawyers of San Diego and oversaw the gift of a law school scholarship ($1600) to an illegal alien, Ricardo Elorza, who described himself as “undocumented.”

In his 2011 judicial questionnaire to become a federal judge, appointed by Barack Obama, Curiel revealed his history with La Raza. GotNews.com originally reported this Tuesday, and The Daily Caller has independently verified.

The judge lists “La Raza Lawyers of San Diego” as a legal association he has been a part of in the questionnaire. His office at the United States District Court for the Southern District of California confirmed to The Daily Caller the judge’s membership in the group.

Curiel reveals more ties to the group in his questionnaire. He has spoken at two receptions held by La Raza Lawyers of San Diego, the most recent being in 2011. Last year, the group also held a reception for Curiel. The description of the event says, “This year we are proud to be honoring Judge Gonzalo Curiel at our reception and recognizing him for his leadership and support to the community and to our Association!”

Just try to imagine for a moment if Donald Trump was a member of a group that promoted and assisted no one in America but white people, a White advocacy group if you will. La Raza Association is the largest Hispanic advocacy group in this nation, and Judge Gonzalo Curiel is a member of this group. Do you see Donald Trump’s point in this controversy? Do you really believe this judge can be unbiased and fair to Donald Trump in a lawsuit case? What you have just read here are absolute facts. You all know as well as I, the biased news media won’t reveal these facts. It’s your decision.

Translation: For the race, everything. For [those] outside of the race, nothing.

You seem to be (unintentionally, I’m sure) mixing up three different organizations:

La Raza National Lawyers Association (known as Hispanic National Bar Association for the last 30+ years): this is the one Curiel is actually a member of.
National Council of La Raza: this is an unrelated organization of which Curiel is not a member.
MEChA (the one whose slogan you mention in the footnote): another unrelated organization that Curiel is not a member of.

I know you all pride yourselves on your journalistic integrity, so I assume a retraction is forthcoming.

Unrelated? With the same name? And I have only your word on it that La Raza do not have that slogan. Though I know all about MEChA (Aztec Imperial Chicano Student Movement). I also know, from my own reading, about the kind of organization La Raza in its various forms really is. I have read La Voz de Aztlan. You will likely say, “That’s MEChA, not La Raza.” All right: so you say none of those three organizations has anything to do with the other two. So when did LRNLA condemn NCLR or MEChA for anything they said? And why did the invitation to the judges’ reception give the name of the sponsoring organization as LRNLA?

So the truth finally comes out

We just stayed at the Trump Hotel in NYC for 5 days. The people at the front desk were African, the doorman and bell captain were Hispanic and the housekeeping staff was Asian. Plenty of women working there too. If the guy is supposedly such a racist and misogynist, why would he employ those people at his property?

You’re right. He wouldn’t. Nor would they stay.

Wow, Terry. Some journalist you are. You’re essentially asking “how do you know they’re NOT related?” You’re the journalist here. You tell me how they ARE related (beyond “they share part of their name,” which is silly unless I can assume you’re affiliated with the Council of Conservative Citizens. You haven’t condemned them, have you?)

That’s exactly what I’m asking. I’m asking you to show me, in the face of an on-line invitation that clearly evoked a relationship, why that relationship does not exist.

Administrative separation is not enough. Not in the face of common goals.

I see these common goals: defining “Mexican” as a race apart, and reviving the Aztec Empire.

Of course, I don’t know any outfit calling itself Council of Conservative Citizens. I’ll reserve judgment until I’ve read their platform, organs, etc.