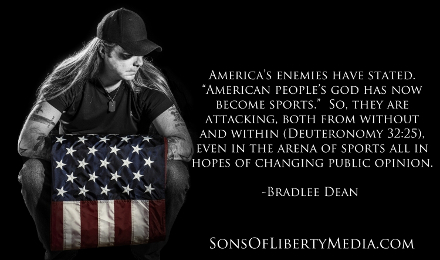 “Islam is not a religion of peace, it’s a political theory of conquest that seeks domination by any means it can.” So says Ayaan Hirsi Ali. But who knew then that sports would become such a means?

I have shown you in the past that musicians are the real legislators when it comes to overthrowing established laws in this country. Surely this includes the gods in the arena of sports and its players (Jeremiah 11:13).

The god of sports

Furthermore, I have shown you in times past that America’s enemies have stated, “American people’s god has now become sports.” So, they are attacking, both from without and within (Deuteronomy 32:25), even in the arena of sports all in hopes of changing public opinion.

Football, beer, and above all gambling, filled up the horizon of their minds. To keep them in control was not difficult. –George Orwell

Whoever can change public opinion, can change the government, practically so. –President Abraham Lincoln

Therefore, it should not come as no surprise when I tell you that Colin Kaepernick, the new NFL’s “useful idiot”, who recently converted to Islam before his anti-American stance in hopes of changing public opinion.

The controversy started when Kaepernick who rejected reality while giving over to the propaganda refused to stand for the national anthem during a pre-season game (Protesting racism while supporting Black Lives Matter, P.S. Colin was adopted by white parents), telling NFL.com:

I am not going to stand up to show pride in a flag for a country that oppresses Black people and people of color.

Oppressed, really? Colin’s life proves the opposite while signing an 114 million dollar contract with the NFL. Apparently, Colin has failed to remember that those he calls oppressed, do live in America where they become what they work to become (2 Thessalonians 3:10). Furthermore, he should know that no one gets to the top of the mountain because anyone dropped them there. It’s because they worked hard to get there.

As a matter of fact, let’s take a quick look at others that are oppressed as Colin.

Colin went on to say, to me, this is bigger than football, and it would be selfish on my part to look the other way. There are bodies in the street and people getting paid leave and getting away with murder. …

This didn’t sit too well with most Americans, and led veterans, like Medal of Honor recipient Dakota Meyer, to respond:

Colin Kaepernick needs to remember that a lot of men and women bled for that flag he refuses to stand for. A lot of those men and women were African-Americans who fought, bled, and died on behalf of that flag and those freedoms.

During a press conference, where other useful idiots, the media, were eager to make him a fellow propagandist, Colin added insult to injury by wearing a shirt, which had photographs of the 1960 meeting of former Cuban dictator Fidel Castro and Malcolm X, which read, “Like Minds Think Alike.”

Oh, what Americans put up with! They stand back and allow this man, like that of this criminal administration, to desecrate the fallen. It bewilders me to no end (Hebrews 10:26-31).

America, what has been the behavior of Muslims like Colin Kaepernick and Muslim organizations in this country?

Have Muslims and their illegal organizations exhibited a spirit of cooperation or have they repeatedly urged Muslims not to cooperate voluntarily, but to carefully go through them? Have they not indeed encouraged the Muslims, and a credulous media that believes uncritically Muslim complaints, the idea that Muslims are being “victimized”?

Though foreigners can take asylum in this country, they are to assimilate to the American way, not Americans assimilating to them.

What should we do?

It is not legal in this country to by force, violence or other unconstitutional means overthrow the United States Constitution. No, it is not free speech to aid or abet the enemies within or without.

Islamic immigration alone to the US should be prohibited. The Koran, Sharia Law, and the hadith all require complete submission to Islam which is antithetical to the US Government (Public Law 414, Chapter 2, Section 212).

So, as to know what you are dealing with America, remember what Mustafa Carroll, the executive director of the Dallas-Fort Worth CAIR branch, said,

If we are practicing Muslims, we are above the law of the land.

Boy, oh boy, did Colin act accordingly. Talk about the American people being entertained out of their freedoms. They are even paying them to do it!

Let them see red on November 8

Libs in sports is as evil as them determining what a minister can say now from the Bible. Everything they get their fingers into will be attacked at that point.

The gods of the United State’s are pleasures, position and power. So sad to see the state we’re in. But the true and living God said these things will happen. So we can’t let this rob us of the joy of our salvation. We have much to be happy about. ❤️✝????????????????