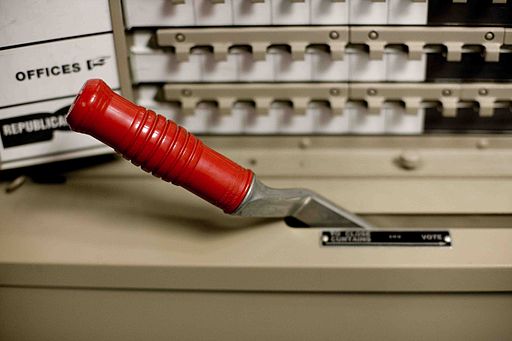 You, like so many of us patriotic, conservative Republicans, might be wondering just how the Republican Party came to identify with the color red. That color unquestionably is antithetical to every political identification format the world over.

For example: the communist Soviets emblazoned their flag with a deep crimson background in striking contrast of an intense yellow logo. The Red Brigades formed in 1970 as an extreme left wing paramilitary group with origins in Italy. They also used a red flag with yellow inscriptions. Then we saw the Japanese Red Army which formed early in the 70’s decade. They too were militaristic communists who sought the overthrow of the Japanese system of government as well as the Monarchy. Their flag? Yes, a bright blood-colored star with a machine gun logo in the center. Then we have the red of all red, the People’s Republic of China.

So who saddled the Republican Party with red as its defining color?

How did the leftist Democratic Party manage to abscond with the color blue? A color long associated with conservatives? Back in 1976, NBC and the world famous John Chancellor correctly labeled the states voting for Carter as red and those going for Gerald Ford as blue, during that year’s campaign. The leftists realized that associating with red could and would open some eyes as to the direction of the Democratic Party. Back then as it is today, deception was the rule. So a concerted effort by both ABC and CBS, to change the color from red to blue, got underway.

For a while some networks were using red for Democrats and a few others were using blue. This of course made switching between channels confusing for the broadcast viewers. Consistent with the spineless Republican leadership of today, the wiggle back Republicans of the early 80’s sat back while ABC and CBS decided what color to associate with them. They, of course, chose red. No longer would the Democrats be flying the red flag of leftists which so closely embodied what they were becoming. Meanwhile the idiot Republican Party stood on the sidelines and let it happen. Some things my friends, never change.

By the end of the 2000 hotly contested election results, as the foolishness of hanging chads and moronic old geezer Democrats who voted for Buchanan, Bush and the Pillsbury Doughboy when they really, really intended to vote for Algore, millions and millions of people across the country watched the lunacy every night for weeks. This opened the door, while the clueless Republican Party dithered, for the leftist news media’s successful hijacking of the color blue for their pinko party.

So, they want red?

It takes a very special lack of intellect or a strong motivation to deceive, for anyone such as the world class liar as is Obama, to suggest that the voting systems operating in unmonitored liberal bastions of this country are pure and untainted. Now a lack of intellect may in fact be in play with Barry. But clearly the need to obfuscate the undeniable facts and endless instances of cheating which occurred in the 2012 election is front and center on the agenda.

Typical of Alinsky tactics the impostor posing as President of all the people and with the assistance of the despicable media, the attempt to isolate and denigrate anyone who would suggest or concern themselves with voter fraud is underway. In order to repeat the thievery of elections past, the people must be cowed into silence. The effort to convince the public that the coming rigged results are authentic, are now in full swing. The spurious polls being manipulated and stuffed down America’s throat everyday are merely the precursor of the coming fraud.

As corrupted digital voting machines tally votes for Hillary regardless of which lever was pulled, as frantic and repeated last minute vote casting behind closed doors throughout the several swing states rack up votes for dead people and no shows and as other machines are adjusted to show zero votes for Mr. Trump, there needs to be a way to forewarn those potential crooks into wondering if there will be some consequences. 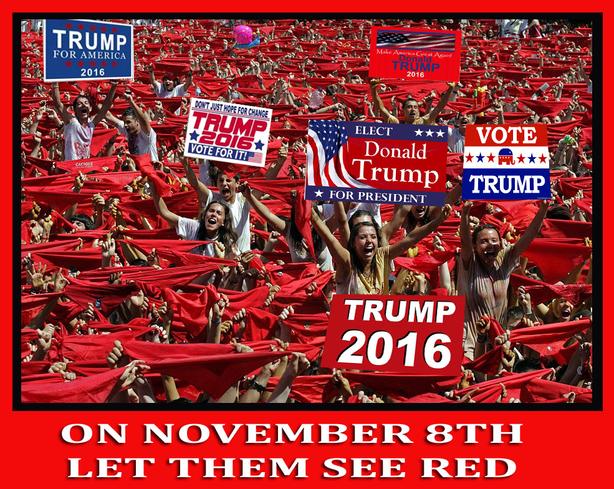 Trying to explain the possible dichotomy of results relating to long lines of voters, in district after district, county after county, state after state and all across this country by those wearing red, may instill a bit of worry into the heretofore unharried illegalities of the past. If lines into the voting booths are ablaze with red shirts, red hats, red scarves, red skirts and red pants, anything but a win for Trump would require some very real scrutiny. Scrutiny that could possibly land some people in the slammer.

The left, hiding from their true color association, have successfully and no doubt forever appropriated the color blue for themselves. They have therefore assigned uncontested the color red to Republicans. So my good friends, the left wants to see red. On November 8th let’s give them a dose of red they will not soon forget.