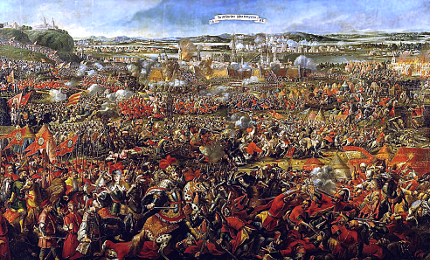 The date of September 11 is important to radical Muslims. On September 11, 1683, an invading Muslim army was on its way to overrun Italy and conquer Rome. This army was on the verge of breaking through its last obstacle of Vienna, Austria.

Surah (Chapter) 30 of the Koran was first written by followers of Mohammed around 600 A.D.. It declares that “the Romans” who “rejected faith and “falsely denied our signs” “shall be brought forth for punishment”. Muslims relentlessly attacked the Christian Roman Empire on land and sea for the next hundred years. Muslims conquered Christian Damascus (Syria) from the Romans in 634 and Jerusalem (Judea/Palestine) in 637. They went on to conquer Alexandria (Egypt) in 646, Algeria (home of St. Augustine in North Africa) in 711, and Spain and Portugal in 720. An army of Christian Franks (French) led by Charles Martel, grandfather of Charlemagne, defeated Muslim invaders in southern France in 732. Christians then slowly regained control of Spain and Portugal during the next 760 years.

During this time, Christian Europe pushed back against Muslim invaders with eight Crusades between 1095 and 1291. Their goal was to protect Christians whom Muslims were attacking, robbing, and murdering in Syria and Judea/Palestine. 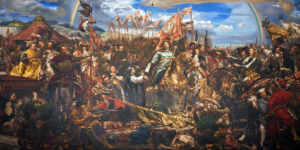 King Jan III Sobieski sends a Message of Victory to the Pope, after the Battle of Vienna, September 11, 1683. By Jan Matejko, circa 1882

However, Muslim expansion into Europe continued in the east. The Ottoman Turks of present day Turkey converted to Islam in the 1300’s. Muslim Turks completely conquered the Greek Byzantine or Eastern Roman Empire and its capital, Constantinople in 1453. In 1529, Muslim Turks conquered Serbia, Albania, Croatia, and Hungary. In 1683, a Turkish army of some 200,000 Muslims attacked Austria. They nearly broke through to Italy where they hoped to seize Rome. On September 11, 1683, the Turkish army which had surrounded Vienna during a two month siege, used underground explosions to tear large holes in the last wall protecting the City.

However, the final Muslim assault on Vienna failed the following day, September 12. On that day, Polish King Jan Sobieski surprised the Turks with an attack from behind. He then drove them out with heavy losses. 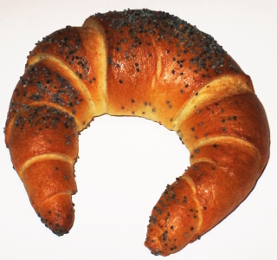 A Kipferi, precursor to the modern crescent roll. Legend says Viennese bakers first baked something like this to celebrate victory in the Battle of Vienna, September 11, 1683

We still eat bagels (shaped like the stirrups of the Polish cavalry) and croissants (shaped like the crescent of the Muslim flags) that were first baked to celebrate this victory. (Click here for “Potpourri–Origin of Croissant and Bagel”).

For the next 350 years, Muslims lost almost every war they fought against Christians in Europe, North Africa, India, and at sea. This made Jihad–holy war against non-Muslims–unpopular and out of fashion for all but a handful of fanatics in the Muslim world.

All this began to change in 1914. The discovery of oil in Middle East and a century of World Wars and Communist revolutions in the rest of the world made Muslim nations strong and rich, and the Europeans weak, divided, poor and critical and ashamed of their culture. During the next 30 years, Jihad became popular in the Muslim world again–first against Jews, and later against Christians, Buddhists, and Hindus living in countries with Muslim majorities.

When Europeans and Americans did little to oppose this, Muslims persecuted and eliminating non-Muslim minorities in Pakistan, Lebanon, and Algeria. When Europeans and Americans continued to allow this, Muslims began migrating in large numbers to non-Muslim countries in Europe and North and South America to continue their Jihad against “the Romans” who “rejected faith and “falsely denied our signs”.

Reprint from Liberty and Prosperity, copyright 2016 Seth Grossman, by permission.

This is why people need to re-learn the real history related to Islam.