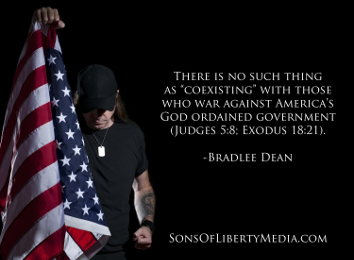 “Whenever the people need a hero we shall supply him.” – Albert Pike 33 Degree Mason. More recently, when a friend of the ministry ran for the Constitution Party in 2004, he was asked by a reporter why no one had heard of him. He replied, “They do not want you to know about me.” Why? It’s because he is not an establishment guy (One that will push forward the global agenda). His would be an opposition the globalists cannot control.

What happens to the other options?

If you remember correctly, back in 2008, there were 13 candidates running for the presidency of the United States of America. Yet, you were told of two candidates: the foreign agent in the people’s White House Barrack Hussein Obama and “Song Bird” John McCain. During that cycle in 2008, there were 312, 511, 424 people in this country and most people did not know that there were other options. They failed to pull back the curtain.

Today, there are 318.9 million people in this country and yet you have only been given two options. In fact, these two candidates are what the establishment have offered as legitimate candidates, and what the American people have accepted (Jeremiah 8:5).

Furthermore, before getting excited about your favorite candidate remember what Vladimir Lenin stated:

The best way to control the opposition is to lead it ourselves.

This is controlled opposition. Controlled Opposition is when a deliberate attempt is made to either create an opposing effort to any existing power base, or, to obtain control of any opposition to one’s own efforts. Some protest movements are actually being led by government or corporate agents.

Did you know that Adolph Hitler is the one responsible for stating,

How fortunate for those in power that people never think.

Look how Adolph Hitler was portrayed to the people of Germany during his rise to power. Less than 3% of the population supported his criminal regime.

How many look up to him with touching faith as their helper, their savior, their deliverer from unbearable stress. – Louis Solmitz, a Hamburg school teacher in 1932 (Daniel 8:25)

History teaches that the people depart wickedly from God (Psalm 119:102) and submit to the dictator. The dictator causes wars within and abroad, the people are used up for a political agenda, millions die within and without, and the country is destroyed. The dictator is dealt with by the people who finally figure out that they have been lied to. Then, they return back to the God of Israel, whom they should have not departed from in the first place.

Just to show you that there are many more options outside of the ones that you have been inundated with I lay this to your candor:

Party of socialism and Liberation

For some reason or another, the American people think that there is more than one version of the United States Constitution. There is not!

Pretty soon, Americans will be accepting God knows what concerning party platforms because of their ignorance and love of their favorite candidate, which runs counter, and that which is foreign, to God and America’s Constitution.

There is no such thing as “coexisting” with those who war against America’s God ordained government (Judges 5:8; Exodus 18:21).

I have already intimated to you the danger of Parties in the State, with particular reference to the founding of them on Geographical discriminations. Let me now take a more comprehensive view, & warn you in the most solemn manner against the baneful (Poisonous, pernicious, destructive) effects of the Spirit of Party, generally.

This Spirit, unfortunately, is inseparable from our nature, having its root in the strongest passions of the human Mind (Romans 1:28). It exists under different shapes in all Governments, more or less stifled, controlled, or repressed; but in those of the popular form it is seen in its greatest rankness and is truly their worst enemy.

Hillary: so much money, so little time

In Satan: Prince of this World, William Guy Carr, who fought in the first two world wars, quoted a letter former Confederate general Albert Pike wrote to a fellow thirty-third degree mason Giuseppe Mazzini on August 15, 1871, which is currently on display at a British museum, reading,
“The First World War must be brought about in order to permit the Illuminati to overthrow the power of the Czars in Russia and of making that country a fortress of atheistic Communism. The divergences caused by the “agentur” (agents) of the Illuminati between the British and Germanic Empires will be used to foment this war. At the end of the war, Communism will be built and used in order to destroy the other governments and in order to weaken the religions.
The Second World War must be fomented by taking advantage of the differences between the Fascists and the political Zionists. This war must be brought about so that Nazism is destroyed and that the political Zionism be strong enough to institute a sovereign state of Israel in Palestine. During the Second World War, International Communism must become strong enough in order to balance Christendom, which would be then restrained and held in check until the time when we would need it for the final social cataclysm.
The Third World War must be fomented by taking advantage of the differences caused by the “agentur” of the “Illuminati” between the political Zionists and the leaders of Islamic World. The war must be conducted in such a way that Islam (the Moslem Arabic World) and political Zionism (the State of Israel) mutually destroy each other. Meanwhile the other nations, once more divided on this issue will be constrained to fight to the point of complete physical, moral, spiritual and economical exhaustion…We shall unleash the Nihilists and the atheists, and we shall provoke a formidable social cataclysm which in all its horror will show clearly to the nations the effect of absolute atheism, origin of savagery and of the most bloody turmoil. Then everywhere, the citizens, obliged to defend themselves against the world minority of revolutionaries, will exterminate those destroyers of civilization, and the multitude, disillusioned with Christianity, whose deistic spirits will from that moment be without compass or direction, anxious for an ideal, but without knowing where to render its adoration, will receive the true light through the universal manifestation of the pure doctrine of Lucifer, brought finally out in the public view. This manifestation will result from the general reactionary movement which will follow the destruction of Christianity and atheism, both conquered and exterminated at the same time.”