At this very moment in time the United States of America, is teetering on a precipice. Sitting on a fearsome balance point is this experiment in Democratic Republicanism. This radiant beacon of freedom, this powerful economic force which has provided wealth and security not just for Americans but for so many people around the world, is about to tumble into extinction.

A cancer on America

This danger has not been quick in coming. It has been slow, methodical, relentless and ruthless. While many good, hardworking Americans toiled, endured and prospered, tried in vain to instill ethics, morality and love of God into the hearts and souls of their children, something vile, something sinister, a cancerous ideology, was metastasizing below the surface, in our schools, in entertainment, in the media and even in our churches.

We find ourselves perched on that apex, precariously balanced, where one last nudge will tip us over the edge and then, that slow plodding and treasonous conspiracy will become an unstoppable avalanche that will drag what is left of our country deeply into a paganist abyss. America, as our founders had envisioned and our fathers and grandfathers fought and died to preserve, will collapse into a black hole of socialism and ungodliness. A place where you are told what to say, what to think, where to live and what to wear. A place where your right to safety and personal security will be stripped away. Lost perhaps, forever.

This rhetoric may seem extreme to some on our side. It will seem extreme however, only if one has not been paying attention. This country is truly hanging by the last vestiges of an unraveling life line. Once that final strand snaps, no manner of grappling or clawing for purchase on a lifesaving ledge will prevent the end. This I believe with every fiber of my existence.

The Supreme Court now sits, not very unlike the country, on a balance point. The next President will appoint the ninth Justice. And possibly two or even three others may retire soon. This may sound just a little bad or make some of us feel slightly uncomfortable. My friends, it will do much more than that. It will begin the endgame’s ultimate goal of shutting down our Constitution. The forfeiture of our rights as guaranteed by our creator and defined in the Bill of Rights will find no opposition. Nothing in those founding documents will survive the total control of leftist ideology. This has been etched, over and over again, chapter after chapter, in the blood stained pages of world history.

Don’t for one minute suppose that the only danger lies in the Supreme Court. There are Federal District Courts and Circuit Courts across this country that are already infected with liberalism to the point where no amount of the rule of law will protect you from unconstitutional proceedings. The next four year presidential term will see an estimated appointment of 300 Federal judges.

Dangerous judges at any level

Think that is not a danger? Well ponder this for a moment. A Federal District Court ruling several years ago, supported a NJ Supreme Court ruling which, for all intents and purposes decreed that the Bill of Rights covers one’s home, not his person. These fools issued a decision that said a citizen’s right to protect himself, ends at his doorstep. It is quite doubtful our founders had homes and buildings in mind as they authored the Bill of Rights. More of this, much more, will be the norm if there exists nowhere to go to overturn such lunacy. There will remain but one alternative. Let’s pray that scenario never needs playing out. But just in case remain oiled, cleaned and well stocked.

Socialism in school and the media

Then there are these dangers. The government will continue to reinforce socialism in the country’s schools. They will continue to eradicate any aspect of God and good. They will remove individualism, independence, and freedom of thought and speech from the psyche of your children. These values will be lost for a string of lifetimes.

The news media has become nothing more than a propaganda arm for the political party in power, when that party is leftist. The press will become further ensconced and more deeply controlled which will forever end any possibility of a peaceful swing of the pendulum back to sanity and prosperity.

A little warning to those journalists who have forsaken the creed of integrity and professionalism in support of this flawed vision for society. If you do at some point wake up to the damage you have helped to empower, that socialist monolith will devour you first.

Is it too late? Most likely it is. But there is still a ray of hope. That hope is manifest in Donald J. Trump. This man is our last chance. He will save this country and our Constitution. He will end the corruption that he calls the swamp and I call the cesspool. In fact he has the support of good Americans who have been paying attention. Every powerful and corrupt entity now battles him with such vitriol and intensity this country has never seen. Why? Well because the criminals and the frauds in both parties, having believed their takeover was complete, fear it is unraveling at the hands of Donald Trump.

Which brings us to the Republican Party establishment. A disaster. A bunch of foolish idiots. A cadre of losers who are happy to be so. These people, living high and living well, have insulated themselves from the realities of the everyday citizen. They have no concept of the dangers they are helping to nourish. They are themselves swamp snakes nesting with and no different than those they pretend are their enemies. In truth, both parties have but one enemy. The American people, led by Donald J. Trump.

Paul Ryan pretends to take offense at Trump’s remarks, made in private to some guy he sat with on a bus. My goodness, is there any man or woman who does not have some foolish personal conversation he would hate to see in public? Is it Paul Ryan’s morally superior character that has him so offended or is it possible he sees Trump as an obstacle to himself as he ponders a 2020 Presidential run? You can decide that for yourself.

So insulated are these politicians they really don’t see the coming of the end. They don’t see that if Trump loses this election, never will another conservative win election to the presidency. In four years the leftist control of everything will be complete. 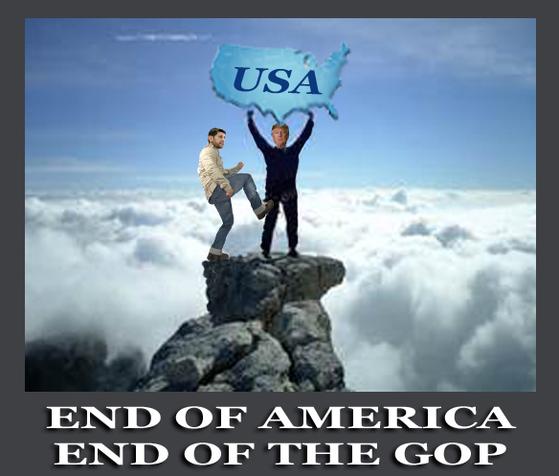 I and many old time Republicans who were active in Tea Party organizations have tried very hard over these past 8 years to head off any talk of a third party. Not because of our love for the GOP, but because the consequence of creating a third party would, during the early years of a growing voter base, hand over the government to the socialist Democratic Party. We believed that that would be the end of our country. Therefore we should fight the battle within the party, for the sake of America.

Now, the evil of socialism is about to take complete and permanent control of every aspect of our lives and they are doing it with the help of those who should have been the defenders of liberty. The GOP.

So here is a warning to the likes of Ryan, McConnell and every other traitor to democracy. If Donald Trump loses, we will hold you and your party accountable. You will win praise from the enemies of liberty but vilification by those you deserted. The fear of what would happen to this country if a third party formed, will no longer hold validity because that fear will already be real. Short of a civil war the only way to end the collusion between the Democrats and the Republicans will be to meld them into one criminal enterprise and form a new party of American patriots.

I believe he will win, but if Donald Trump loses to the corrupt, lying, criminal Clinton, it will be the direct result of GOP actions. I speak not for others but I pledge right here and now, I will leave the Republican Party forever and I will do everything in my power to help create a viable patriotic party, regardless of how long it takes.

Drain the swamp – but how?

Israel and political and economic power