It looks like Hillary Clinton will finish with slightly more popular votes than President-elect Donald Trump, who won a clear majority of Electoral votes in last Tuesday’s election.

Predictably, Democrats are clamoring to abolish the Electoral College, which the Founders created as part of the separation of powers and a hedge against mob rule.

Big states with large cities dominated by Democrats are disadvantaged by the winner-take-all rules, the Dems argue. California, New York and Illinois went big for Mrs. Clinton, but were countered by Trump victories in dozens of smaller states and some big ones, too, such as Ohio, Florida, Texas and Pennsylvania.

The main argument for abolishing the Electoral College is that people who voted for the loser in any of these states had no say and figuratively “wasted” their votes. Giving each vote equal weight regardless of where you vote would level the playing field, they say.

An election shouldn’t leave out the smaller states 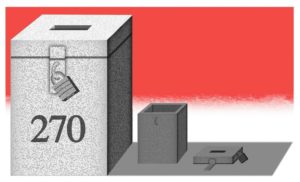 The Electoral College is a bulwark against election fraud. Graphic by Alexander Hunter, The Washington Times

If the election were decided strictly by popular vote, Democrats could ignore all the smaller states and run up the totals in the big, traditionally “progressive” states, plus any Democrat-dominated urban areas. Chicago alone could dig up enough votes in its cemeteries to counter not only the pesky Republican downstate Illinois voters but could also help swing the national total into the D column.

In New York, Project Veritas Action undercover cameras caught Alan Schulkin, the commissioner of the city Board of Elections, at a teachers union party in October admitting that New York City has widespread voter fraud.

“Yeah, they should ask for your ID. I think there is a lot of voter fraud,” Mr. Schulkin said.

There are plenty of good reasons for keeping the Electoral College intact as the Founders intended, and one of the more obvious is that it is a hedge against massive ballot fraud.

Billionaire leftist George Soros has given tens of millions of dollars to radical organizations to conduct get-out-the-vote drives in areas with large populations of illegal immigrants, such as in the Rio Grande Valley of Texas. One Texas Democratic candidate actually posted this on his Facebook page: “Vote Early and Often.”

In Virginia, an investigation revealed that thousands of noncitizens and felons were on the voter rolls prior to Nov. 8. In April, Clinton pal Virginia Gov. Terry McAuliffe tried to give the right to vote to more than 200,000 convicted felons before being smacked down in July by the state Supreme Court. Undeterred, he did a mass “pardoning” of 60,000 felons before the voter registration deadline, sending each ex-con a letter. As Heritage Foundation scholar Hans von Spakovsky noted, “Those who received McAuliffe’s letter also got voter registration forms with prepaid return postage. No others in Virginia received such a service.”

There is no way to know how many of the felons actually voted in the Old Dominion, which went for Hillary by 188,000 votes out of nearly four million cast.

In Pennsylvania’s Lebanon, Perry, Cumberland and Butler counties, some people reported that voting machines had turned their votes for Donald Trump into votes for Mrs. Clinton or their votes for a straight Republican ticket into a straight Democratic ticket. Authorities told news media that some machines had problems and that they fixed them after the complaints and that it was no big deal. Well, maybe.

In Philadelphia and two other suburban counties, an American Civil Rights Union review of the voting records turned up more than 170 people aged 110 or over who had voted in the last few elections. Another recent study revealed that thousands of noncitizens and felons were registered to vote in the City of Brotherly Love.

Given these and other odd happenings, is it any wonder that Democrats want the Electoral College gone and the Republican mantra has become: Win by enough to offset vote fraud in the big cities?

One of the very first things the Trump administration should do is to clear out the radical activists now dominating Obama’s Justice Department. Instead of enforcing the law, they’ve been spearheading the left’s war on immigration enforcement and laws requiring photo IDs and proof of citizenship to register and vote.

It’s time to staff Justice with people who want to prevent vote fraud, not engineer it.

Robert Knight is a senior fellow for the American Civil Rights Union.

Editor’s Note: the appearance of Hillary Clinton winning the popular vote could include three million votes by illegal aliens. If so, Paul Joseph Watson suggests Donald Trump really won the most votes of citizens of the United States.

It would be very hard to get rid of something that does so good.