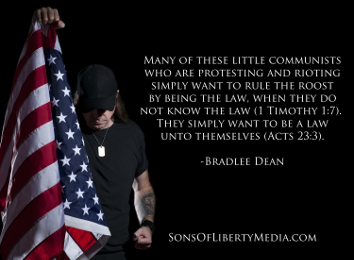 “The ultimate test of a moral society is the kind of world that it leaves to its children.” So said Dietrich Bonhoeffer. This week, young protesters were surrounding police cars in an attempt to free rioters who were being arrested for breaking the law. I know the media backed (bought and paid for) rioting taking place is in many cases the voice of the unheard. Yet that is not what we are dealing with in this country. We are dealing with those who are illegal, unruly and unworthy to even be a part of this country.

A law unto themselves

Many of these little communists simply want to rule the roost by being the law, when they do not know the law (1 Timothy 1:7). They simply want to be a law unto themselves (Acts 23:3).

Furthermore, I have warned that the likes of Barack Hussein Obama, who is continuously adding gas to the fires that he has incited, emulating the tyrant and dictator, Mao Tse-Tung. Mao, in his state of rebellion, overthrew the Republic of China by reaching into the younger generations, and teaching them that they were a democracy, only to take from the have’s and give to the have-nots.

These protesters are the young people who have been given to a federal government to illegally indoctrinate them through No Child Left Behind, Common Core, and international baccalaureate. Seven hundred thousand of these students can’t even read their own diplomas.

The school system from which these protesters have graduated is corrupt from the top to the bottom. The National Education Association has made the young an open prey by subjecting them to everything and protecting them from nothing. Students are given over to caucus to sodomites, as well as a transgender caucus. Furthermore, they are learning false history and science.

These are the protesters that have learned that it is acceptable for government to sanction the murder of the innocent (Proverbs 6:17) by calling it choice, instead of murder.

Once they are done with public school, they can choose a college of their choice to be indoctrinated, and indebted, by a bunch of burnt communists, who are still high on PCP, high enough to call themselves professors (Romans 1:22), while the dumbed down are taught to believe it.

Former Education Secretary under Ronald Reagan said, “In America today, the longer you stay in school, the dumber you get.”

Who made the protesters?

This is all happening because 86% of the American people that call themselves Christians, patriots or conservatives are dropping them off at the front door of a public school that should not exist in the first place (Proverbs 22:6).

All the while, cowardly professors in the church stood down (Psalm 78) because they did not want to judge what God commanded (Isaiah 59:14). They continually strain at the gnat and swallow the big, big camel by removing the Law (Romans 3:20; Galatians 3:24) and teaching a false grace (Galatians 5:13), which ends with hate rather than love (Psalm 109:4, and hell rather than heaven (Psalm 9:16-17); namely, Thou shalt not kill (Deuteronomy 5:17).

Out of their own mouths

The following article was in the editorial section of the Dallas Morning News on Sunday, May 2, 1999:

Generation NEXT Has some Questions

I am a member of the upcoming generation—the one after Generation X that has yet to be given a name. So far, it appears that most people are rallying behind the idea of calling us Generation Next. I believe I know why. The older generations are hoping we will mindlessly assume our place as the “next” in line. That way, they won’t have to explain why my generation has had to experience so much pain and heartache.

“What heartache?” you say. “Don’t you know you have grown up in a time of great prosperity?” Yeah, we know that. Believe me, it has been drilled into our heads since birth. Unfortunately, the pain and hurt I speak of can’t be reconciled with money. You have tried for years to buy us happiness, but it is only temporary. Money isn’t the answer, and it is time for people to begin admitting their guilt for failing my generation. I will admit that I wasn’t planning to write this. I was going to tuck it away in some corner of my mind and fall victim to your whole “next” mentality.

But after the Massacre in Littleton, CO, I realize that as a member of this generation that kills without remorse, I had a duty to challenge all of my elders to explain why they have allowed things to become so bad. Let me tell you this: These questions don’t represent only me but a whole generation that is struggling to grow up and make sense of this world. We all have questions; we all want explanations. People may label us Generation Next, but we are more appropriately Generation “Why?”

Why did most of you lie when you made the vow of “til death do us part”?

Why do you fool yourselves into believing that divorce really is better for the kids in the long run?

Why do so many of you divorced parents spend more time with your new boyfriend or girlfriend than with your own children?

Why did you ever fall victim to the notion that kids are just as well off being raised by a complete stranger at a day care center than by their own mother or father?

Why do you look down on parents who decide to quit work and stay home to raise their children?

Why does the television do the most talking at family meals?

Why is work more important than your own family?

Why is money regarded as more important than relationships?

Why is “quality time” generally no longer than a five-to-10-minute conversation each day?

Why do you try to make up for the lack of time you spend with us by giving us more and more material objects that we really don’t need?

Why does your work (in the form of a cell Phone, laptop computer, etc.), always come with us on vacations?

Why the moral failure?

Why have you neglected to teach us values and morals?

Why haven’t you lived moral lives that we could model our own after?

Why isn’t religion one of the most important words in our household?

Why do you play God when it comes to abortion?

Why don’t you have enough faith in us to teach us abstinence rather than safe sex?

Why do you allow us to watch violent movies but expect us to maintain some type of childlike innocence?

Why do you allow us to spend unlimited amounts of time on the Internet, but still are shocked about our knowledge of how to build bombs?

Why are you so afraid to tell us “no” sometimes?

Why is it so hard for you to realize that school shootings, and other violent juvenile behavior, result from a lack of your attention more than anything else?

Call us Generation Next if you want to, but I think you will be surprised at how we will fail to fit into your neat little category. These questions should, and will, be asked of the generations that have failed us.

Written by Marcy Musgrave, a junior at Texas A&M University.

As a forewarning, you might want to bless this generation while you have time to do so. If you don’t, they will be there to curse you.

The philosophy taught in the class room in one generation will be the taught in government in the next.

This explains what we are dealing with today. I tried to tell you.

Watch the movie, “TRUMBO”. He was a communist believer in the 40s and 50s out of kalifornia. In my opinion, he is the father of the kalifornia communists, which are in office today. His kind has poisoned America,,,,especially our CHILDREN.