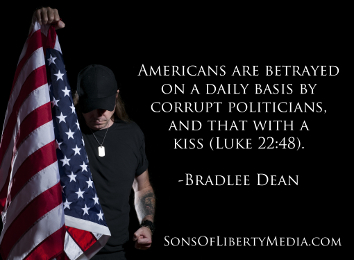 “You can’t get rich in politics unless you are a crook.” So said President Harry S. Truman. Few politicians were as forthright as he in this regard.

The first President of the United States, George Washington, warned long ago concerning those who represent the American people that “few men have the virtue to withstand the highest bidder.”

As we take a look as to what is happening in the arena of politics today, we can see that his warnings have been largely ignored by the people that he was addressing.

Today, Americans are betrayed on a daily basis by corrupt politicians, and that with a kiss (Luke 22:48).

To prove the point, have you ever wondered as to the politicians who are to serve “We the people” enter office with little to nothing and before you know it, they have garnered great wealth? As a matter of fact, 268 of the 534 members are millionaires. One has to ask the question as to who are they working for, especially knowing that their salaries do not match there accumulated wealth.

How is it that America has experienced so much un-godly and un-constitutional change (Proverbs 24:21) over the last 50 years in this country? Yet, we wonder as to why America is being turned into hell (Psalm 9:17).

Perhaps it is because there have been senators in this government that have been serving themselves, as well as special interests groups that have literally been conspiring against the American people for years such as Robert C. Byrd(D-WV). Don’t forget about Daniel K. Inouye who served 49 years, Storm Thurmond 47 years, Edward Kennedy 46 years, Patrick J. Leahy 42 years, and the list goes on and on.

I can just here the media-minded, modern-day conservative say, “This is not right!” or “Where did you get this information from? Go ahead and back it up Bradlee!”

Here is a list of politicians that have admitted that money controls politics.

Money is the mother’s milk of politics.

Where the money comes from

How long this has been going on

Listen to what Daniel Webster said to the American people only to reinforce Presidents George Washington and Harry S. Truman’s statements:

I apprehend no danger to our country from a foreign foe. Our destruction, should it come at all, will be from another quarter. From the inattention of the people to the concerns of their government, from their carelessness and negligence, I must confess that I do apprehend some danger. I fear that they may place too implicit a confidence in their public servants, and fail properly to scrutinize their conduct; that in this way they may be made the dupes of designing men, and become the instruments of their own undoing. Make them intelligent, and they will be vigilant; give them the means of detecting the wrong, and they will apply the remedy.

The Good, Bad and the Righteous

[…] The American Politician: Yes, We Are Corrupt! American politicians: yes, we are corrupt […]

We warned you! - Forefathers of America | Conservative News and Views

[…] The American Politician: Yes, We Are Corrupt! American politicians: yes, we are corrupt […]