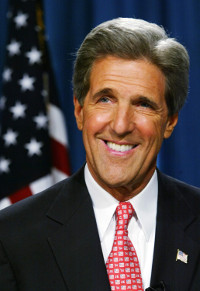 Nothing could have surprised—indeed shocked—the national and international public more than learning through a Boston Globe article by Jennifer Anne Perez on February 2, 2003, that U.S. Senator John Kerry (D-Mass.)—who presented himself as a born-to-the-purple “Boston Brahmin” of Irish-Catholic ancestry—was in fact the grandson of Czech Jews.

Like another Democrat, former Secretary of State Madeleine Albright, Kerry pretended to be shocked! shocked! to learn of his Jewish heritage.

Only when he was outed did this poseur—more known for marrying heiresses then for any legislative accomplishments in his over 30 years as a U.S. senator—admit that, yes, his Eastern European ancestors, surnamed Kohn (a variation of Cohen), were Jews.

But why, after he knew the truth, would he be one of the major architects of a policy to destroy the Jewish state of Israel, as he did with his genocidal speech in the State Department at the end of December?

Of course, the same can be asked of Jews like George Soros, Peter Beinart, and dozens of other Jewish Jew haters who lie awake nights roiling and ruminating over Israel’s success—indeed, its very existence—and feel so distressed by their own Jewishness that they spend their entire lives plotting and planning and spending millions of words and dollars to obliterate Israel, which they no doubt fantasize will kill the Jew inside themselves.

Here’s an ironic twist: Kerry’s younger brother Cameron, an attorney, converted to Judaism in 1983 and has raised his children as Jews.

Getting back to John Kerry, however, we now know that from the very beginning of his public life, he knew he had Jewish roots but lied about them. I think this is called being a liar.

No one has said it better than the founder and editor of The New York Sun, Seth Lipsky:

It looks like Secretary of State Kerry is determined to go out the way he came in—wrapping himself in the flag while betraying the causes of both America and its allies. He came in by doing that to Vietnam and is going out by turning on Israel. 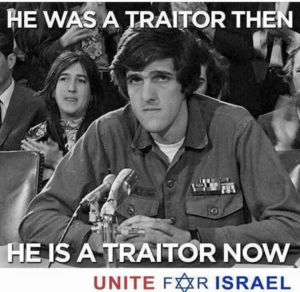 To be sure, if there’s one thing most Americans are certain about it’s that Kerry lied through his teeth when he defamed the heroic soldiers he fought with in Vietnam, accusing them—falsely—of hideous war crimes.

Lipsky explains that, “Kerry’s tirade against Jewish settlements and liberated Judea and Samaria was breathtaking in its mendacity.” And what is the definition of mendacity? Lying!

It’s that very fatal character flaw in Kerry that led the Swift Boat Veterans for Truth to destroy his campaign for president in 2004 when the soldiers who were right they are fighting alongside him convinced the public that he had lied about his record and accumulated medals he didn’t deserve…medals he subsequently threw over a fence in front of the Congress and in utter contempt of his fellow warriors.

John Kerry meets with the enemy

Worse were the accusations of treason that were mounting against Kerry as his accusers cited the 1970 meeting he conducted with North Vietnamese Communists in absolute violation of U.S. law, and other meetings with enemy parties in Paris. According to best-selling author Jerome Corsi, Kerry violated the U.S. code that forbade a U.S. citizen from negotiating with a foreign power.

Kerry was openly advocating that the Communist position was correct and that we were wrong. He had become a spokesman for the Communist Party.

Corsi noted that Kerry’s presidential campaign was “trying to fudge on the issue of meeting with enemy agents…” And what is the definition of fudging? Lying!

Still on the wrong side

And here is Mr. Kerry again, over 45 years later, still on the wrong side. In Vietnam, a noble war fought for the noble cause of stemming the rising tide of worldwide Communism, he slandered both his fellow soldiers and America itself, while today he slanders—and lies about—Israel, our most trusted and stable ally in the tumultuous Middle East.

Mr. Kerry speech [against Israel] is just a transparent attempt at shifting onto Israel blame for his own failures in peace negotiations he should never have entered. 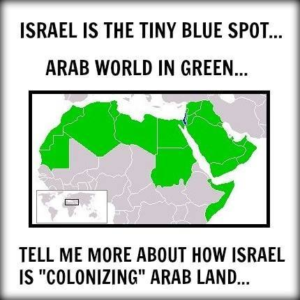 As Wesley Pruden has written, Mr. Kerry “doesn’t come late to the betrayal of friends. He has had considerable practice.” Explaining his betrayal of Israel, Pruden says that like “diplomats before him…he has no permanent friends, only his own permanent interests…like the president, Kerry seems to have been waiting for this moment in time, to stick it to the pesky and resolute Jews who have no taste for the second Holocaust when, as promised by the Iranians, Israel is ‘wiped off the map.’”

Here’s the amazing Brittany Hughes telling John Kerry the difference between right and wrong, a lesson he clearly never learned. And here’s another brief video telling the whole world that this preposterous and anti-Semitic territory dispute is all about.

To shed light on Kerry’s strange attraction to leaders around the globe who have nothing but detestation and loathing for America, it is significant that his 2004 presidential campaign promises were aired on Al Jazeera and that he received—and never rejected—the endorsements of the arch-terrorist Yasser Arafat, the murderous Communist leader of North Korea Kim Jong il, the virulent anti-Semitic and American-hating prime minister of Malaysia Mahathir Mohamad, and the terrorist-appeasing president of Spain Jose Luis Zapatero.

John Kerry knew about 9/11 in advance..and failed to stop it

But that is not where Kerry’s craven nature ends. In 2004, I wrote an article for Newsmax.com, “Kerry & Company’s Homeland Insecurity,” in which I detailed how Sen. Kerry—who sat on both the Foreign Affairs and Select Intelligence committees—was warned for four months before September 11th of a possible terrorist attack at Logan Airport in Boston (from which one of the planes took off that fateful day). The information was given to him by a recently retired special agent with the Federal Aviation Administration (FAA) who had spent over 10 years as a risk-management specialist charged with the security of air traffic control facilities throughout New England.

For three months, Kerry did nothing, finally passing the information to the one agency the FAA agent had warned him was the most remiss in addressing terrorist threats: the Department of Transportation.

Kerry was never called before the self-described “non-partisan” 9/11 Commission, a commission composed of many members with a deep interest—like Kerry’s—in not turning the spotlight on the real suspects in the Clinton administration who for nearly a decade systematically facilitated the encroaching terrorist threat to our nation. In fact, it was Clinton’s FAA that allowed knives with blades less than four inches long to be taken aboard commercial airliners!

This was a very bad thing for America, so it is easy to see why John Kerry said and did nothing to make it less bad.

Kerry voted for every cut! Again…if it’s bad for America, it was overwhelmingly embraced by Kerry!

“Actions have consequences,” journalist Karen Pittman said at the time, in an article entitled, “The CIA’s Plaster Disaster: How Kerry Crippled Intelligence.”

On September 11th, she added,

we paid in blood for the bad choices made under Carter and Clinton, with Kerry’s encouragement. And now he wants you to absolve him. He wants you to pretend you didn’t see him do it.

Americans looking forward to a huge economic recovery, a reconstituted military, protected borders and a robust foreign-policy can thank President elect Donald J. Trump for decimating the Democrat Party, the far-left media, and the credibility of most pollsters, as well as sending both Clintons and creepy flunkies like Kerry into the political wilderness forever.

I suppose that someday someone will have the stomach to analyze John Kerry—a soldier who turned on his fellow soldiers, an American attracted to all things anti-American, a man with Jewish blood who turned on the Jewish homeland.

In his absence, America will be stronger than ever and Israel will survive and continue to flourish. Translated: Mr. Kerry, with all your pretensions and posturing, your thinly disguised anger and hostility, your attempts to excise from yourself the things you hated most—your military status, your American identity, your Jewish blood—you failed!

American politicians: yes, we are corrupt

Without God, Israel is lost