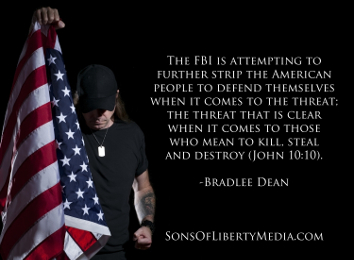 The FBI are, without a doubt, sending the message of selective prosecution.

Things the FBI will not prosecute

Let me just preface this article by saying that I am in no way advocating one crime over another. Any attempt to justify any sort of crime is absolutely ridiculous. The history of my ministry is that I condemn crime, and I always will regardless of who commits it, period (1 John 3:4).

However, I have to ask, what is wrong with people that tolerate the likes of Madonna, who incites a people through her words to “Blow up the White House” yet, go unpunished? Where was the FBI?

Furthermore, how do Americans tolerate people like Linda Sarsour, who led the women’s march in January? Linda Sarsour has ties to Hamas and seeks to overthrow American government by inciting the people to domestic insurrection in order to establish Sharia law. Where was the FBI?

How could Americans look the other way when it comes to the next women’s march organizer, Rasmea Yousef Odeh, a convicted terrorist? Odeh, a Palestinian, was convicted in Israel in 1970 for her part in two terrorist bombings, one of which killed two students while they were shopping for groceries. She spent 10 years in prison for her crimes. She then managed to become a US citizen in 2004 by lying about her past (great detective work, INS: Next time, use Google), but was subsequently convicted in 2014 of immigration fraud for the falsehoods. However, she won the right to a new trial, set for this spring, by claiming she had been suffering from PTSD at the time she lied on her application. Oh, and in her time as a citizen, she worked for a while as an ObamaCare navigator. Where was the FBI?

A clear murder threat – and the FBI would not prosecute

Well, we know that the FBI is missing in action when it comes time to prosecute the crimes of the above said who are advocating crimes against Americans on American soil.

Back in February of 2016, a Muslim NHL player threatened to slit the throat of an opposing player.

Read his lips. Nazem Kadri threatened to murder Mark Giordano. Certainly, he was caught up in the heat of the moment and isn’t really going to kill him. But as a Muslim, his cultural frame of reference is interesting. When you grow up hearing “When you meet the unbelievers, strike the necks” (Qur’an 47:4) and that sort of thing, even if you’re not all that devout yourself, it’s just possible that it might be in the back of your mind.

The 25-year-old Kadri was disciplined for the same gesture while playing for Canada in a game against Switzerland at the 2010 world junior hockey championship. Yet, he drew a mere reprimand.

Why hasn’t the FBI intervened when it comes to re-educating students in public schools in America?

What are they teaching? Just ask the Muslims who are getting a pass when it comes to teaching ….

When the FBI will prosecute

A Minnesota man, who mailed a bomb threat to a mosque under construction in his Minneapolis neighborhood in 2015, was sentenced Wednesday to one year in federal prison.

Fisher confessed to sending the letter after the FBI traced fingerprints he left on the note last year.

Fisher told agents he wanted the staff at the Islamic center, which primarily serves the Twin Cities’ large Oromo population, to think that anyone could have sent the note. That note threatened to “blow up your building with all you immigrants in it.”

My office takes very seriously any threat of violence against an individual or their place of worship based on race, religion or cultural practices.

Meaning they will protect those who are here to overthrow American government, which Sharia law mandates. Furthermore, we will not tolerate anyone who would seek to defend themselves against the enemies within.

If we are practicing Muslims, we are above the Law of the land. – Mustafa Carroll Director CAIR Texas

Islam isn’t in America to be equal to any other faith, but to become dominant. The Koran, the Muslim book of scripture, should be the highest authority in America, and Islam the only accepted religion on earth.” – Omar Ahmad, Founder of the Council on American-Islamic Relations (CAIR)

We will continue to work closely with the FBI to prosecute these types of crimes, which threaten religious freedoms and violate fundamental civil rights.

Apparently, the FBI are selectively picking whom they wish to prosecute.