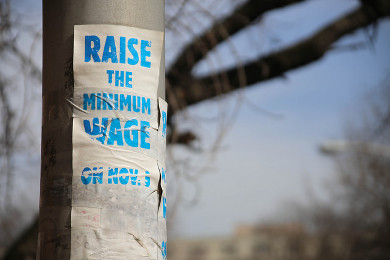 Obama, the humanitarian huckster-in-chief, weakened the United States borders for eight years presenting his crippling policies as altruistic when in fact they were designed for destruction. His legacy, the Leftist Democratic Party with its “resistance” movement, is the party of the Humanitarian Hoax attempting to destroy American democracy and replace it with socialism.

Raising the minimum wage has been an anthem for the leftist Democratic Party. They rail against the “heartless” Republicans for not caring and having loving kindness for the little people. The Leftist insist the 99% are being victimized by the ruthless 1%. So let’s examine the subjective reality of leftist fiction being propagated by these humanitarian hucksters.

Raising the minimum wage to $13 or $15 is a great sound bite repeated incessantly by the colluding mainstream media for the hucksters. In objective reality raising the minimum wage to the $13 or $15 threshold has resulted in devastating consequences for the poorest working Americans. Instead of working a full-time 40 hour week the workers’ hours were reduced to a part-time 20 hour week and their benefits were reduced accordingly.

The humanitarian hucksters are not stupid – they are just deceitful. They knew the outcome because there are many educated economists among them who know that businesses that cannot sustain the wage increase will reduce hours to keep their businesses open. So why would the leftist humanitarian hucksters deliberately make such a destructive demand?

The answer is that the goal of the leftist Democratic Party is to destroy American democracy and replace it with socialism. The leftists already know that unsustainable wage increases that result in reduced hours also result in increased welfare roles that will overwhelm the system and devastate the economy. Obama’s mentor radical socialist Saul Alinsky hoped to change American democracy into socialism in the 1970s.

Alinsky’s Columbia University protégés Richard Cloward and Frances Piven devised the strategy to deliberately overload the US welfare system in order to precipitate a crisis that would lead to “a replacement of the welfare system with a national guaranteed annual income and thus end poverty.” The problem is that the guaranteed annual income is guaranteed to collapse the economy and increase poverty. As Margaret Thatcher so succinctly remarked, “Socialism cannot work – eventually you run out of other peoples’ money.” Demanding the unsustainable raise in the minimum wage was a humanitarian hoax.

What is essential to understand is that socialism may have been the end game for the left-wing liberal lemmings determined to replace American democracy with socialism – but it was never the end game of the globalist elite who actually have the power and intend to rule the world with their own new world order of one-world government.

The Leftist Democratic Party and their leaders are the useful idiots being used by the globalist elite (monarchs, aristocrats, royalty, world bankers, and industrialists) to transform America into socialism. The Leftists are too arrogant to understand that they are participating in their own destruction. They have been indoctrinated to believe that they are fighting for “social justice and income equality” when in fact they are helping to establish the dystopian nightmare of one-world government where there is no middle class, no upward mobility, no national sovereignty, and no individual freedoms. There is only the ruling globalist elite and the enslaved population who serve them.

America stands in the way

One-world government is the goal and the underlying motive of the campaign to destroy America from within. American democracy is the single greatest existential threat to one-world government and President Donald Trump is America’s leader. If the globalist elite are successful in their efforts to weaken the US military, create social chaos through open borders and illegal immigration, collapse the economy through an unsustainable minimum wage, overthrow the US government of President Donald Trump, and transform America into socialism the next step is globalist conquest and the imposition of one-world government.

After 241 years of American freedom the world will be returned to the dystopian existence of masters and slaves because a willfully blind American public was seduced by leftist humanitarian hucksters promising kind social justice and compassionate income equality to surrender their sovereign borders and freedoms by demanding unsustainable economic benefits without commensurate work. The Humanitarian Hoax will have succeeded in killing America with “kindness.”

Editor’s Note: this is the third in the Humanitarian Hoax series. See also the first and second articles.

Humanitarian hoax at the border

The Problem With Capitalism | Conservative News and Views