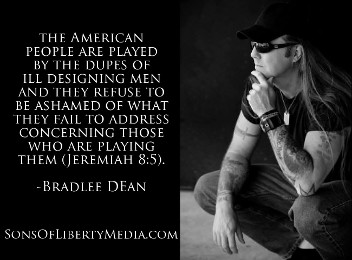 “Make the lie big, make it simple, keep saying it, and eventually they will believe it.” So said Adolf Hitler and his propaganda minister.

Over and over again, the American people are played by the dupes of ill designing men and they refuse to be ashamed of what they fail to address concerning those who are playing them (Jeremiah 8:5).

Case in point, this last week I posted a meme on my live stream that showed the tyrant Adolph Hitler taking pictures with children to win the people over, as well as a picture of him as Time Magazine’s 1938 “Man of the Year.”

A man responded, “I am tired of people equating Adolph Hitler with Donald Trump.”

“I never said anything about Donald Trump! You did!” I replied. “Did you see something that I may have overlooked?” (2 Corinthians 11:14)

We all have something to learn.

I have been posting these memes for years and now that Donald Trump is president, I am equating him to Adolph Hitler?

Look at what Louise Solmitz, a Hamburg school teacher in 1932, said of Adolph Hitler.

How many look up to him with touching faith as their helper, their savior, their deliverer from unbearable stress.

I went on and said that regardless of who serves “We the people” in this country, we are to, like the good advice given by Patrick Henry,

Guard with jealous attention the public liberty. Suspect everyone who approaches that jewel.

So, I lay to the feet of present day America that you look to the past that you might know, through the Scriptures, the future that lies in front of us.

Are We as Asleep as the Germans of the 30’s?

Politicians brought the Nazis to power and started the war. They are the ones who brought about these disgusting crimes. – Karl Doenitz, German admiral and would-be führer after Hitler

On Nov. 20, 1945, the Nuremberg Trials began, bringing Hitler’s Nazi criminals to justice. By this time, several countries were destroyed, and 50 million people, 2.5 percent of the world’s population, lost their lives – including 12 million Jews, German dissidents, political opposition, intellectuals and others who were exterminated in Nazi concentration camps.

The world watched in horror as in the courtroom filled with Nazi criminals was played video footage of famished men, women and children who were mercilessly shot, starved and/or tortured, and then thrown carelessly into mass graves, all because they did not fall in line with the ideology of Adolf Hitler.

During the opening of the court proceedings, it is important to note that the prosecutor said,

The laws of God and man have been violated, and the guilty must not go unpunished.

Just imagine if the Nuremberg Trials, per se, would have taken place at the first unconstitutional acts of Hitler’s wicked regime. Hitler could have easily been stopped in the 1920s with relative ease by the German people who still had the freedom to do the right thing, and did it not.

Instead, they acted as if Adolf Hitler had nothing to do with their personal lives.

Friends, as no one took Mussolini, Mao or Stalin seriously at first, many fellow Germans thought Hitler was an average run-of-the-mill wacko who posed no threat.

Horrifically, they were dead wrong. 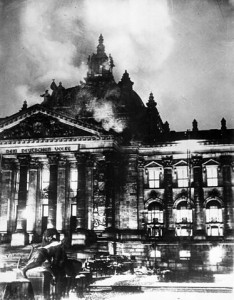 One of Hitler’s first moves when he rose to power was to attack his own Reichstag, only to blame it on his political opposition. He then proceeded to eradicate the Constitution of Germany in only six years.

Hitler no longer abided by the law, but instead promulgated his agenda by force.

Where were the 80 million people in Germany to stand up against this monster?

As Karl Doenitz blurted out, it was the politicians (and the people) who were responsible for bringing the Nazis to power.

On a daily basis the crimes of Hitler and his regime were evident. So obvious were the atrocities that after church the Germans were wiping the ashes of the incinerated victims off their cars.

Their lack of action turned them from victims to accomplices.

What does this have to do with America today?

It is clear to see that over the last four administrations, America’s government is emulating many similarities – likewise setting itself at war with God, abusing power and trampling on the Constitution.

Where are the 312 million (323.1 million in the present) Americans to stand up and magnify the laws of our republic?

Have Americans today forgotten the price of their blood-bought freedoms, paid for by hundreds of thousands of veterans who laid down their lives, fortunes and sacred honor?

In the 1800s, after much bloodshed through the Civil War, President Andrew Johnson made one wrong move, causing him to be tried for impeachment.

Johnson simply removed the secretary of war from office without the consent of Congress. Americans were so jealous over their liberties they would not tolerate the least offense.

It would do us well to follow in our forefathers’ footsteps, lest we, like
Germany, become accomplices to America’s overthrow through our apathy and lack of repentance – to our own demise.

As it says on the Supreme Court Building, “Justice (is) the guardian of liberty,” right under Moses holding the Ten Commandments. We must follow the preamble of our Constitution and “establish justice” (Isaiah 51) in order to “secure the blessings of liberty to ourselves and our posterity.”