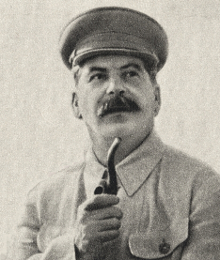 On Tuesday, American voters will once again go to the polls hoping that the candidate(s) they vote for will fulfill what should be their one and only mission, i.e., to serve the needs of We the People. Republican, ahem, leaders are appropriately nervous that the phony so-called conservatives they’ve been foisting on us for decades will be replaced by authentic conservatives who will help President Trump fulfill his mission to Make America Great Again! And—oxymoron here—Democrat leaders are even more agitated because looming over the entire election will be the initiative President Trump announced last May to investigate voter fraud, an issue they are all-too-seedily familiar with. 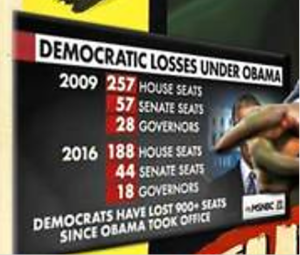 They are also in high anxiety about the inconvenient truth that, according to journalist Susan Jones, “There have been five special congressional elections so far this year, and in the four races where Republicans ran against Democrats, Republicans have won all four.” (In CA, two Democrats vied for a House seat, so a Dem win was the only possible outcome).

The far-left Washington Post called his appointment “divisive,” which to most Americans meant that the president picked the perfect guy. In 2005, von Spakovsky led the Justice Department’s approval of a Georgia law requiring voters to produce photo ID, which was rejected! 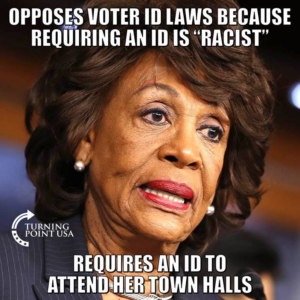 Think about that rejection. You need a photo identification card to get a driver’s license, donate your blood, buy alcohol or cigarettes, open a bank account, apply for welfare benefits or food stamps or Medicaid or Social Security or unemployment or a mortgage or a hunting and fishing license, get on an airplane, rent a car, get a prescription, buy a cell phone, visit a casino and get married—and that is the short list!

But the initiative was rejected because Democrats object to any requirement that would prevent illegals and dead people and cartoon characters from voting and potentially swinging an election in their favor. 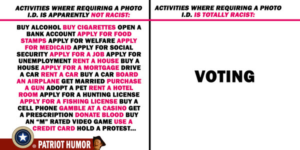 What do you think Sanctuary cities are all about? They are certainly not about the deep love and empathy leftists have for humanity, or the preference people who work 12 or 16 or 20 hours a day have for giving total strangers free housing, education, healthcare, and ongoing stipends into perpetuity. No no no….sanctuary citizens are all about Democrat votes!

Sure enough, the reliably cringe-producing Senator Chuck Schumer (D-NY) called on the president to reject the embrace of “white supremacy” and the desire to “disenfranchise” voters that motivated such a commission.

And predictably, as reported by freedom-fighter Pamela Geller—author of the sensational new autobiographical book, Fatwa: Hunted in America—the president’s Voter Fraud Commission faced an avalanche of lawsuits. “But peel back the layers…[and] a common denominator emerges—they’re heavily funded by groups tied to George Soros. In fact, the more groups that pile on the suit, the more the dark hand of Soros emerges.”

It is also no surprise that the most corrupt regime in modern American politics—that of the poseur “president” Barack Obama—elevated voter fraud to an art form. As Thomas Lifson of AmericanThinker.com has reported, “One of the most outrageous abuses of the Obama presidency was a scheme by which fines for corporate misbehavior by the biggest Wall Street banks were channeled into the hands of radical leftist groups that are now vehemently opposing the policies of President Trump. We are talking hundreds of millions of dollars that ought to have gone to the federal treasury, but instead became a slush fund for the left.”

Or as journalist and best-selling author Paul Sperry writes in the New York Post: “An estimated $640 million has been diverted into what critics say is an improper, if not unconstitutional, ‘slush fund’ fed from government settlements with JPMorgan Chase and Co., Citigroup Inc. and Bank of America Corp., according to congressional sources.”

No need to discuss the way that Ms. Hillary rigged the Democratic primary in New York against Senator Bernie Sanders (I-VT) until we learn if, indeed, Leavenworth lies in her future.

Clearly, the Democrats/progressives/liberals/leftists/socialists/communists/jihadists among us have zero trust or faith in the free-and-fair votes cast by citizens across our country, hence the desperate need to rig elections.

The New York Times rated Hillary’s chances at 93%. The Huffington Post raised that to 98%. That was still too modest for Obama campaign manager David Plouffe who predicted a 100% likelihood of Hillary winning. It wasn’t strategy or statistics that made the Dems think that victory was certain. It was ideology.

they had confused ideology with electability [and] human beings don’t react well to having their egomaniacal fantasies come apart around them.

And there is one more thing. Democrats felt confident that they had perfected the voter-fraud scheme so exquisitely that their girl Hillary would cakewalk her way into the Oval Office in a landslide. But the one thing they didn’t count on—and haven’t counted on for four elections in which they’ve sustained thunderous losses in state legislatures, governorships, congressional and senatorial seats and, in 2016, the White House—is the preference of most Americans for sane policies that don’t include:

You get the picture.

The epidemic of voter fraud

I’ve heard of some cases of Republican gerrymandering. According to Wikipedia, this is “a practice intended to establish a political advantage for a particular party or group by manipulating district boundaries.” Not really sure how this works, but it pales by light years from the countless examples of Democrat voter fraud. For one thing, gerrymandering is legal, although it can be contested.

Shortly after President Trump’s commission was formed, stories of Democrat voter fraud from all over the country started to emerge. Of course, most of the fake-news liberal media refused to cover these stories, just as they—including the far-left New York Times—kept buried the story of Miramax founder Harvey Weinstein’s predatory sexual harassment and alleged rape for nearly 15 years, the better to protect a huge financial donor to Democrat candidates.

Here is a small sampling of the kind of voter fraud that is perfectly routine in Democrat circles:

All of the above cases, from just the past few months, involve Democrat voter fraud and this is the teeniest tiniest tip of the iceberg!

The group was finally outed in 2009 by conservative activists Hannah Giles and James O’Keefe who used hidden cameras to expose ACORN’s nefarious agenda. The U.S. Congress cut ACORN’s funding and the group eventually disbanded. But it continues to operate to this day under new names.

According to journalist and author Matthew Vadum, “Project Vote—the voter mobilization division of now-defunct ACORN—leaves behind a legacy of lies, criminal conspiracies, and voter fraud, including millions upon millions of fraudulent voter registrations.” As he documented in his book, Subversion Inc.: How Obama’s ACORN Red Shirts Are Still Terrorizing and Ripping Off American Taxpayers, “at least 54 ACORN employees and individuals associated with ACORN have been convicted of voter fraud, a blanket term coined by lawyers referring to fraudulent voting, identify fraud, perjury, voter registration fraud, forgery, and other crimes related to the electoral process.”

Grimes and Barth report the massive election fraud that took place during the California primary in June (2016).

Going back to the fiasco of the 2012 presidential election and liberals’ aversion to voter identification cards, Rev. Austin Miles writes: 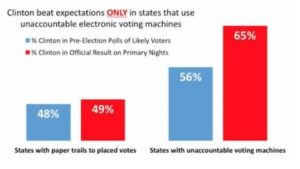 Barth cites a study on Democrat fraud in multiple states, the conclusion of which was that voter fraud [occurred] and benefited Hillary Clinton – especially in states that used unaccountable, electronic voting machines.

“What’s more, two of the three companies that controlled the electronic voting machine market, Dominion Voting and H.I.G. Capital (i.e. Hart Intercivic) were on the list of big money donors that donated to the Clinton campaign, as shown by the DNC documents leaked by Guccifer 2.0.”

These stories were nowhere to be found in the mainstream media. Neither was the video—since removed—of a Diebold machine spitting out incorrect votes in favor of Hillary.

In addition, according to Dean Garrison at dcclothesline.com, not only did Reuters rig a major poll to show Hillary winning when Breitbart News was reporting a 17-point swing towards Trump and away from Hillary, but Thomas Reuters, owner of the Reuters News Service, was among the top-tier donors ($1.5 million) to the Clinton Foundation!

It is impossible not to mention the famous “popular vote” that Hillary insisted she won by. Actually, in October of 2015, just a year before the presidential election—perfect timing—a motor-voter law cooked up by California Governor Jerry Brown was enacted. In short, this gave over three-million illegal aliens the “right” to vote.

A report from Investors Business Daily said that: “According to the American Civil Liberties Union—which opposes the motor-voter law—California houses 3.3 million illegals, or a quarter of the nation’s total. So the stage is set not just for extending voting to illegals but for swinging national elections, too.” 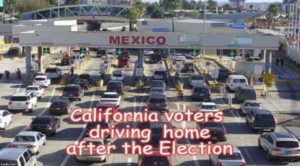 Well whaddaya know? That number—3.3 million— is just about the exact number Hillary and her bitter minions—and her pathetic book—say she won the popular vote by!

We all know how this massive voter-fraud attempt ended. Donald Trump not only won the 2016 election, but successfully exposed the fake news and fake polls that until 8 p.m. on election night continued to insist that Hillary was ahead and would win.

They never ever counted on the one entity for which neither media hacks nor pollsters have any respect: the American public!

To this day, in their profound denial of the outcome of November 2016’s election, Democrats/leftists/progressives—whatever they’re calling themselves these days—are living in the past, denying there’s a new sheriff in town, and railing against the president’s voter fraud commission as if individual or collective temper tantrums by the media or staged bought-and-paid-for demonstrations can undo reality.

Walter Murray of The Horn News, understands this species. “If you can’t win by the rules… change the rules!” he writes. “Crazy? Maybe—but no one has ever accused the far left of being sane when it comes to their plans to seize power, gain control and skew elections.”

One of their desperate schemes, he reports, is “to undermine the electoral process” by using the courts…to forever change presidential elections by doing a complete end run around the Electoral College. He says that liberal Harvard Law School Professor Lawrence Lessig “intends to file lawsuits in 48 of 50 states” to do away with the Electoral College.

“With a winner-take-all, most of America is ignored,” Lessig told Fox News. Murray adds: “By `most of America,’ of course, he means California and New York.” Oh, and Lessig would also like to “disenfranchise older white Americans, who tend to vote Republican.”

But leaving a number of fringe ideologies behind, things are already happening as a result of the president’s commission:

This is what happens when a leader is perceived as a “man of his word.”

We should know by Tuesday’s vote if there has been compliance—and, if not, what the consequences will be.

Still, huge challenges remain. A couple of months ago, computer experts told Pres. Trump’s Voter Fraud Commission that the country’s voting machines are susceptible to hacking, which could be done in a way so that it leaves no fingerprints, making it impossible to know whether the outcome was changed.

“There’s no perfect security; there’s only degrees of insecurity,” said Ronald Rivest, a professor at the Massachusetts Institute of Technology.

And here is an irrefutable truism about Democrat voters from an unknown source: “It’s worth noting that the U.S. population has increased since 2012, meaning there are likely more dead and invalid voters than before.”

Joan Swirsky is a New York-based journalist and author who can be reached at joanswirsky@gmail.com. Her website is www.joanswirsky.com.

Jewish State? Not so much