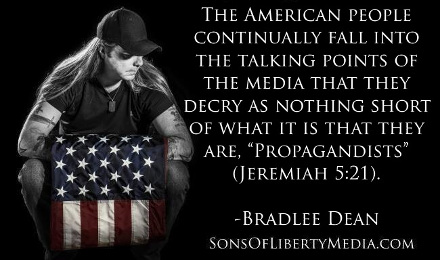 “All propaganda has to be popular and has to accommodate itself to the comprehension of the least intelligent of those whom it seeks to reach.” So says the infamous Saul Alinsky. In that vein: Breitbart recently reported that former President Barack Obama took the title of Most Admired Man for the tenth consecutive year in a row, and former first lady and secretary of state Hillary Clinton is the Most Admired Woman for the 15th consecutive year in a row, according to a Gallup poll.

This is clearly nothing short of propaganda.

derogatory information, especially of a biased or misleading nature, used to promote or publicize a particular political cause or point of view.

Propaganda, in this case, is an attempt to cause the readers to believe that they have the support of the masses, which they do not.

“Power is not only what you have, but what the enemy thinks you have.” – Saul Alinsky, “Rules for Radicals: A Practical Primer for Realistic Radicals,” p. 126

And he is the most admired man in America, according to this report? No one knows who he is except for what they have seen him do and it is not admirable in any sense of the word. Just think Americans, he campaigned on transparency (2 Corinthian 11:14-15).

I reported on August 18, 2014, that CNN’s president resigned last year due to the low viewership it received. Maybe this will shed some light as to why he resigned: Amber Lyon, former news anchor for CNN, said she was ordered to report fake stories, delete unfriendly stories adverse to the Obama administration and construct stories in specific manners while working for the left-wing network. Lyon said CNN is paid by U.S. and foreign governments for reporting on some events and not reporting on others. She also stated that the Obama administration pays for CNN content.

The New York Times actually blurted out the truth in their confusion (to their credit, I might add) that all information coming out of the Obama administration is first vetted.

Or what about MSNBC? I’m sorry I even have to bring them into the equation, but their slogan during the election campaign happened to be “Lean Forward,” which is directly derived from the communist playbook. MSNBC parades people like radical lesbian Rachel Maddow, the shameful uncivil rights want-to-be leader Al Sharpton and Chris “It’s a terrible place to be when your brains are in someone else’s head” Matthews.

Nothing could be further from the truth!

Don’t you remember that in the 2010 elections, 63 Democratic representatives were unseated?

Did you forget that during the re-election inauguration there weren’t even enough people in Washington, D.C. to fill up the hotel rooms?

And of course, you surely haven’t forgotten the massive voter fraud that took place in the United States in the last election.

Where Obama gets his support

Who supported Barrack Hussein Obama then? Well, the homosexuals do for one, who make up less than 1.7 percent of the population – the very ones who are being used as a political battering ram only to make way for Shariah law (They just haven’t realized that yet).

Planned Parenthood supports him, only to be used as a political battering ram to eradicate human life under the guise of “choice” (Which in truth is population control).

Without the United States, countries like Cuba, Venezuela, China, Russia, the Muslim Brotherhood, etc. have expressed their support for Obama as well.

Furthermore, why are the illegals so important to Obama if he has all that support?

The Gallup poll, which has been conducted every year since 1946, asked respondents to name their top two picks for most admired man and woman.

For the woman, it again was reported that Hillary Clinton topped the list for Most Admired Woman — a title she has held onto for the past 15 years.

However, Gallup notes that she may not hold onto this title in future years because her polling numbers were at their lowest in 15 years and are unlikely to improve as her political career is “likely over.”

Where did all of that support come from to support those polls America?

I’ll tell you, out from the offices of the propagandists.

What has been reported concerning this poll and what the facts truly are, are in stark contrast to what we found.

Even more telling was that when Clinton was in her position as Secretary of State, the Associated Press reportedthat the State Department was buying Facebook “likes.”

In 2013, the State Department, which has more than 400,000 likes and was recently most popular in Cairo, said it would stop buying Facebook fans after its inspector general criticized the agency for spending $630,000 to boost the numbers. In one case, its fan tally rose from about 10,000 to more than 2.5 million.

But that isn’t all. When Hillary opened up her campaign in Iowa, there were actually more reporters who attended than voters.

Gone are the soaring speeches and the big rally crowds, swapped out for roundtable discussions and meet-and-greets with local activists.

But the dozens of reporters both in the room and chasing after her van outside were a reminder of just how difficult it will be for one of the most recognizable public figures in the world to hold events that truly feel intimate.

On Tuesday, for example, Clinton was seated at a table with just seven other people for the discussion, with an audience of another 15. But those Iowans were far outnumbered by the dozens of reporters who were bunched together behind a thin yellow rope at the back of the room.

Indeed, despite some limits on the number of press credentials handed out by Clinton’s Iowa team—each outlet had one person in the room, and national television and photography was pooled—it still was a big group. Bigger yet was the press crowd outside, where reporters who weren’t admitted to the event chased Clinton’s van when it first pulled up here, contributing to the feeling of a media circus surrounding the former Secretary of State’s Iowa launch.

Clinton joked about the horde of reporters as the event opened, telling the seven-roundtable participants: “Well, thank you for having me here—and a few of my friends.”

However, as The Daily Mail reports:

According to two popular online measuring tools, no more than 44 percent of her Twitter fan base consists of real people who are active in using the social media platform. And at least 15 percent – more than 544,000 – are completely fake.

Brazenly and shamelessly it was reported that former first lady Michelle Obama took the runner-up slot, with seven percent of the vote, while Oprah Winfrey took third place with four percent. Gallup surveyed 1,049 adults fromDecember 4–11 with a four percent margin of error.

It absolutely amazes me that the American people continually fall into the talking points of the media that they decry as nothing short of what it is that they are, “Propagandists” (Jeremiah 5:21).

Most admired? Here we go again | Conservative News and Views