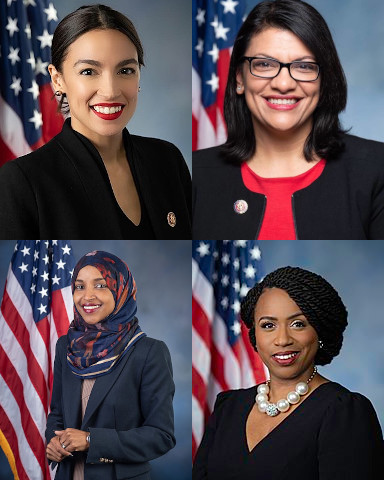 “There are no morals in politics; there is only expedience. A scoundrel may be of use to us just because he is a scoundrel.” – Vladimir Lenin

Here we go again, the mainstream media, in hopes that you will buy another one of their lies, have proclaimed that Michelle Obama is the most admired person in America while at the same time other propagandists like Time Magazine are simultaneously promoting Alexandria Ocasio-Cortez, Ilhan Omar, etc… Can you make this up?

This is nothing more than the globalists casting into your minds the “lowest of the people” (1 Kings 13:33) to further drive the standard down in hopes that the people at large will accept that to which they would have you submit.

They are also attempting to push on the unlearned that the masses are in support of these people when the opposite is true (Isaiah 5:20).

These globalists and propagandists love to praise their own (John 15:19) by highly esteeming their “Useful Idiots,” which are nothing short of an abomination in the sight of the living God (Luke 16:15).

Most admired indeed: we’ve been over this before

All propaganda has to be popular and has to accommodate itself to the comprehension of the least intelligent of those whom it seeks to reach.

This is clearly nothing short of lies and propaganda by their controlled spin-doctors.

prop·a·gan·da \präpəˈɡandə\, n.: derogatory information, especially of a biased or misleading nature, used to promote or publicize a particular political cause or point of view.

Propaganda, in this case, is an attempt to cause the readers to believe that they have the support of the masses, which they do not.

Look at how Time Magazine has in the past put up the unthinkables to push forward their agenda, and learn this time around that prevention is far better than the cure.

Matot: Great is Vengeance Because It Appears Between Two Names of God

The Humanitarian Hoax of the 2019-2020 Equality Act: Killing America With Kindness – hoax 41