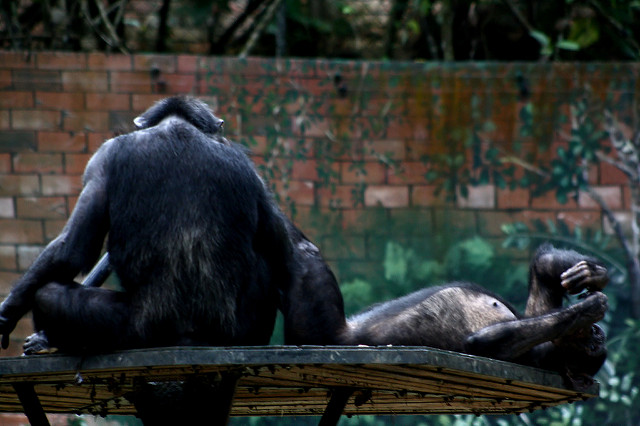 The Descent of Man is the ambiguous title of Darwin’s sequel to The Origin of Species. Of course, it was not ambiguous to Darwin, who simply meant that man is descended from apes. But the title may nonetheless be construed to mean that man has descended to the level of apes – as witness the Left’s reaction to the election of Donald Trump!

Consider the Great Ape Project reported some years ago in The New York Times. The project was based on the findings of microbiologists that certain apes possess 95 percent to 98.7 percent of the DNA of humans. The directors of the Great Ape Project, Peter Singer, a Princeton ethicist, and Paolo Cavalierro, an Italian philosopher, regard apes as part of a “community of equals” with humans. The conclusion appealed to left-wing academics.

Consistent with this astonishing conclusion, a committee of the Spanish parliament recently voted to grant limited rights to our closest biological relatives – chimpanzees, bonobos, gorillas, and orangutans. Why not, seeing that the genomes of these apes are only a snippet less than that of humans?

The directors of the Great Ape Project and their Spanish disciples obviously regard apes and humans as essentially biological organisms. Apparently, they do not regard the minuscule aspect of DNA that differentiates humans from apes as having fundamental significance. Perhaps this minute aspect of DNA is related to a spiritual aspect of man, one that has prompted homo sapiens to believe that man is created in the image of God?

On the other hand, if chimpanzees could only speak, perhaps they would tell us that they too are created in the image of God? Of course, if they could speak as well as Richard Dawkins, a world famous atheist, perhaps they would say there is no god, and thereby win the demotic support?

What rights should apes have?

Be this as it may, if chimpanzees, bonobos, gorillas, and orangutans are to be accorded many of the rights of humans, which rights should they be granted? If it were up to Richard Dawkins, he would obviously exclude the right to freedom of religion. This would not disturb the atheists ensconced in the Spanish parliament. But what about endowing apes with the right to bear arms or to live wherever they please?

Like Spanish politicians, Mr. Donald G. McNeil Jr., writing in The New York Times, admits there should be some limits to the rights granted apes. But like the directors of the Great Ape Project, he thinks this project marks an important advance in civilization. He did not come to this conclusion by visiting Israel’s cacophonic Knesset, but by a stay in a Cameroon jungle. There he learned that Darwin was right: man is indeed descended from apes, from which he concluded – in the spirit of our democratic age – that endowing apes with human rights agrees well with the democratic principle of equality. What could be more indicative of the ascent of man?

Author Mark Steyn disagrees. Judging from what he says about Spain and its benign law project regarding apes, Steyn would have us believe that the Great Ape Project marks the descent of man, that is, of man’s descent to the level of chimpanzees or orangutans. Steyn’s position confirms what I said about the ambiguous title of Darwin’s second-mentioned book.

The disappearing of Spain

Be this as it may, I find it strange that Spain, of all countries, should look with favor on the Great Ape Project. After all, not only is Spain a Catholic country, but it also has one of the most aristocratic traditions, whereas the Great Ape Project is nothing if it is not the epitome of democratic egalitarianism.

Unsurprisingly, the fertility rate in Spain is only 1.1 percent. Apparently, 2.1 percent of live births per woman is necessary for a stable population: no growth and no decline. Spain, like other European nations, may disappear within a few generations. No doubt there are other causes; but why should women want to bear children who are only 2 or 3 percent from being orangutans?☼

The native population of Spain and of other European nations is being replaced by Muslims, who do not regard non-Muslims as human or as worthy of human rights. Thus, in 1985, Said Raja’i-Khorassani, the permanent delegate to the United Nations from the Islamic Republic of Iran, reportedly declared that “the very concept of human rights was ‘a Judeo-Christian invention’ and inadmissible in Islam.”

Since Islam’s rejection of human rights derives from its tacit denial of the Biblical concept of man’s creation in the image of God, apes will surely be deprived of the rights accorded them by the Spanish government. A Muslim may then speak of the ascent of man in Spain, since the Quran regards non-Muslims as apes…

Related Topics:islampoliticiansscientific theory
Up Next

The deadly nature of Islam

[…] A diligent pulpit would also advocate consistently for creation. Not just “creation” in the abstract but young earth creation. That the most violent event this world has ever known, took place 5300 years ago (give or take a hundred), none would dispute. Nor would anyone dare suggest that humans were no better than fish—or apes. […]