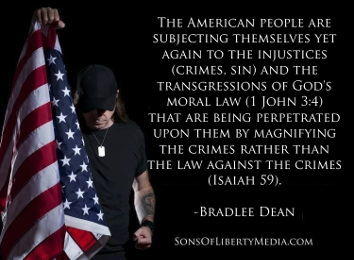 Chaos comes from lack of order and respect for order

The American people are subjecting themselves yet again to the injustices (crimes, sin) and the transgressions of God’s moral law (1 John 3:4) that are being perpetrated upon them by magnifying the crimes rather than the law against the crimes (Isaiah 59).

Police, who are to enforce the law against crimes, have on their cars “Peace officers.” (Matthew 5:9).

Yet, no matter how many times nor how many different ways I go back to the Word of God and show the American people the answer to the injustices taking place and how the law applies to ALL of us, regardless of the capacities in which we are occupied, for some reason or another, and without fail, people will always fall back into the old cycle of talking about the branches (lawlessness-injustices) on the tree rather than laying the axe to the root of the tree (bringing about judgment to establish peace) and taking it down (Luke 3:9).

Chaos, how could it be otherwise, Americans? (Jeremiah 6:6)

The God of order and the “god” of chaos

First things first. The very first Scripture in the Satanic Bible is “Do what thou wilt shall be the whole of the law.” – Aleister Crowley, Satanic priest

Yet, God commands otherwise! Thou shalt not! Not because He hates, but because He loves (Exodus 20; Psalm 19:11; Galatians 3:24). It is always wise for us to do what God commands for our own good (Deuteronomy 4:6).

God gave His law because He loves, and we know that love is the fulfilling of the Law (Romans 13:8-14). Love does not allow the sin (crime) upon yourself or against your neighbors (Leviticus 19:17).

When you live in a country where 78% of the people profess to be believers (Christians), and looking around at what is seen in America today, one can only come to the realization that they do not really believe their own message (1 John 2:4).

These “unbelievers” are guilty before the Judge of all the earth, and have ignorantly advocated that which God clearly condemns (Micah 3:5; John 7:7).

They destroy moral law, which Jesus magnified, through omission and ignorance and call it grace, which in truth is not true grace at all (Matthew 5:17).

Furthermore, the American Church believes that it is somehow the mercy of God to allow corruption to reign in the place of justice and judgment (Jeremiah 9:24; Psalm 9:16, 89:14, 97:2) when the opposite is true. What is the fruit? The fruit is a “feigned” or “counterfeit” compassion for the criminal rather than the victims themselves (1 Peter 1:22).

And the people then stand back in apathy and wonder why “…judgment is turned away backward, and justice standeth afar off…” (Isaiah 59:14)

Grace is defined, in part, as unmerited favor. Yet, in keeping with the heart of the Gospel, those that are forgiven much also love much! With their eyes on the cross of Calvary (Galatians 3:1), those that truly love the Lord understand the price paid for their redemption. Upon comprehension, they will then live for Him who died for them (2 Corinthians 5:15) and will tolerate nothing which offends.

If their message is true to Scripture, why then is sin abounding over the Scriptural grace that is to abound over sin?

“But where sin abounded, grace abounded much more.” -Romans 5:20

Where is the grace?

Chaos, how could it be otherwise?

Where representatives of the American people have taken on the position of the employer rather than the employee, while tearing down the U.S. Constitution and its enumerated laws rather than upholding them as they swore an oath to do so are, at length, destroying our very freedoms.

How many times do American clergy and politicians need to be exposed before they are held accountable to the laws in which they are to magnify?

Chaos, how could it be otherwise?

Let me show you the otherwise….

“Hearken (Listen carefully) unto Me, my people; and give ear unto Me, O my nation: for a law shall proceed from Me, and I will make My judgment to rest for a light of the people. My righteousness is near; My salvation is gone forth, and Mine arms shall judge the people; the isles shall wait upon Me, and on Mine arm shall they trust.” (Isaiah 51:4-5)

“When thy judgments are in the earth, the inhabitants of the world will learn righteousness.” (Isaiah 26:9)

“But let him that glorieth glory in this, that he understandeth and knoweth Me, that I am the Lord which exercise lovingkindness, judgment, and righteousness, in the earth: for in these things I delight, saith the Lord.”