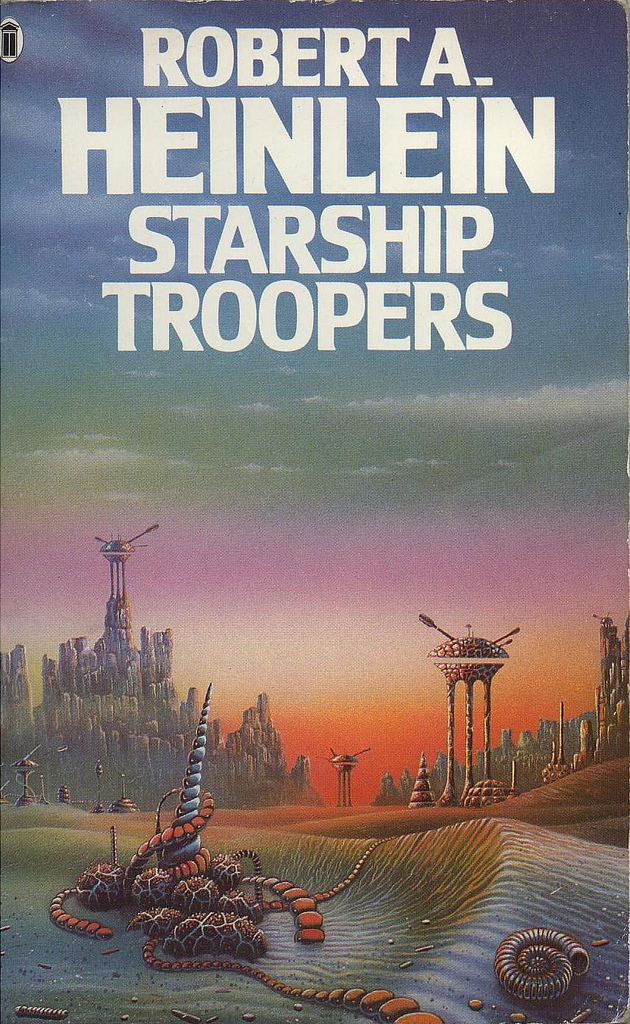 Today CNAV inaugurates a new category of article. It will feature reviews of classics and other books of times past. These books share one important feature: librarians literally would just as soon have you forget them. To that end they’re “pulling” these books and selling them off on eBay and similar services. So get then while you still can. First up today: a book that explores the concept and value of citizenship as few other books have.

Starship Troopers: a study of citizenship

In 1959, the late Robert A. Heinlein offered his readers a vision for the further development of human society. At first, Starship Troopers reads like a typical service novel. It opens with a hit-and-run raid—on an alien planet. Heinlein describes richly the technologies the soldiers use to go down, carry out their raid, and return. That alone would pique anyone’s curiosity. But Heinlein also describes the soldiers, and their relationship, in enough detail to make you read on.

And when you do read on, Heinlein takes you to the beginning of a particular soldier’s career. The novel in fact describes one man’s journey from civilian to soldier—to officer. Along the way Heinlein sets out his ideas for civic reform. That includes a discussion of citizenship and what it really means.

An army of superheroes

Recall Travis Smith’s recent release, Superhero Ethics. Your editor reviewed it here. As Smith described, superhero comic books began to appear in the middle part of the twentieth century. In fact, Starship Troopers appeared then, too. But Heinlein’s work had one major difference. The comic-book superheroes worked alone or in small teams. Heinlein’s Mobile Infantry has at least as many troopers in it (in absolute terms) as has the United States Army. (Or the Marine Corps, which more closely resembles the Mobile Infantry in training, organization, and operation.)

Each Mobile Infantry private, non-com, or officer can match, or over-match, the Marvel superhero Iron Man. Imagine Tony Stark building not just one Iron Man suit (for himself), but millions. Now imagine millions of ordinary boys training to fight like Iron Men. In fact they train to fight with or without their Iron Man suits. More to the point, they train to fight together, using co-ordination in strategy and tactics. Clearly Heinlein understood something Stan Lee, Bob Kane, and other such writers missed. One person alone, or even a small team, cannot meet a serious threat effectively. Heinlein’s rivals created larger-than-life characters working out their own resentments in action against equally larger-than-life enemies. Heinlein himself gave us the Mobile Infantry. In so doing, he empowered average men to fight like superheroes—and to leave their personal baggage home.

Travis Smith didn’t know about Starship Troopers. For that reason he didn’t think to pit any popular superheroes against the Mobile Infantry. To paraphrase: a single M.I. private could take on all the Avengers and knock them off without assistance. Furthermore, the Avengers are a squad. Imagine them taking on a platoon of Iron Men.

Heinlein doesn’t even make such comparison—though he does with now-current armored units. He does spend his time discussing this ineffable idea we call citizenship.

Heinlein had a unique vision of human society. Only those who lay their lives on the line for fellow humans or society can become citizens. Or rather: by laying one’s life on the line, one wins recognition as citizens. Nor need one serve in the military to meet this test. Heinlein’s Terran Federation invents ways would-be citizens can prove themselves, if they don’t qualify for military service.

Why does citizenship require such a challenging test? Key characters answer that and other questions along the way. In this case, an instructor at Officer Candidate School explains it to the story’s narrator.

To vote is to wield authority. It is the supreme authority from which all other authority derives… Force, if you will! The franchise is force, naked and raw, the Power of the Rods and the Ax. Whether…from ten men or ten billion, political authority is force.

But this universe consists of paired dualities…The converse of authority is…responsibility…Since sovereign franchise is the ultimate in human authority, we insure that all who wield it accept the ultimate in social responsibility. We require each person who wishes to exert control over the state to wager his own life—and lose it, if need be—to save the life of the state.

Heinlein might have drawn inspiration from Alexis de Tocqueville. Who famously said:

If he voted the impossible, the disastrously possible happened instead. And responsibility then [fell] on him willy-nilly and destroyed both him and his foundationless temple.

How citizenship came at that price

Troopers traces the development of a society that restricts the vote to veterans. When Heinlein finishes explaining it, it suddenly seems only logical. Briefly: the Third World War ends in effective capitulation. The Russo-Anglo-American alliance surrenders, not land, but prisoners of war the Chinese Hegemony will not release. (If that sounds familiar, it should! Heinlein anticipated the refusal of the enemy in the Viet Nam War to release all their prisoners.)

So Russian, British, and American troops return to societies now in total collapse. They’ve lost a war, most have no jobs, they resent their superiors surrendering their mates. And they know how to fight.

Probably those…veterans,…finding it necessary to hang some veterans, decided that, if they had to do this, they weren’t going to let any “bleedin’, profiteering, black-market, double-time-for-overtime, Army-dodging, unprintable” civilians have any say about it. They’d do what they were told, see? While us apes straightened things out!

Gradually a Federation arises from city-states having returning soldiers of like mind run them. The member states of the Chinese Hegemony—perhaps going through similar upheaval—eventually join.

In later years, the system endures, and for the best reason anyone can find: it works. Those who earn citizenship, will not dilute it. Those who haven’t yet earned it will find earning it legitimately, easier than making revolution.

If you separate out the aggressive ones and make them the sheep dogs, the sheep will never give you trouble.

Privileges and limits of citizenship

What begins as an emergency measure becomes standard practice. More than that: in Heinlein’s Federation, only a citizen can make a career in law enforcement. If the vote expresses authority, how much more so does enforcement of civil and criminal law!

But just as the society requires citizenship for law-enforcement service, so it does not grant citizenship to active-duty military. In this way, Troopers recalls a cardinal rule of ancient Rome before the Empire. Only those whom the electorate had chosen for the job could serve as magistrates inside Rome’s city limits. Generals, who commanded Rome’s armies (except the Four Legions of the Roman Garrison), must stay outside the city limits. A general who crossed the city boundary laid down his authority. This applied whether the general was celebrating a triumph—or not. Similarly, in Heinlein’s Federation, the privileges and immunities of citizenship apply only after honorable discharge.

Thus Heinlein did not plump for a military dictatorship. Instead he projected a society that balanced authority with responsibility.

In later life he became an anarcho-capitalist. Most of his later works attest to this. But at least in 1959, he realistically anticipated many of the troubles we have today. He also suggested a way to solve the problem of people exercising unlimited authority without responsibility. Those who seek the privileges, immunities, and authority of citizenship must first accept the responsibility of citizenship.

Why modern librarians would pull this from their shelves

One can readily see why modern librarians deprecate a book like this. A character—before he decides to become a citizen—actually believes “we have outgrown war.” Another character joins up for what he thinks will be a short term. After that, he boasts, “There will be some changes made. You wait and see.” The story’s narrator doesn’t have to wait long. His boastful fellow “boot” gets into worse trouble as his training goes on. Finally he strikes his senior instructor—whereupon the Army stripes his back and drums him out. Imagine the howls of outrage in Snowflake City! But it makes brutal sense. One planning to run for office by promising the impossible, runs into hard reality—and loses.

That Heinlein coupled his description of citizenship with his version of just-war theory would offend any “snowflake.” Add to it: Heinlein describes a truly implacable enemy. Authorities usually describe their enemies as vicious beasts lacking in any capacity for empathy. So what sort of enemy does Heinlein serve up for our would-be citizens to fight? Giant, intelligent spiders having a termite-like caste system and knowing nothing but war. Horrors! The very idea! Not because “snowflakes” don’t like spiders. Instead, because they don’t believe in irredeemable evil or in a war that can end only in victory or defeat.

But Heinlein also pushed the idea that citizenship can never be a birthright, and that one must earn it. That would offend a modern librarian worst of all. The problem: moderns confuse self-government with government of other people. Even Heinlein, in later years, did not make that mistake. He started plumping for “rational anarchy.” (Though in The Moon is a Harsh Mistress, he admitted such a society would not remain. Politics, like nature, abhors a vacuum.)

One can still find Starship Troopers in print. It is more than an entertaining read. One cannot call it amusement. Amusement tells you not to think. This book does make you think—about citizenship and what it really means.