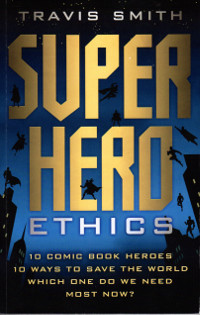 From Travis Smith, PhD, political scientist and commentator at The Weekly Standard, comes a new and unusual book. Unusual, that is, for a typical stuffy college professor. But in Superhero Ethics (West Conshohocken, PA: Templeton Press, 2018) Dr. Smith returns to a boyhood love: comic books. Here he chooses ten superheroes nearly everyone will recognize from Marvel or DC Comics. Then he asks seriously: of the ten, which would do the most good for the real world of today?

How Dr. Smith can write about superhero characters

For the purpose of Dr. Smith’s analysis and this review, superhero means any ET, demigod, or changed human being having any natural powers, or weapons and armor, beyond anything any “normal” human being could have. (In fact, Marvel and DC Comics jointly registered this word as a US trademark.) Travis Smith understands an important maxim many people miss. Any superhero, to attract a following, must relate in some way to the mere mortals who follow his adventures.

Travis Smith has collected comic books since 1986. He demonstrates an almost intimate familiarity with the material he covers. Has he missed any comic book, TV show (live-action or cartoon), or movie about superheroes? After reading Superhero Ethics, this reviewer doubts it. True enough, some material he mentions only to dismiss. Bill Dozier’s Batman TV show and movie (with Adam West) do not portray the Batman that Bob Kane originally created. Dr. Smith treats the “Dark Knight” that Michael Keaton, Val Kilmer, and Christian Bale portrayed on film. But by mentioning that show at all, Dr. Smith shows how thoroughly he has researched his subject.

And who better than a political scientist, to place any superhero in a political context? Any superhero has such a context. That context governs the world in which the superhero finds himself. (Witness Superman, Thor, and arguably the Green Lantern.) Usually it also governs the very world that created him. (Witness The Hulk, The Wolverine, Iron Man, Batman, Spider-Man, Captain America, and the leader of the Fantastic Four.)

Last, and most important: a superhero is a role model. Like it or not, people (especially those of the same gender) look up to such a person. Dr. Smith sets out to answer: which superhero deserves that the most.

Precedent in the real world

The real, human world has more precedent for superheroes than most people living today remember. That goes double for millennials. They know only from dry history-class recitation of the closest thing to a superhero team the world has ever seen. And by that, this reviewer does not mean King Arthur and the Knights of the Round Table. Instead, that team consisted of seven men, first to carry the title astronaut.

True enough, the government and press largely invented the superhero status and conferred it on the Mercury Seven. Those men lost that status almost as quickly as they gained it, with the nuclear test ban treaty. (Tom Wolfe explained that in The Right Stuff.) But while they held it, at least some of the Seven knew what their superhero status meant. Major John H. Glenn Jr. USMC understood it best of all.

With that in mind, Dr. Smith examines ten candidates. Each differs enough from the other nine to consider for unique qualities of heroism, leadership, and moral behavior.

As he describes the ten, Dr. Smith reminds this reviewer of what he saw in comic-book superheroes. Before one can consider anyone, super or non-super, as a role model, one must identify. Some reader, somewhere, will identify with each of the ten candidates Dr. Smith examines. Even one who has not read any comic books, has forgotten Saturday morning cartoons, and has never seen a “comic-book movie,” will find enough description of each candidate to recognize traits he (the reader) shares with at least one, and possibly more.

Dr. Smith selects his candidates for:

What could be wrong with this list? Only one thing: it includes no women. Does Dr. Smith feel that a mixed list wouldn’t offer close-enough comparisons? Unaccountably, he doesn’t say. But if so, one hopes he will write a sequel: Superhero Ethics Part Two: The Women.

One other consideration rates mention here. Except for Iron Man and possibly the Green Lantern, these ten embarked on their superhero missions by accident. The Hulk suffered from a laboratory accident. The Wolverine is a former human lab rat. Spider-Man suffered a spider bite. Superman is a refugee from a disaster that destroyed his civilization. Even Batman turned vigilante only after a vicious gang killed his parents in front of him.

In contrast, Hal Jordan (Green Lantern) and Tony Stark (Iron Man) act like self-made men. Interestingly, Dr. Smith rejects both from consideration as the most praiseworthy superhero. He would, therefore, seem to disapprove of self-appointing vigilantism. Batman has an excuse; Tony Stark and Hal Jordan do not. (Arguably, some shadowy ET group chose Hal Jordan. But he acts as though he, not they, made the choice.)

Here Dr. Smith makes clear: he is looking for a superhero eager to serve. Jesus says, “I did not come here to be waited on, but to wait on you.” (Matthew 20:28). And: “To whom much is given, of him much will be required.” (Luke 12:48) That goes double, triple, and multiple for superheroes. Stark and Jordan don’t seem to realize that, in Smith’s view.

And he makes an excellent case. Let us take the more stark (pardon the pun) example. If Tony Stark really wanted to serve others, he would not build the Iron Man suit for himself alone. He would outfit an army with such suits—a duly constituted army, of genuinely humble volunteers. Robert A. Heinlein wrote of just such an army. The Mobile Infantry of Starship Troopers (1959) are in fact Iron Men. But they possess humility and a willingness to serve as their society directs. Tony Stark does not.

This reviewer will not name here the winner of Dr. Smith’s contest of champions. Those who read his book will, at the end, understand completely his choice and his reasons. He lays out his case in a way that should cut all arguments short.

In addition, this oddball political treatise is a joy to read. Dr. Smith provides welcome relief from the abstruse—and arrogant—prose of so many of his colleagues. In treating superhero ethics, he defines an ethic for the non-super. Those worthy of the mantle (and not all his candidates are), would indeed want it that way. And Dr. Smith shows that, too.