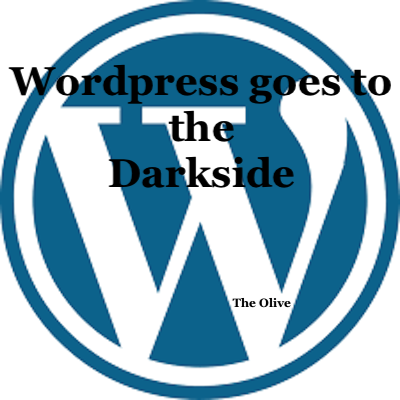 Item: WordPress.com Shuts Down Fellowship of the Minds With NO Warning for Supposedly Violating “Terms of Service” – Who’s Next?

(The Olive) I learned this morning (14 August 2018) that Fellowship of the Minds has been shut down by WordPress.com without warning for allegedly violating their “terms of service.” This writer is not at all surprised as FOTM goes against the grain questioning and exposing the dark side, meaning the progressive Democratic liberal bias that is so prevalent in the U.S. media.

First we heard that Alex Jones was banned by Apple, YouTube, Facebook, Spotify and a whole bunch of other platforms. Then this morning I learned WordPress.com shut down Fellowship of the Minds, a very popular blog. Then this afternoon I read a story on investigative journalist Laura Loomer being banned by Facebook. It looks like she is back on, but Facebook did remove the video of the Congress woman-to-be assaulting Laura. (At least temporarily)

It is quite clear here that the Leftist purge of non-conforming free thinkers is underway. Anyone who opposes the leftist mantra is a target. Laura Loomer was asking a Congressional candidate a question, and said future Congress woman ripped Laura’s phone right out of her hand. Physical assault by the Left is allowed, but a reporter questioning them is not. Sound like a dictatorship to you? Or how about a communist run government?

Laura Loomer cannot post a video of herself being accosted by a soon-to-be Congress woman no less – because that violates Facebook community standards, but nasty, vicious, and evil comments on her page are within Facebook’s community standards – after all Laura is a conservative and it’s open season on conservatives. Take a look: 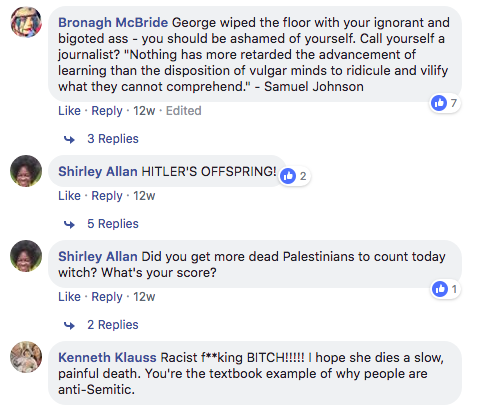 Directly from Facebook, preserving the insults other users threw at Laura Loomer.

This is merely the tip of the iceberg, but I’m sure you get the idea. Liberals can basically say and do anything they want to including threatening harm to people, attacking people physically, assassinating their character, spreading lies and innuendos, lying under oath, and committing crimes. In the political arena if you know the right people it is astounding what you can get away with. It is likely that even though Peter Strzok was fired, that will be the most serious penalty he will have to pay – despite having been one of the primary architects of letting Hillary go free, and setting in motion the attacks on Donald Trump. I could write a book on what Hillary and Bill Clinton have gotten away with. Remember – liberal privilege.

A liberal can also make outrageously stupid comments – and still remain the darling of the Democratic Party. I am of course referring to the empty-headed Alexandria Ocasio-Cortez.

I ask you – who in their right mind would vote for this woman? Can anyone actually be that stupid???

If you are a Conservative or express any conservative values, the rules are vastly different, you are held to a completely different standard. As a conservative, your opinion is automatically null and void. If you dare to fight back, you are immediately trashed in the media. Speaking out about your conservative beliefs not to mention fighting back against the liberal nonsense gets you banned on social media.

Tim Allen had a very successful show called Last Man Standing, ABC canceled it because Tim Allen is an outspoken conservative, a seriously taboo sin in Hollywood. Roseanne Barr made an admittedly unwise tweet, just one, and ABC cancelled her very popular show. Yet ABC is ok with Keith Olbermann’s (ESPN star) extremely vulgar tweets about Trump. As well, the Disney Channel (parent company of ABC) features Andi Mack, a show about a teenager exploring his homosexual identity.

They shut down Natural News social media sites and I said nothing, because I did not have time. (Editor’s Note: Natural News itself is still up.)

They shut down Fellowship of the Minds and I said nothing, because I did not want to get involved.

Then they shut down The Olive Branch Report, and there were no more conservative voices left to speak in my defense.

Wake up and speak up America! After they come for those of us who write and speak on conservative issues – defending America’s freedoms – they will come for the rest of you.

Since 2013, Christian news magazine The Olive Branch Report has featured the insightful writing and reporting of Greg Holt. His writing has been featured on American Prophet, American Clarion, Eagle Rising, Capitol Hill Outsider, Sons of Liberty Media, Rev. Austin Miles, and others. Greg is also the Publisher and Editor of Inspirational Christian Blogs.

Subscribe to my daily newsletter, and join hundreds of daily readers and receive news and relevant commentary.

The Flames of Envy